Also located in the city center, Nghe Temple, also known as Ngan Temple or “An Bien ancient temple” in Me Linh sub-area, adjacent to two sides of Le Chan and Me Linh streets, is an architectural work recognized as a national cultural and historical relic by the State, where is not only a famous spiritual destination of the local people and tourists but also has numerous unique historical, cultural and architectural values.

The long history of Nghe Temple 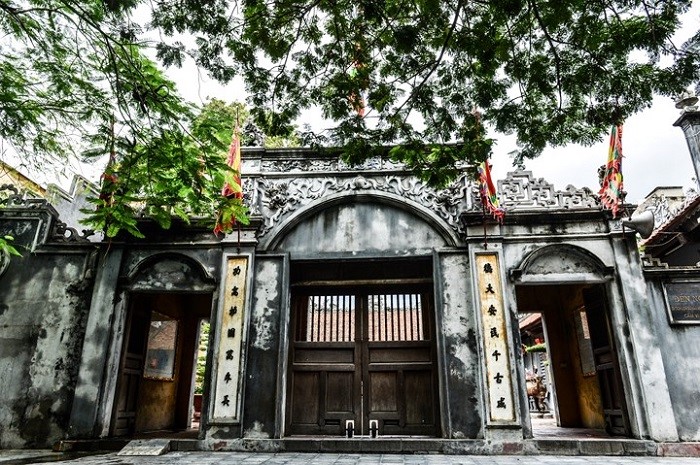 The majestic and ancient beauty of Nghe Temple

Nghe Temple is the place to worship female general Le Chan, a talented general in the Hai Ba Trung Uprising in the 1st century (AD 40 to 43), who came to the confluence land of Tam Bac and Cam rivers to establish Ven Village, which later changed to An Bien Village, the predecessor of Hai Phong City today. Legend goes that in the Tran Dynasty (the 12th - 13th centuries), Princess Thanh Chan (the title that Trung Vuong gave to female general Le Chan) omened in a dream to help King Tran Nhan Tong defeat the Champa invaders, therefore, she was given the title of Grandeur Greatness Nam Hai and An Bien Temple was repaired with the cost granted by the King (the epitaph wrote 100 Quan Tien - the ancient measurement unit of money).

Nghe Temple is a relic complex with the architectural style of the Nguyen Dynasty. The temple has a balanced and harmonious layout with a unique design compared to other temples and pagodas due to its open space on both sides according to the ancient concept of feng shui, yin and yang, heaven and earth. 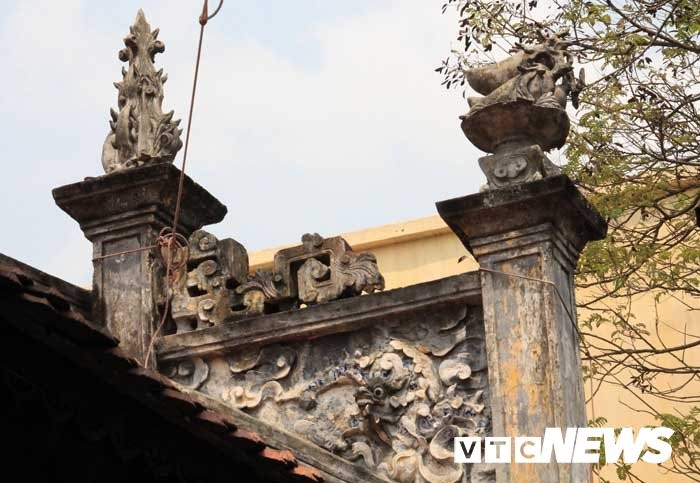 All sacred objects look to the temple’s center in motion pose.

The unique architectural feature of Nghe Temple is the sophisticated sculpture art on wood, stone and other materials by diverse carving techniques. 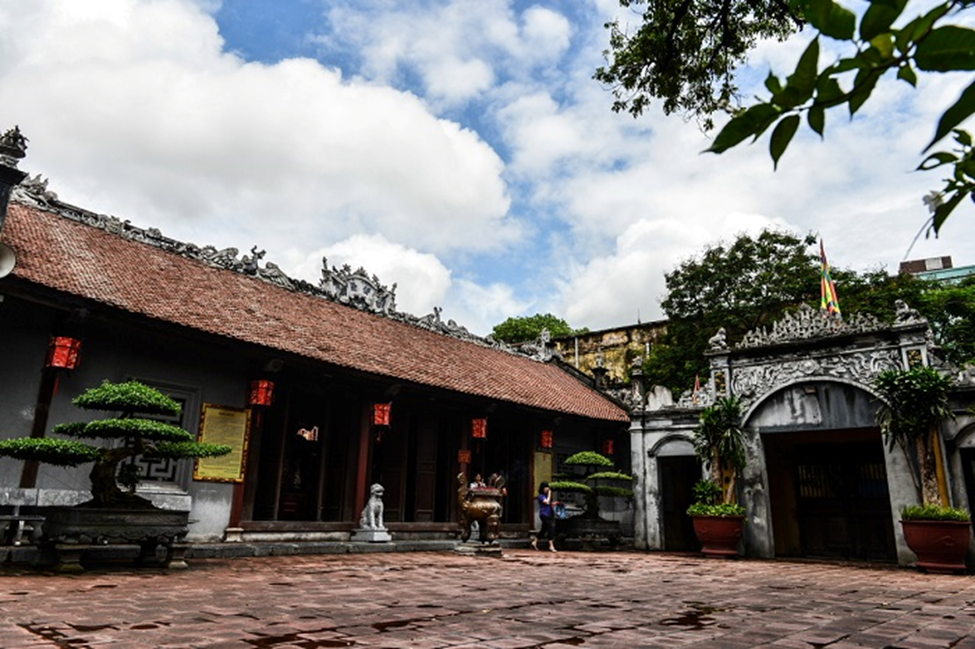 The back of Nghe Temple gate and the main hall

The gate of Nghe Temple has monumental architecture like the gates of medieval palaces, mausoleums and temples, opening up to the front hall consisting of 5 compartments supported by 24 ironwood columns resting on 24 elaborately and meticulously carved stones. Inside the front hall, there is an embossed stone instrument with delicate, soft and flexible sculptures. The instrument is made from a monolithic slab 5cm thick, 1m long and 1.6m wide, the front side of which is engraved with 2 dragons looking at the moon with clouds flying around, the back side is engraved with flying clouds and water waves. Beside the front hall is the two-storey incense burning hall with eight curved roofs, inside which is a massive stone bed made of precious stones from Mount Kinh Chu with elaborately embossed patterns of birds, animals, flowers and leaves, showing the sophisticated techniques of ancient artisans. At the end of the main hall is the harem, consisting of 3 compartments, in which the center is the statue of General Le Chan sitting on the throne and on the two sides lies the altars of her parents.

The outside of the harem

Opposite to the main hall, there is a stele house built and decorated in the style of an imperial palace. In the middle of the stele house, there is a stone stele of 1.5m high, 0.85m wide and 0.2m thick engraved with the biography and career of female general Le Chan in Chinese characters. The two sides of the stele house lies finely carved stone elephants and stone horses statues. 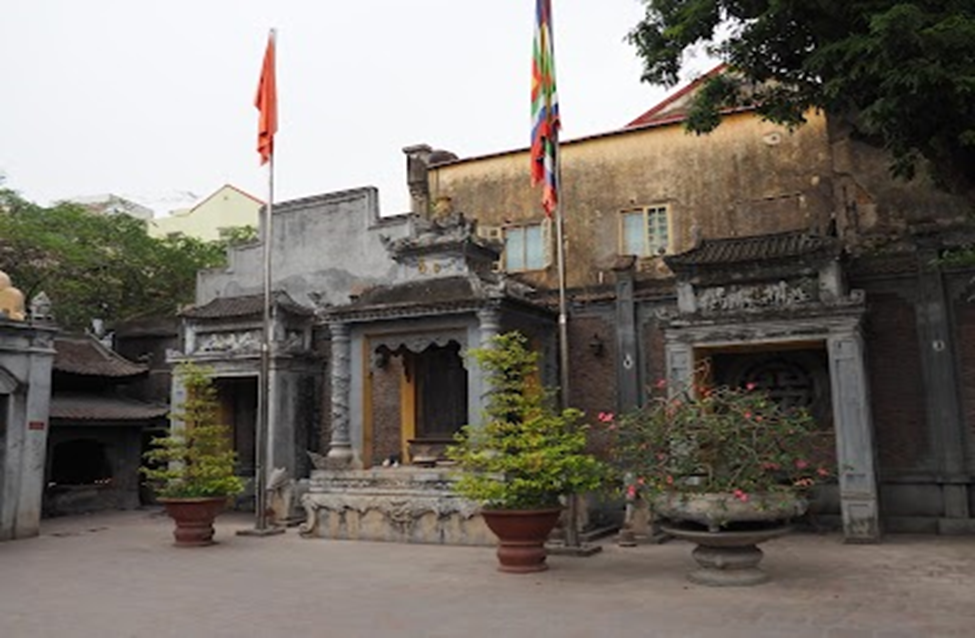 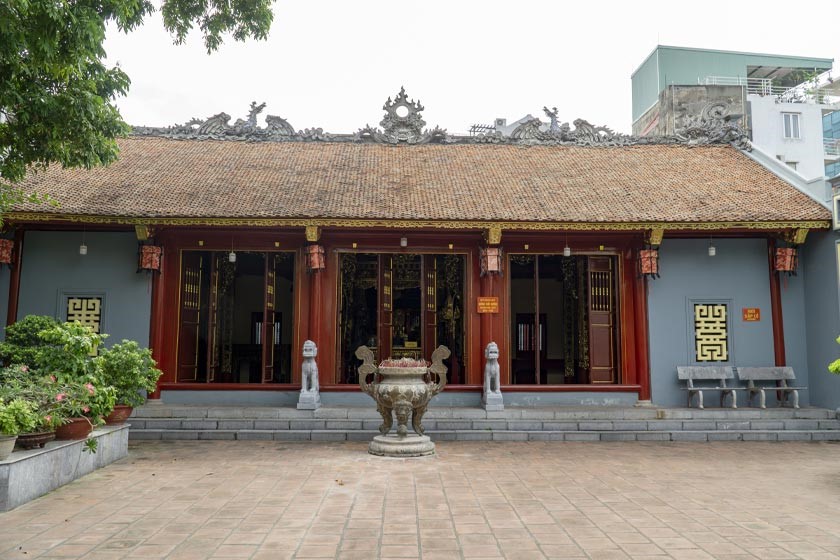 Over the periods, Nghe Temple was gradually embellished and extended, but still kept its historical, cultural and architectural beauty . Every year, on New Year holidays and on the anniversary of the birth and death of female general Le Chan, the Temple’s management board regularly organizes special and meaningful festivals to commemorate the talented female general of Hai Phong City.

With long-standing values of history, culture and architecture as well as spiritual and religious significance, Nghe Temple deserves to be a national historical and cultural relic and a leading tangible and intangible cultural heritage of Hai Phong City. For local people, Nghe Temple is an outstanding religious place where all people come with their care respect and gratitude. For tourists, Nghe Temple is an attractive spiritual destination where people can listen to the echoes of history and their inner peace...

The article refers to information from the websites: baoxaydung.com.vn and haiphong.gov.vn