Annually, on the 08th of February of the lunar calendar, residents at coastal area of Haiphong and tourists from different areas excitedly attend the Festival Nghe Temple Festival and An Bien Temple Festival, which are among the biggest festivals of the year in the port city, in order to commemorate and honor the great contributions of Saint General Le Chan, who gave birth to Hai Tan Defense- the ancient name of Hai Phong today. 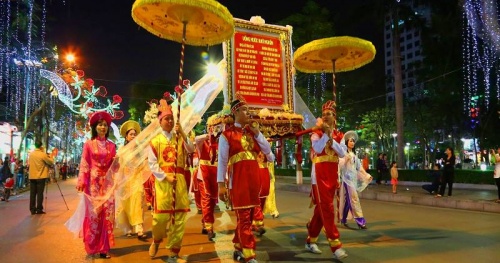 Back to history and ancient documentaries, Saint General Le Chan was from An Bien of Dong Trieu District of Kinh Mon Capital (which is now An Thuy ward, Dong Trieu district, Quang Ninh province).

Saint General Le Chan hailed from a disciplined family that offered teaching and medicalcures for locals; her father was Le Dao, her mother was Tran Thi Chau. At that time, Le Chan was well-known for her beauty, wit, martial arts and extraordinary will. Having heard of Le Chan’s fame, Grand Administrator To Dinh insisted on making her his concubine. The Le Dao were resolute in turning down the proposal, Le Chan and her family retreated to coastal region of An Duong district. The furious To Dinh did harm to Le Chan’s parents.

Having harboured a strong will, Le Chan alongside her family and villagers reclaimed the coastal area of An Duong, spawning a new prosperous settlement. Recalling her fatherland, Le Chan named the new settlement after her hometown An Bien. For 10 years, Le Chan attempted to accumulate foods and equipments, training her soldiers, forming coalitions with patriotic forces from everywhere while awaiting the right time to take revenge for the family and country.

In spring40 AD, Trung Sisters raised the uprising flag in Me Linh, fighting to expel East Han army. People rose up everywhere in response. From An Bien base, Le Chan and her righteous soldiers swiftly joined force with Trung Sisters’insurgent army. In no time, the insurrection garnered resounding victories. Thanks to her great contribution to the victory, Le Chan was promoted by Trung Sisters to the position “Chief of command” cum Command in charge of Hai Tan Defense. Under instruction, Le Chan returned to An Bien to continue shoring up her forces, digging trenches, building up walls so as to defend the country’s pivotal East.

From the consciousness of the locals, Nghe Temple Festival and An Bien Temple Festival have been two important events of community living in the coastal area of Haiphong. Each year, when spring comes, everyone is zealously on the lookout for Le Chan Commemoration Festival on her birthday. The events splendidly take place from the 08th to the 10th of February in lunar calendar. During those three specific days, whatever they do or wherever they are, people make time to visit the temple and offer incense to Le Chan The Goddess Saint and pray for an uneventful, fortunate and happy new year. Such goodwill gesture sepitomiseHai Phong coastal people’s distinct cultures.

The focal point of Nghe and An Bien Temple Festivals is the processions, whose length is about a kilometer between the temples. During the processions, music is played melodiously, everyone is walking solemnly and respectful and grateful to the port land’s deity. The processions stop at the temple. The dragon throne, hat and other offering possessions are taken inside the temple for three days. Offering ceremonies are performed twice each day.

According to tradition, beside flowers, fruits and sticky rice, clean and eviscerated pig are used as sacrificial offerings. Afterward, this meat is equally shared among villagers. Additionally, offerings to Saint General Le Chan include giay cakes, chicken, goose, clams, snails, crabs and vermicelli. Such dishes are indispensable when it comes to offerings to the Saint Goddess. As the legend goes, those dishes were Saint General Le Chan’s favourites during her lifetime.