Hang Kenh communal house - a 300 year-old spiritual place features Vietnam’s ancient architectural style, preserving the culture, history and carving art of the portland. The communal house was built around the 17th - 18th centuries and was expanded to its current appearance in 1905. This place was formerly built to worship the village tutelary god, then was ordained by King Tu Duc to worship King Ngo Quyen, who had the merit of defeating Nam Han invader on Bach Dang River in 938, opening an era of long-term independence and self-reliance for the Vietnamese nation. Hang Kenh communal house is located at No.55 Nguyen Cong Tru Street, Hang Kenh Ward, Le Chan District, Hai Phong City, where remains valuable relics, the most special of which is the stone stelae to register scholarly laureates in competitive examinations in the period of 1460 and 1693. According to many sources, the construction of Hang Kenh communal house was started in 1719, during the reign of King Le Du Tong. It underwent two restorations in 1851 under King Tu Duc’s reignand in 2006-2007.

Hang Kenh communal house covers an area of about 6000m2 facing to the west. The architecture and decorative arts of the communal house are in the style of the Later Le and Nguyen dynasties. The main building materials are ironwood, with a traditional architectural layout including: Dai Dinh (the main hall), Toa Ong Mong (the worshiping hall), and the sanctuary hall. In addition to the main architecture, there are also Giai Vu halls (the corridor halls), the literature hall and the semicircle lake. 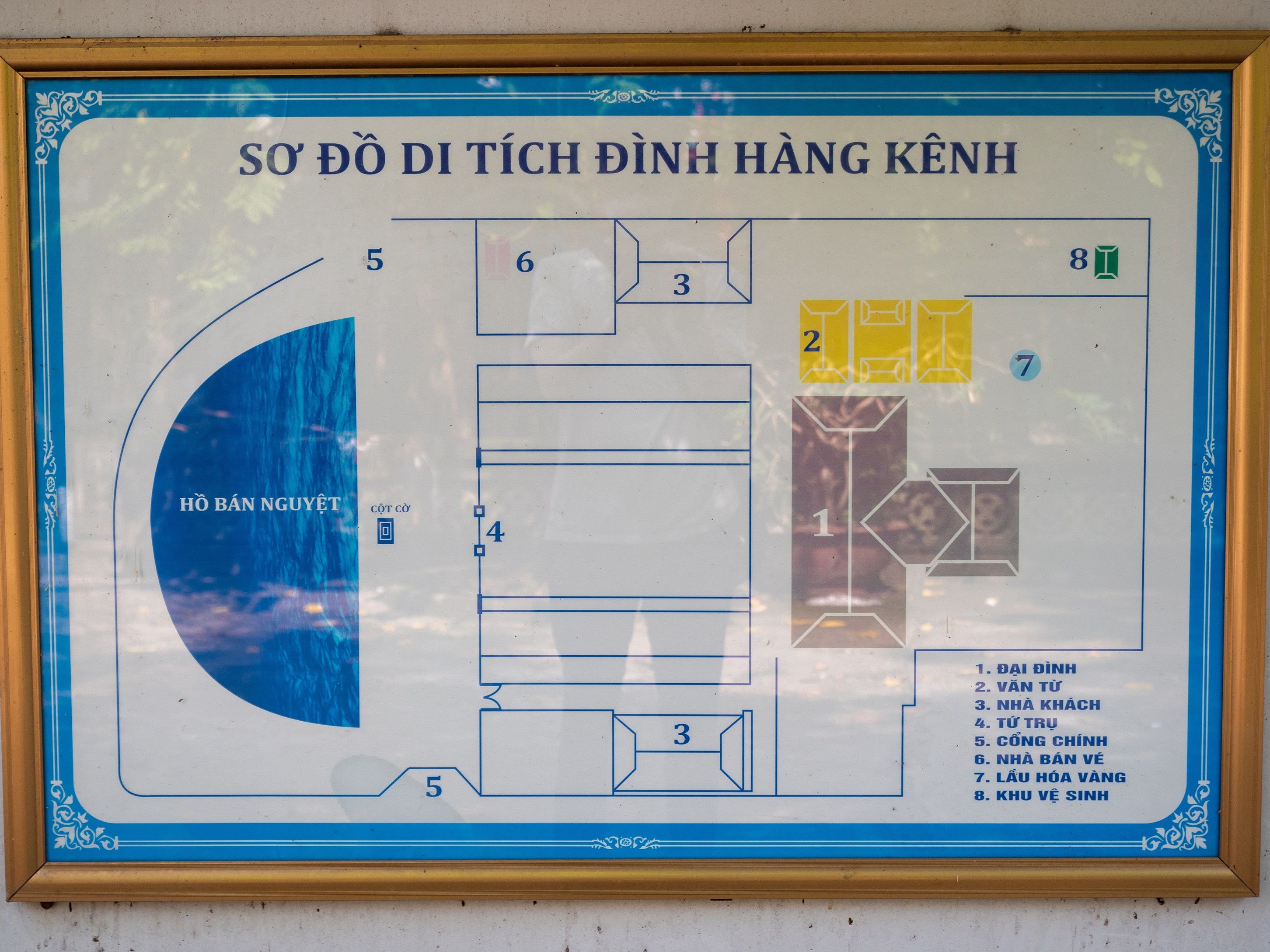 A corner of the semicircle lake 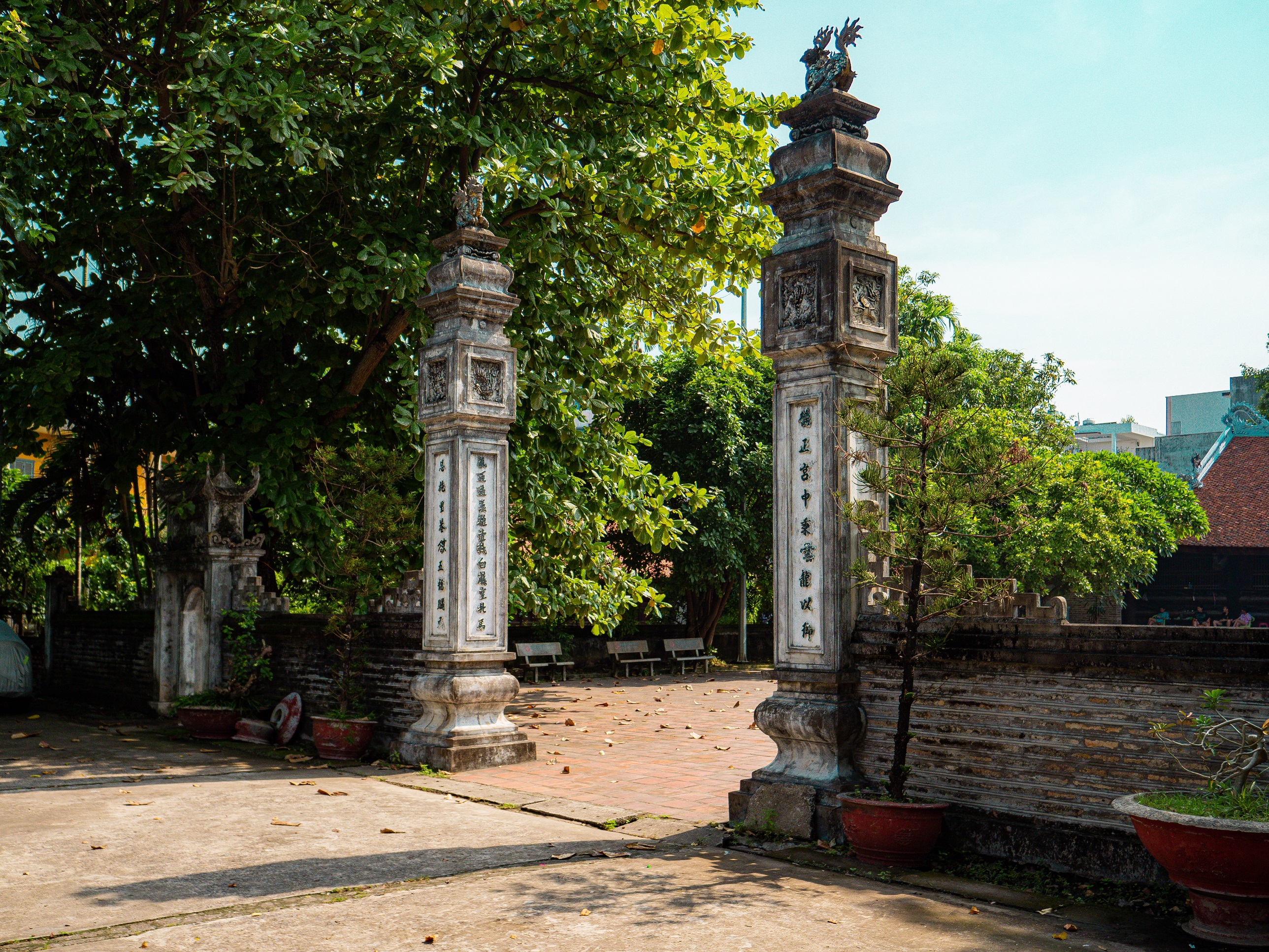 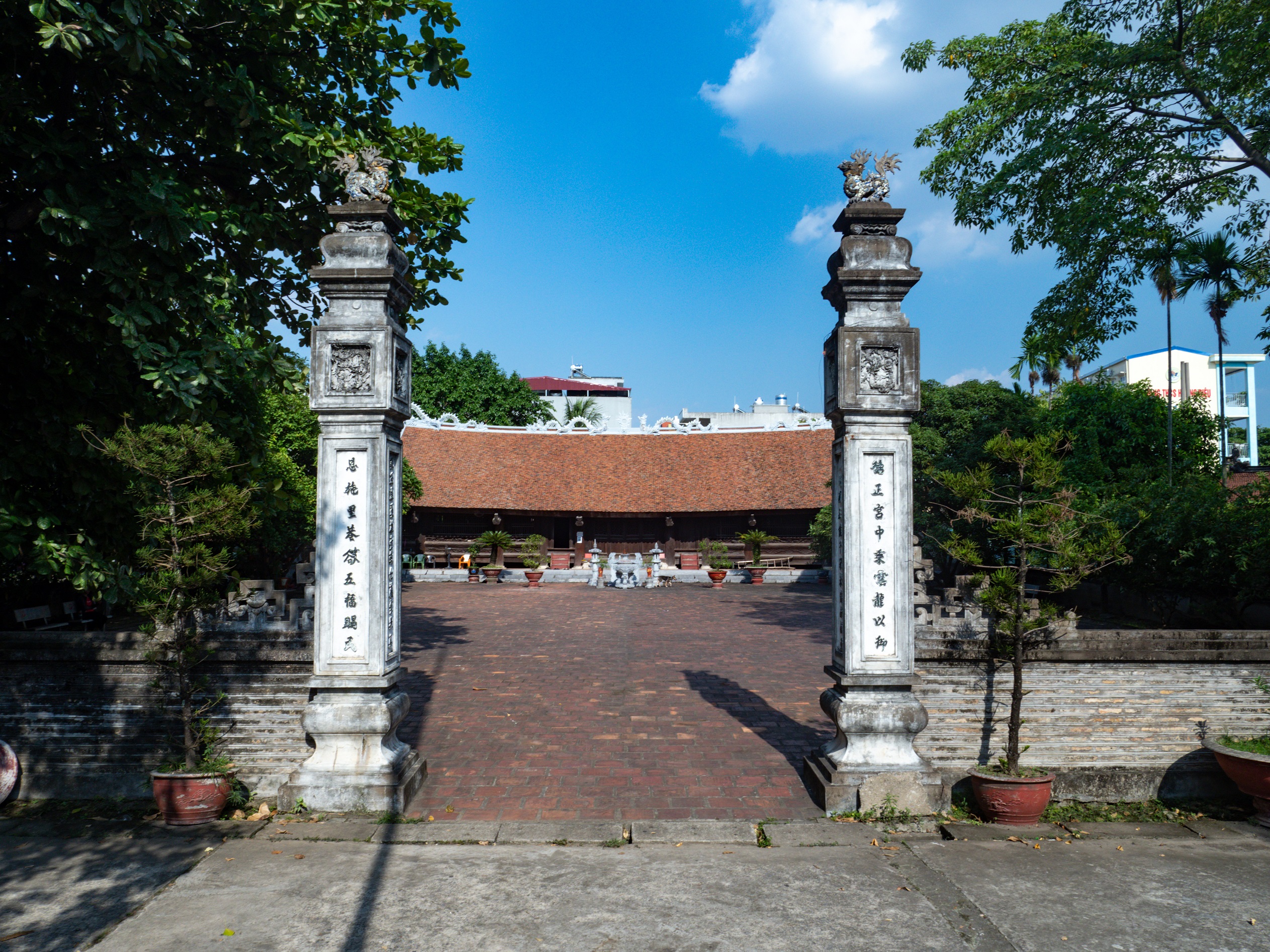 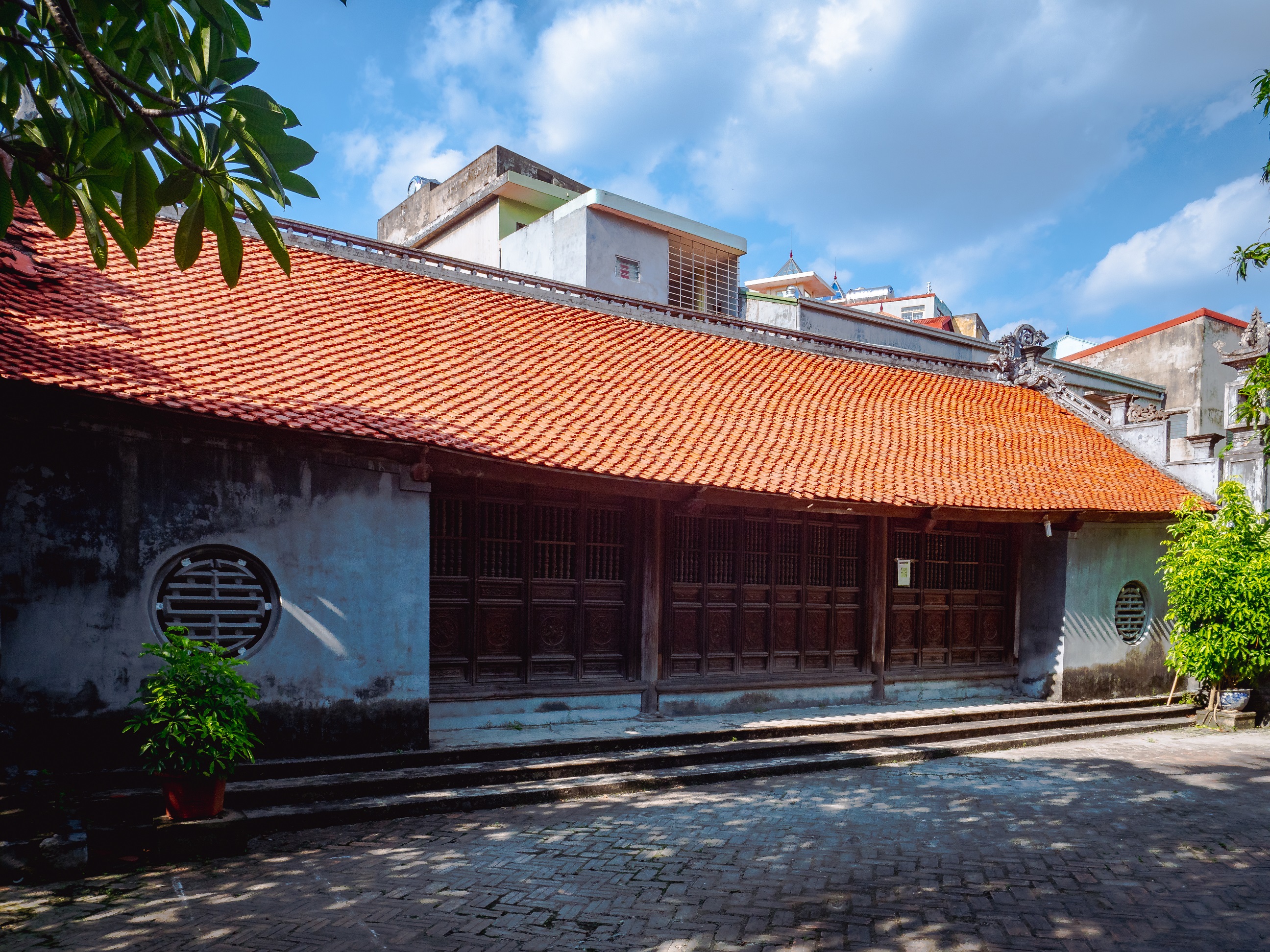 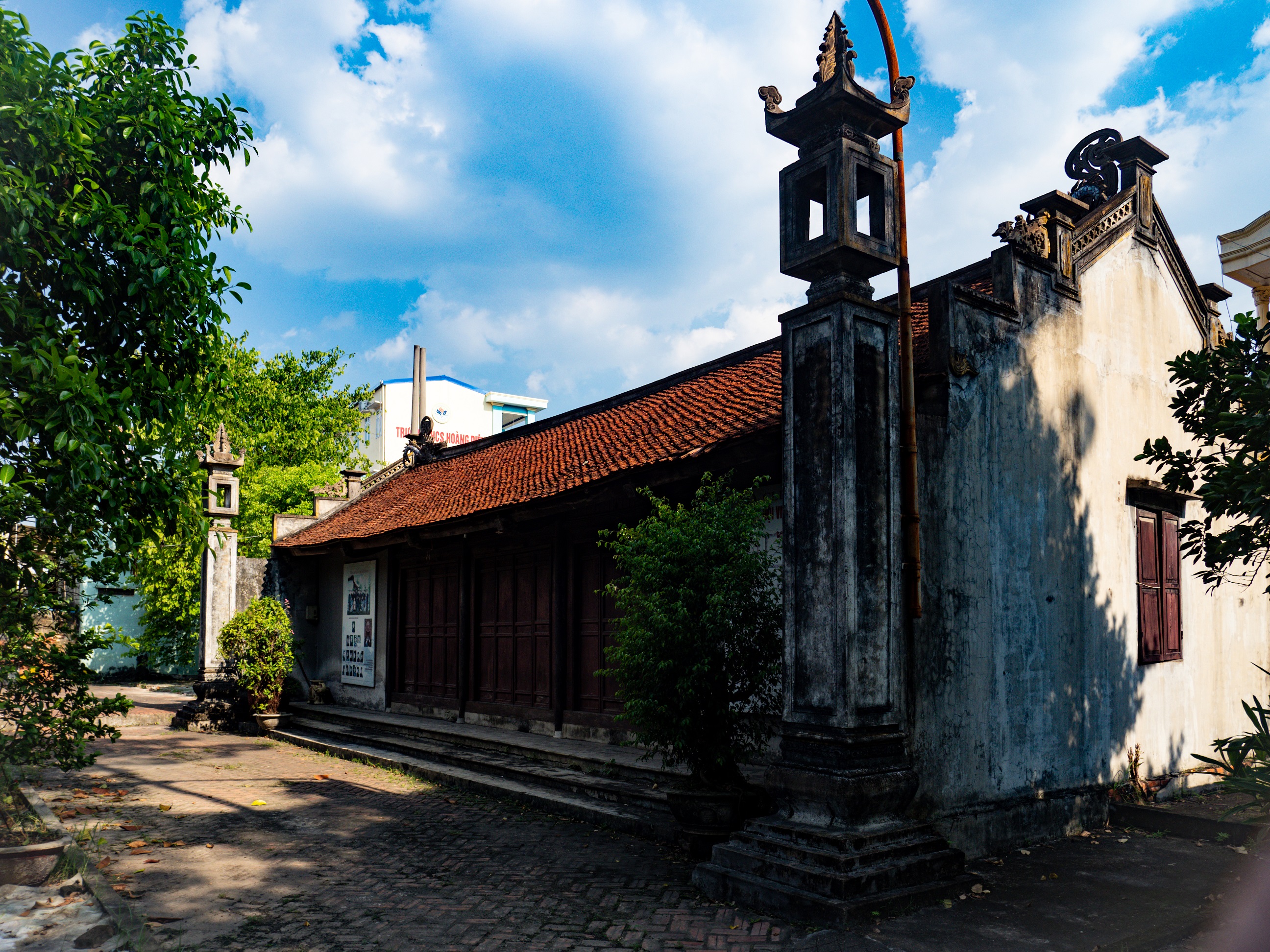 The right corridor hall
The main hall is the most important structure in the overall architecture of the communal house. The main hall has a floor plan in the shape of the Chinese letter "Cong" (the Latin letter H), including the front court, the worshiping court, and the sanctuary court. The frontcourt of 10.25m wide and 8.25m high is placed on a 3-step pedestal higher than the yard, having 7 beams with 32 pillars, dividing the communal house into 5 compartments. Each pillar has a circumference of about 2m, a height of 5m, and was put upon blooming lotus-shaped carved stone bases. The sides of the main hall are ironwood doors with only four corners made of bricks. Inside the main hall, the floor structure of the boat bed is still preserved with ironwood planks on both sides, about 01m above the ground. The roof of the communal house is covered with mussel-scale tiles, there are two dragons gathering the moon in the middle of the communal house. The two sides of the communal house roof are designed quite originally with two dragons crawling out and then turning their heads back to hold the arrises. The four corners of the roof are curved in the shape of four crocodiles with two dragons entwined with each other as if to bring the whole communal house up. 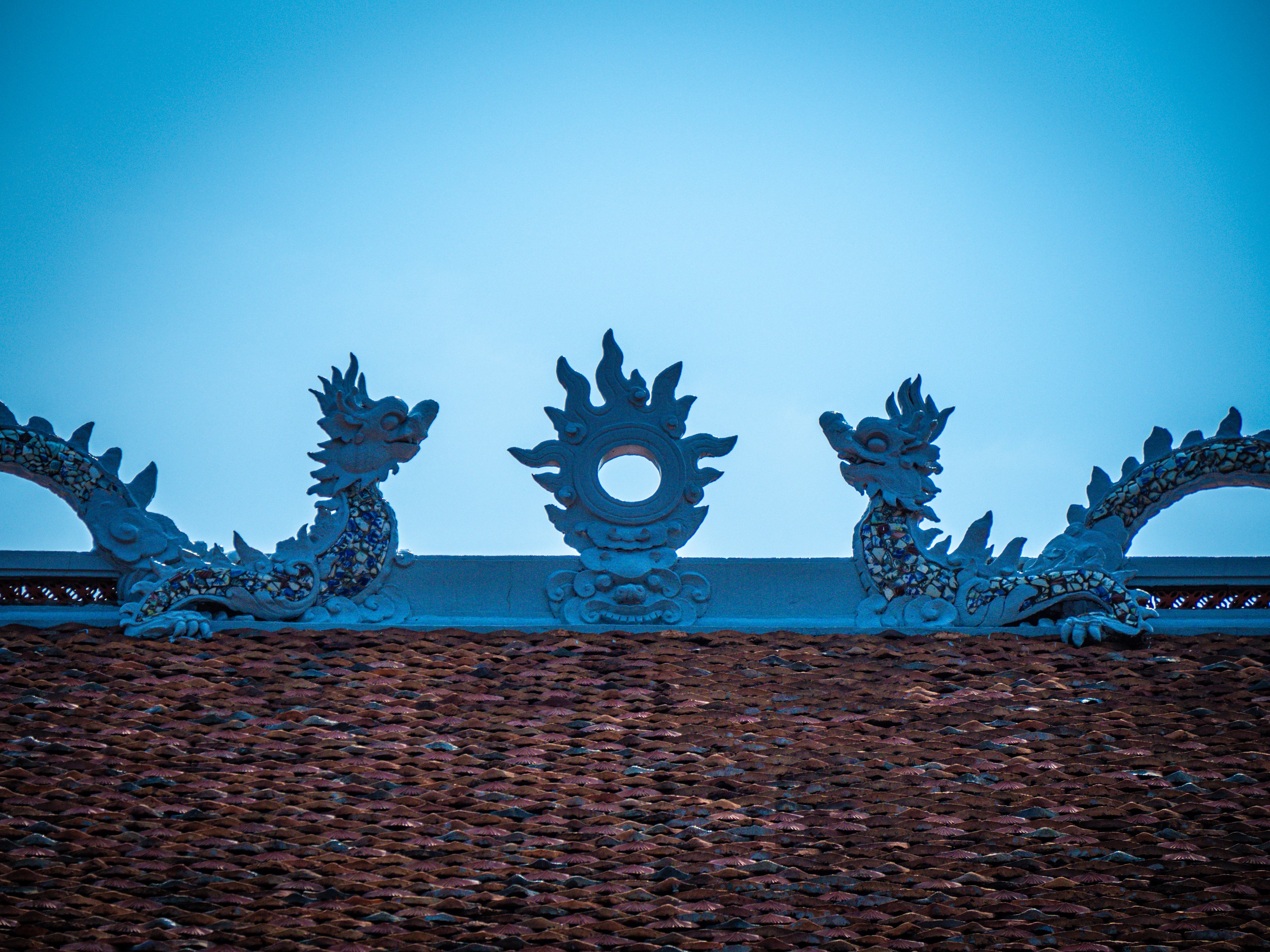 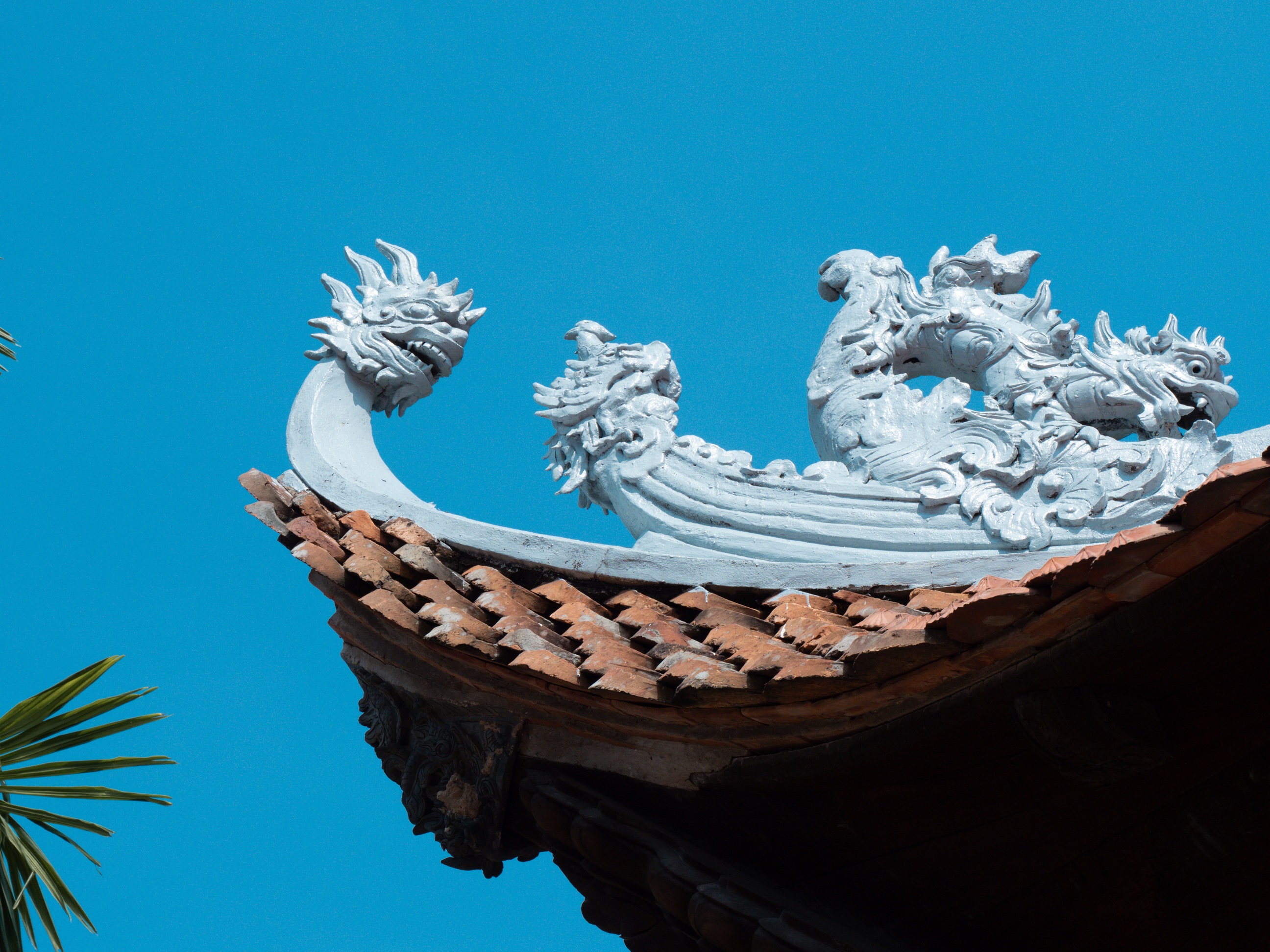 The roof with sophisticated carvings 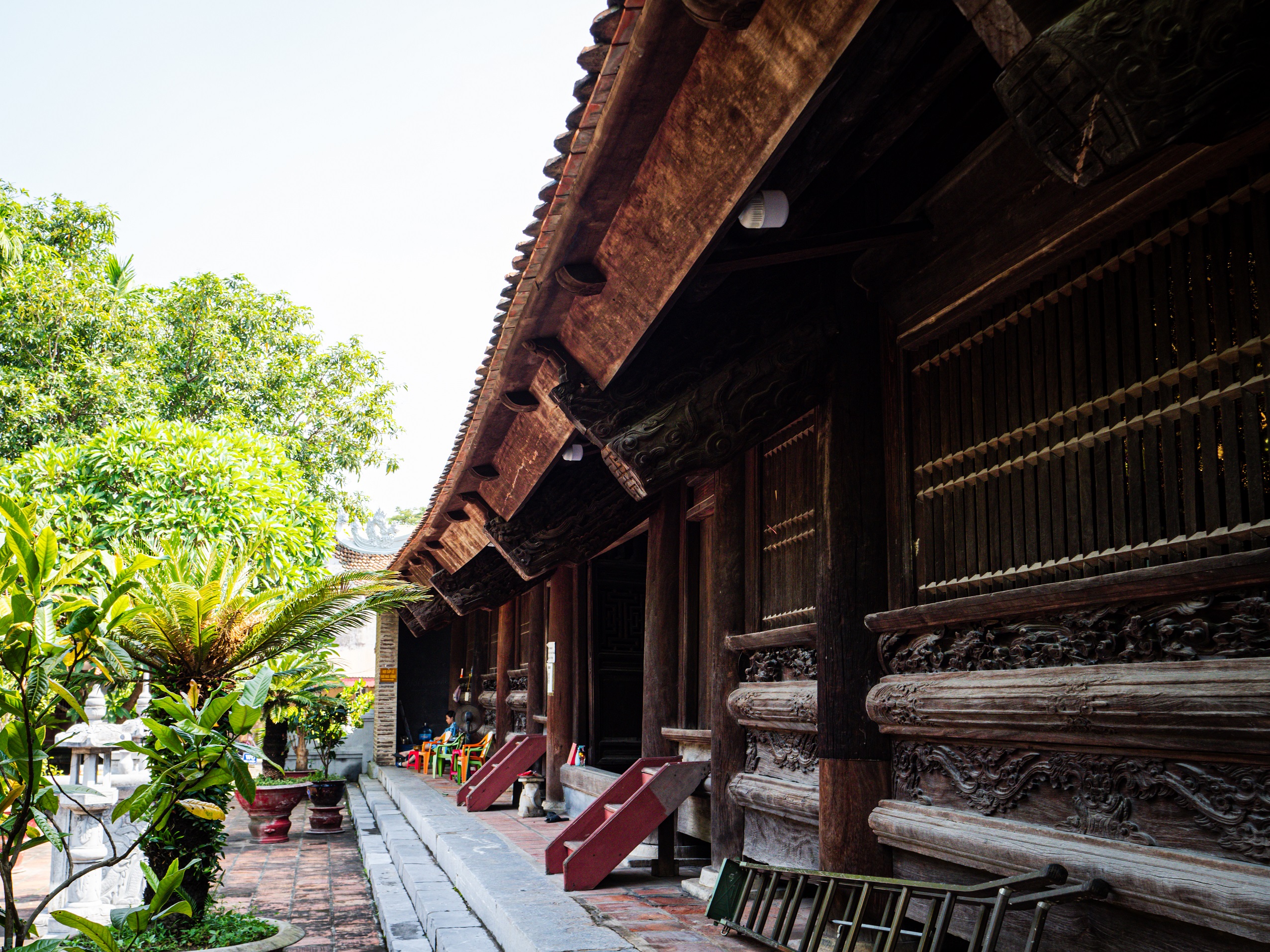 The structure of a wooden house in Hang Kenh communal house 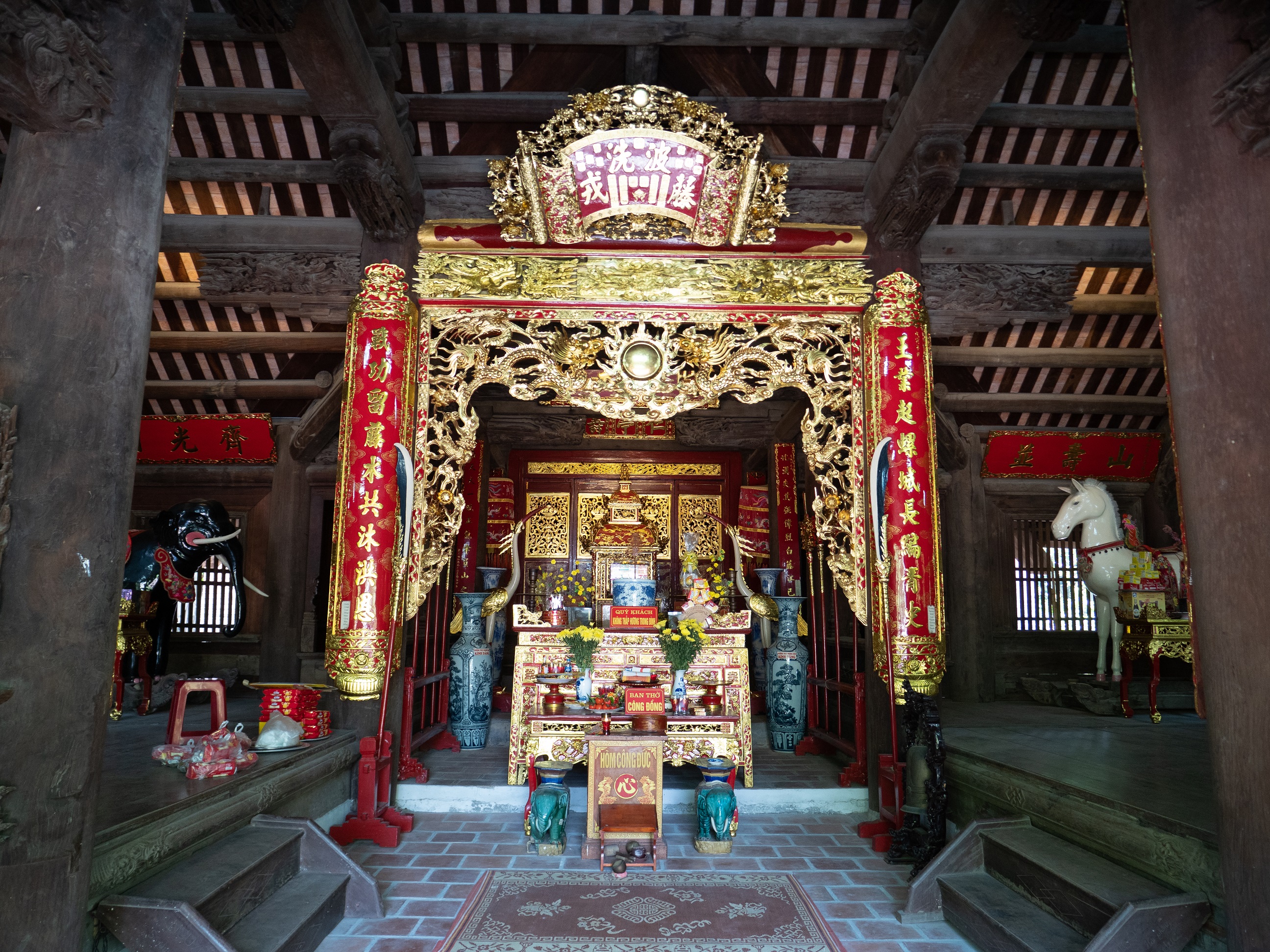 Inside the main hall, Hang Kenh communal house
Behind the main hall is the sanctuary hall, a solemn place worshiping King Ngo Quyen. In this area, there is a statue of King Ngo Quyen sitting on a dragon throne. In front of the statue, there are a small boat and a chunk of wood that represents rows of stakes in Bach Dang River. 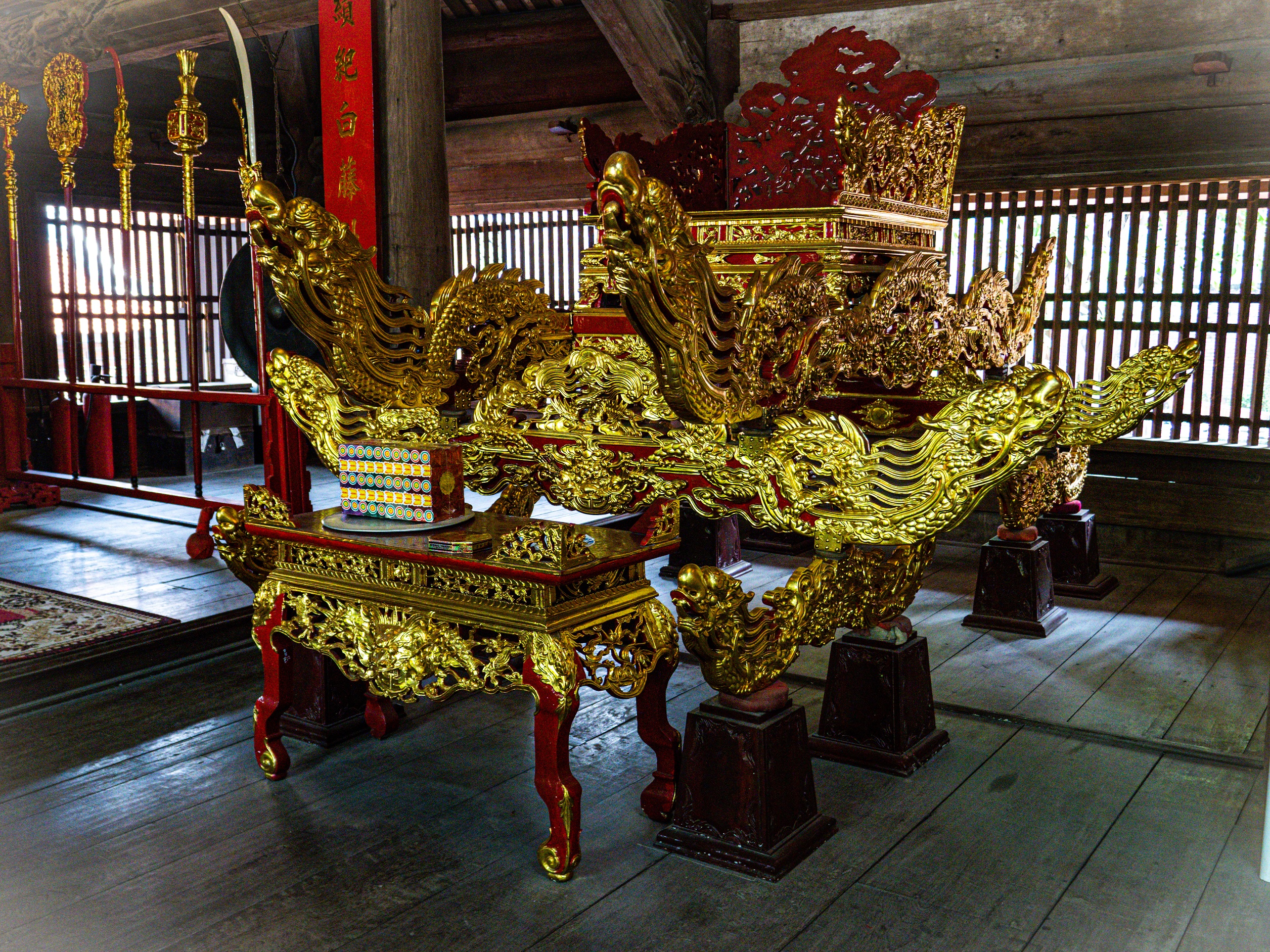 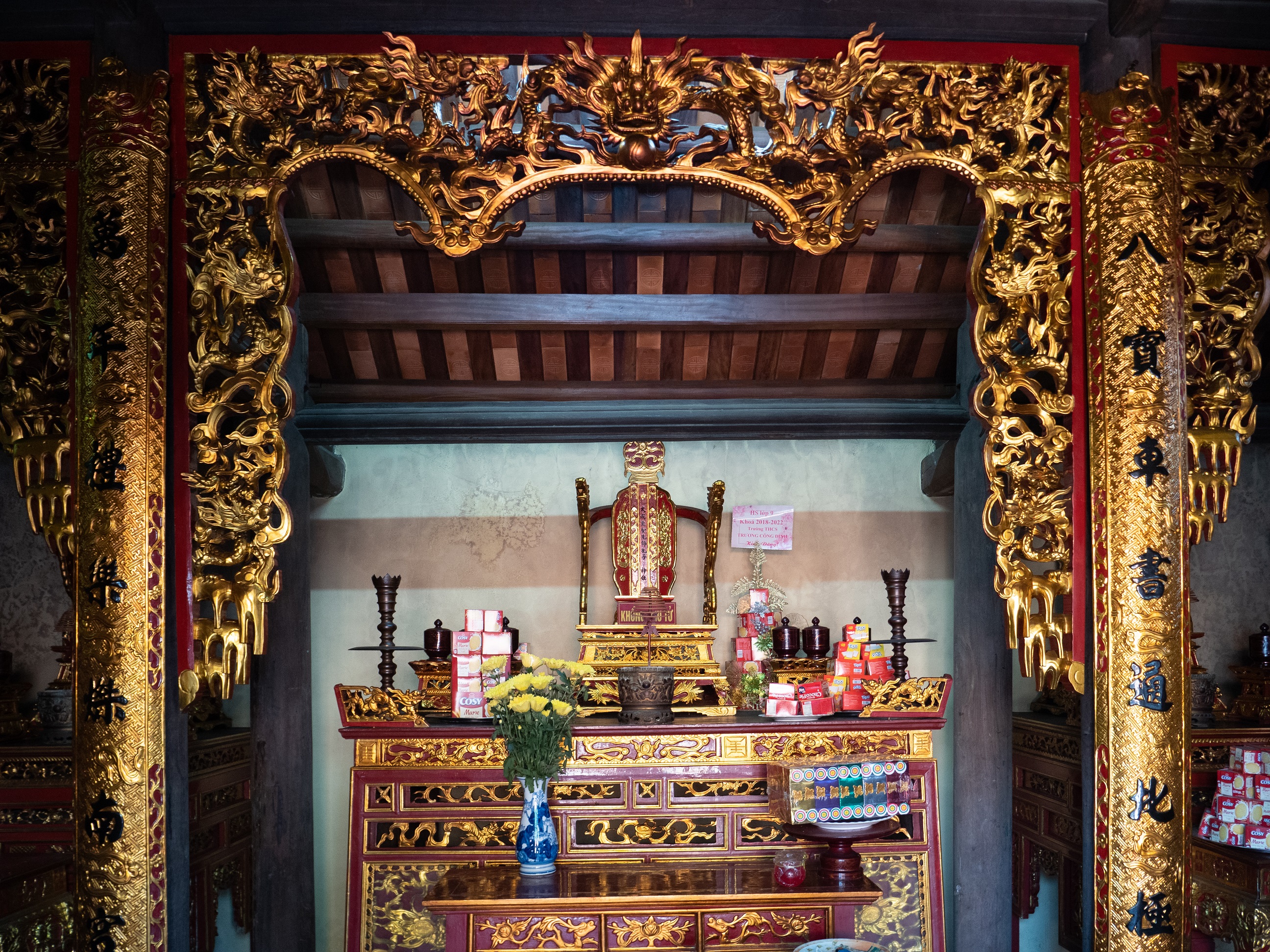 The altar of Confucius and Confucian scholars at the literature hall, Hang Kenh communal house

In addition to the unique architectural features, Hang Kenh communal house also has a high value in terms of sculpture. Coming to the Communal House, visitors will be impressed by the carving pieces of dragons, clouds, flowers and plants floating on the surface of the planks, at the foot of the bars, the beams and on the door system. The artists used the image of the dragon - one of the "four supernatural creatures" of the Vietnamese people as the main theme of the sculptures. Through the skillful hands and creative ability of artisans, 308 dragons in the carving pieces with different shapes and postures are carved in each nest with mother dragon and baby dragons intertwined with one another among sophisticated sculptures of grass, plants and flowers. According to historians, there are hardly places where artisans use this kind of technoques ("bong hinh" or "cham long") to carve but in this communal house. 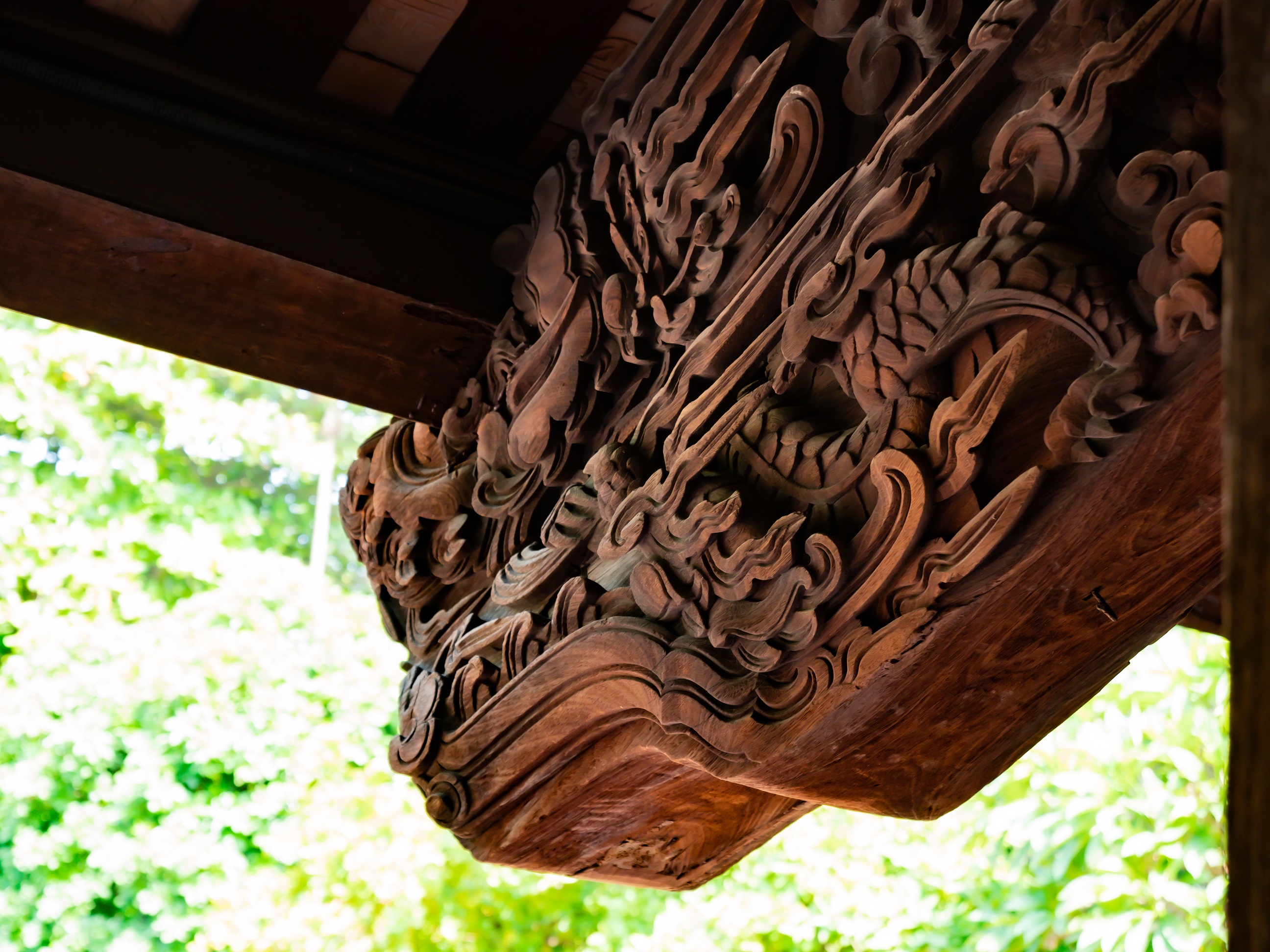 The sophisticated sculpture of dragon at the ends of beams, at Hang Kenh communal house. 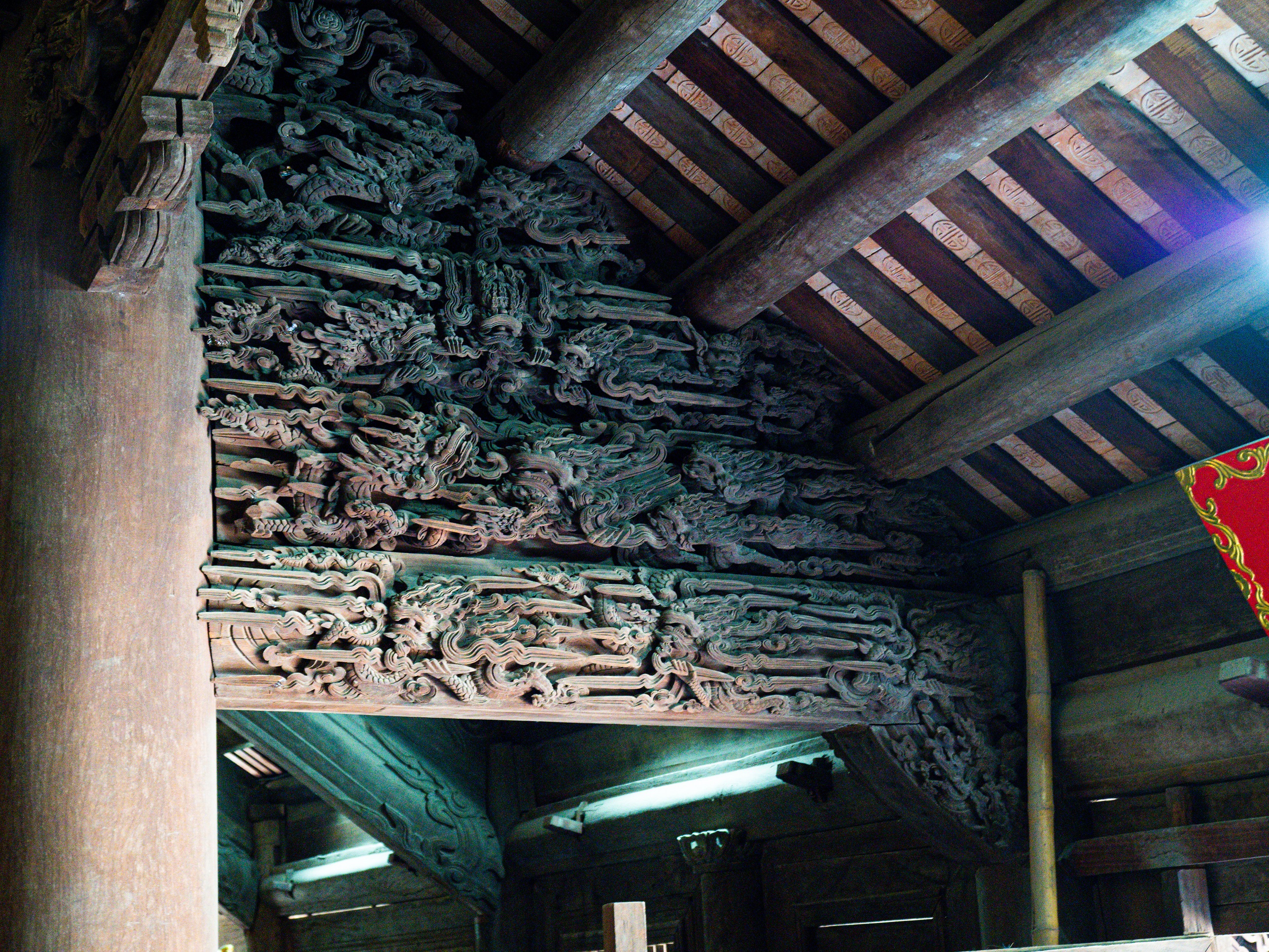 The sculpture of "Dragon Nest" at Hang Kenh communal house

Previously, Hang Kenh communal house often held a annual festival to pray for good luck in the middle of the second week of the lunar calendar to commemorate King Ngo Quyen with various performances of A Dao singing, wooden crane dancing, ancient Cheo singing, and many fun games to create an atmosphere for health and prosperity in the early spring. Today, those traditional activities are gradually being restored. At the communal house yard, water puppet shows, Cheo art performances, Dum singing, etc. are often held with open local people’s attendance. Not only that, the communal house yard is also a sacred place, often chosen by schools in the District to organize commencement ceremonies for student groups before examinations for excellent students. On spring days, local people also often visit the communal house for sightseeing and taking photos. Despite many ups and downs, Hang Kenh communal house’s beauty and values remain almost intact with a large and magnificent wooden architecture that few works can have that scale, a place to preserve historic and cultural values, sculpture art and unique architecture; a spiritual spot for local people and tourists from all over the world./.