Opening a peaceful and tranquil landscape, Ha Long Bay - Cat Ba Archipelago is made up of 1,133 limestone islands and islets of all shapes in emerald - green waters. Here has witnessed the enormous changes in the development history of the Earth. The primeval forest rich in flora and fauna, limestone pillars covered by deep green tropical plants, majestic cave system have shaped an unique Ha Long Bay - Cat Ba Archipelago.

Ha Long Bay in Quang Ninh province was inscribed by UNESCO as a World Natural Heritage in 1994 and 2000 thanks to its outstanding natural landscape values and geomorphological values. Cat Ba Archipelago is located in the administrative boundary of Hai Phong city, recognized by UNESCO as a World Biosphere Reserve in 2004 for its ecological values, humanistic factors and typical biodiversity along with great potentials for sustainable development.

Ha Long Bay - Cat Ba Archipelago belongs the northeastern Vietnam, 165 kilometres from Hanoi capital to the East, having the core zone of 65,650 hectares surrounded by the buffer zone of 34,140 hectares.

Passing by Ha Long Bay - Cat Ba Archipelago to admire and enjoy the vastness of the endless sea and sky, the elegance of the rocky mountains and caves. The harmony of stone, water, forest and sky creates an ever-changing natural world of irresistible beauty and fascination. The multi-coloured landscape reflects the grey of the rock, many shades of green in the forest, and transitions between deep blue and bluish-green from hidden lakes to lagoons and to sheltered inlets of the sea. Even more interestingly, the landscape undergoes changes as soon as it starts to rain. The greyish limestone rocks immediately turn black, because of wetted blue-green algae, giving the landscape a sombre grandeur. Along bay, so many small, lovely white sandy beaches nestle among the rocky mountains with the immense green of tropical plants on the top. 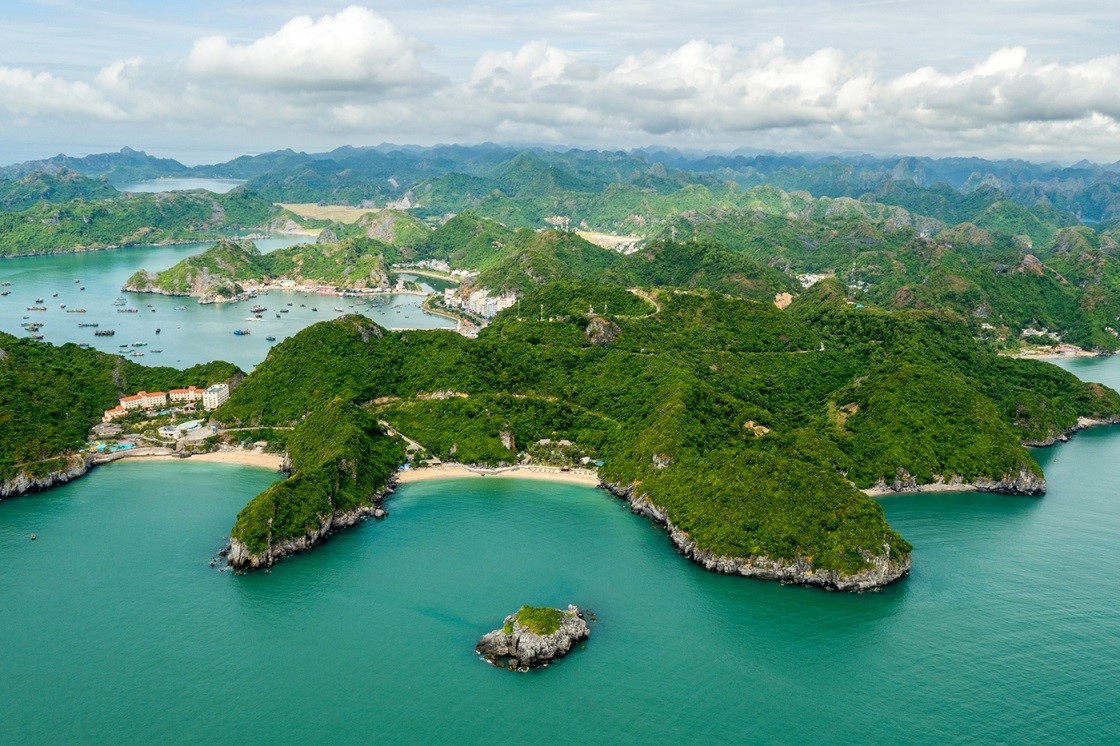 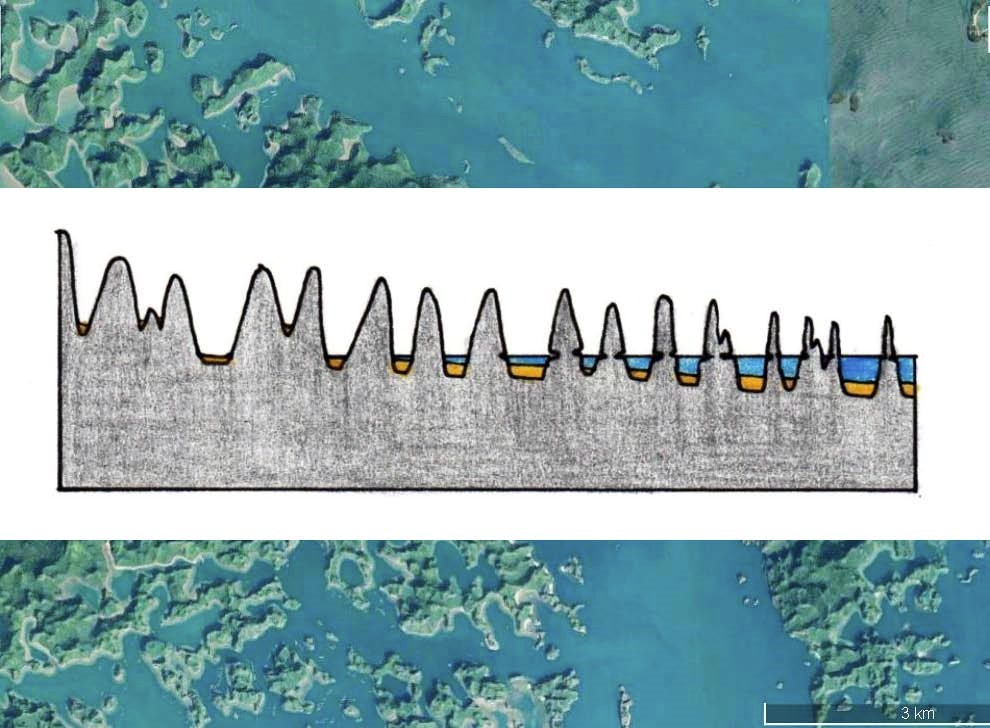 The layers of plateaus and carbonate sediments, dating from the Paleozoic era to the Cenozoic structured Ha Long Bay - Cat Ba Archipelago as of now. Many sedimentary formations hold paleontological traces in different fossil forms in which groups of flora and fauna were extinct or almost extinct on earth. The presence of primeval forests, bays, islands and islets determines an exceptional example of the continuous development and movement of karst topography, fengcong (peak-cluster depression) and fenglin (tower karst) over millions of years under the humid tropics, progressing greatly from high mountains toward the sea where karst terrain is seventually inundated by the sea at base level.

Researchers have discovered many endemic plants, which are only adapted to limestone island surface, nowhere else in the world such as Cycas tropophylla, Chirita drakei, Livistona halongensis, Impatiens verrucifera, Schefflera alongensis, Paphiopedilum concolor...The succulent plants such as Euphorbia antiquorum (Euphorb.), Dracaena cambodiana (Liliac.), Cycas sp. (Cycad.), and Sarcostemma acidum (Apocyn.) which coat the vegetation here in the drought tolerant appearance of desert plants.

On the mountain top of the Cat Ba National Park, there appears a typical and quite rare inundated vegetation in Ao Ech (Frog Pond). The inundated willow trees (Salix tetrasperma) normally develops and distributes in the northwest of Vietnam. Surprisingly, it appears in Cat Ba Archipelago with a population of almost mono-dominant species. In spite of a small area of 3.6 ha, it contains a amazing plant genetic source. 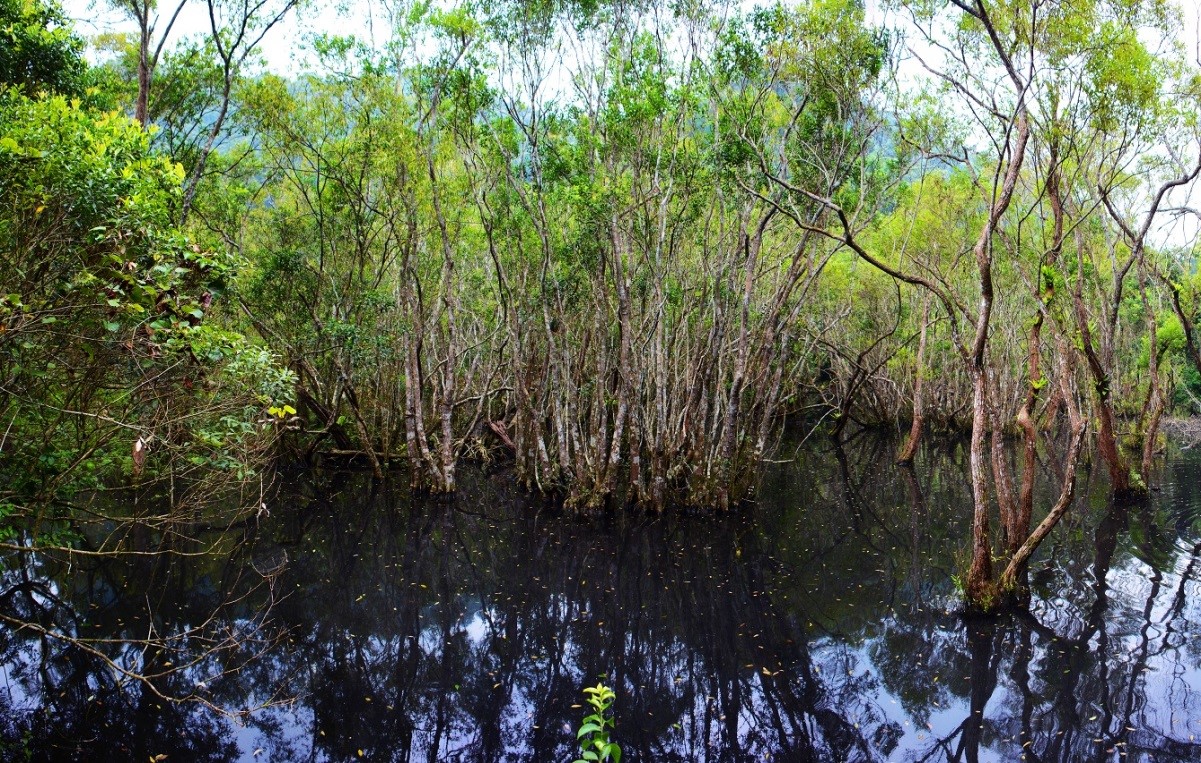 Also, in ​​Cat Ba National Park, a polje near the Viet Hai pier is largely covered with a freshwater swamp of mixed woody canopy. Along the trail, the vegetation popularizes particular fields of the reed named Phragmiteskarka (Poac.). Despite minor economic importance, every freshwater swamp bears different features, even some of them are completely pristine, some of them are a habitat for such an unusual species as Combretocarpus. These trees make a layer of intertwined, sub-horizontal branches 4 to 6 m above the forest floor, from which thick bundles of roots grow down to the floor which is extraordinary phenomenon in freshwater wetlands.

As well, about 119-138 marine lakes scattered around the area of Ha Long Bay - Cat Ba Archipelago are formed by sinkholes, karst funnels and enclosed valleys. Accounting for one third of the total in the world, these marine lakes store ancient and valuable species for conservation and scientific research, and act as a favorable environment for biological evolution. 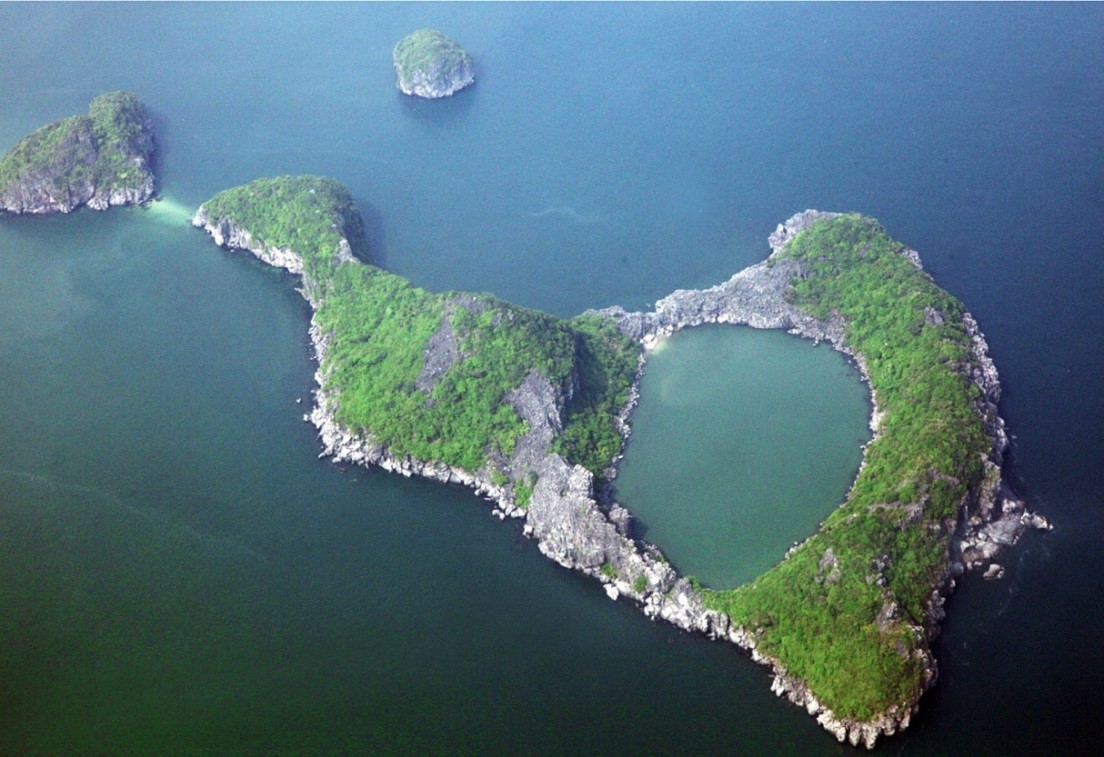 Ha Long Bay - Cat Ba Archipelago is also home to many endemic and rare animals such as Trachypithecus poliocephalus, Goniurosaurus catbaensis, Tiwaripotamon edostilus. Especially, Cat Ba golden-headed langur (Trachypithecus poliocephalus), a endemic species of outstanding universal value classified in the Red List, has only one population of about 60-70 individuals distributed only in Cat Ba and nowhere else in the world.

So far, socio-economic activities have been carried out responsibly in association with environmental protection, effectively preserving the inherent values of the property. Ha Long Bay - Cat Ba Archipelago, its exceptional values of aesthetics, geology, geomorphology and biodiversity, deserves to become a new world natural heritage site under 4 criteria (geology, aesthetics, species diversity, ecosystem diversity). This contributes towards honoring and protecting sustainably the outstanding values of the humanity for today and future generations.