The Fansipan cable car system carrying visitors to the highest mountain peak in Vietnam has proved to be a major contributor to the tourism industry in the resort town of Sa Pa over the past years. 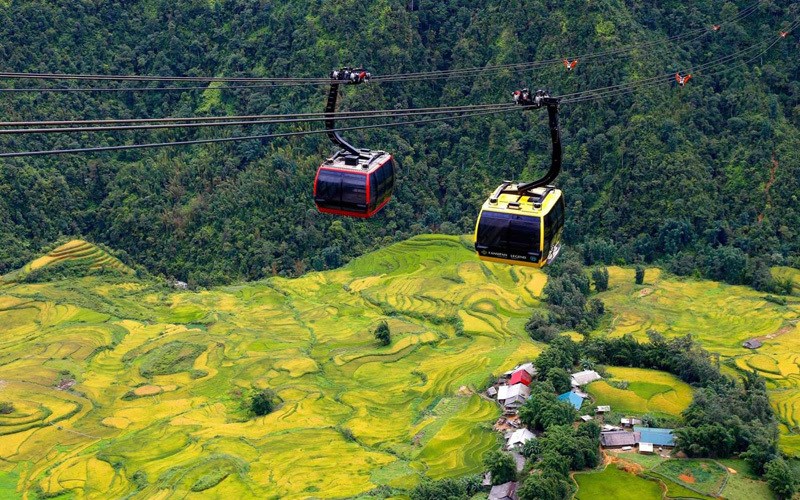 The cable car system will give tourists a breathtaking view of terraced rice fields on the way to Mount Fansipan.

Hanoi (VNA) – The Fansipan cable car system carrying visitors to the highest mountain peak in Vietnam has proved to be a major contributor to the tourism industry in the resort town of Sa Pa over the past years.

To attract development resources, authorities in the northern mountainous province of Lao Cai have invited major enterprises, including the Sun Group, to invest in Sa Pa.

After seven months of surveying and 800 days of construction, the Sun Group-invested cable car system to the peak of Mount Fansipan, 3,143 metres high and considered the “Roof of Indochina”, was officially unveiled in February 2016.

The cable car system is part of Sun World Fansipan Legend, a compound of cultural tourist attractions, cable car service, an amusement park, and hotels located at an altitude of 2,900 metres.

Once setting foot in this complex, visitors will be engulfed in an arts show named “Vu dieu tren may” (Dance in the clouds), which was recognised as Vietnam’s most unique arts show that reflects the northwestern region’s cultural identity.

The success of this arts show evidences that sustainably developing tourism on the basis of the core values and quintessence of traditional culture will help bring tourism in potential areas to a new height.

The tourism complex and its cable car system have continually secured major world awards and records, helping to attract a large number of travellers and generate direct benefits for local businesses like Sa Pa Green, she said.

Vuong Trinh Quoc, Chairman of the People’s Committee of Sa Pa town, said the Fansipan cable car system in particular and the Sun Group complex in general have made a substantial contribution to local tourism.

Since 2016, Sa Pa’s tourism has grown by 20 - 30 percent annually, and about seven of every 10 visitors use the Fansipan cable car service.

Quoc added the development of travel service companies has not only created jobs for local residents but also helped foster support services like transport, retail sale, accommodation, and food supply. Particularly, the reception of in-depth training and the chance to work in a professional environment have helped improve locals’ awareness and capacity of providing travel services, thereby giving a facelift to the local tourism industry./.