In 2014, SHP Corporation was granted an investment certificate for phase II of Trang Due Industrial Park project with a scale of 214ha. In 2016, with the support from parent company - Kinh Bac City Development Share Holding Corporation and the efforts of all employees of the company, SHP Corporation succeeded in negotiating and attracting two big projects of LG Group: LG Display project specializing in manufacturing high-tech OLED screens with an investment of 1.5 billion USD(now has increased to 3.25 billion USD) and camera module production project for mobiphone of LG Innotek which has an investment of 1.05 billion USD. From the pervasive influence of LG Group as well as the reputation of the infrastructure developer – SHP Corporation, the industrial park project phase II of Trang Due Industrial Park was quickly fulfilled 100% within 5 years with other large and small, domestic and foreign projects, especially projects from Korea in the field of electronics, components, and precision mechanics.

For large investors, deciding the location of investment depends on various factors and needs to tremendously undergo a thorough survey, research and evaluation process. To attract these “huge” projects, it is necessary to closely coordinate between infrastructure developer and related competent authorities. With long-standing reputation in the market of parent company - Kinh Bac Corporation - the leading industrial park developer in Vietnam, along with the support of local agencies, Trang Due Industrial Park has attracted a series of huge projects with high technology content, eco-friendly.

Up to now, the existing IP (401ha) has been completely fulfilled with 100% commercial land, 78 projects with a total investment capital of up to 7.1 billion USD. Construction unit cost in Trang Due Industrial Park is about US$23 million/ha - the highest construction unit cost among industrial parks in Hai Phong City, contributing to Hai Phong city to become the leading locality in the country in terms of FDI attractiveness in recent years. In addition, the remarkable point is the high level of satisfaction of investors with services provided by the IP when investing here.

The goal set by Hai Phong city, as well as the Government's requirement when deciding to establish Dinh Vu-Cat Hai Economic Zone, is to maximize the advantages of natural conditions and geographical location to become an investment attraction, receive domestic and foreign advanced techniques and technologies, positively affect to the process of building and developing infrastructure, create an industrial-urban-service zone, is an important basis to accelerate the process of industrialization and modernization of Hai Phong city in the spirit of Resolution 45 of the Politburo. Accordingly, enterprises investing in Dinh Vu - Cat Hai Economic Zone enjoy incentives compared to investing in other industrial parks such as incentives for CIT, import and export tax, VAT, etc.

In addition to the preferential tax policy for economic zones, an attractive point that attracts investors to Trang Due Industrial Park is the synchronous and modern infrastructure system, meeting the strict requirements of investors. The main internal road system is 32m wide (for 04 lanes) and byroad (23m) in the industrial park is planned to meet international standards, built with a large tonnage to ensure traffic connecting the industrial park with the infrastructure system outside the industrial park. Power system and 110/22KV substation with capacity of 2 (+1) x 63MVA ensure adequate and stable power supply for the entire industrial park. Clean water is provided from Trang Due and Vat Cach water plants with a total capacity of 25,000m3/day and a wastewater treatment system with a capacity of 8,000m3/day to ensure stable water supply and drainage for all enterprises in the industrial park. Besides, the landscape in the industrial park is always taken care of, regularly maintained to create a fresh and green, clean and beautiful environment. The security system in the Industrial Park is also paid great attention to provide a safe production environment for enterprises operating in the IP.

Positioned as a leading industrial park in attracting large projects, Trang Due Industrial Park always strives to maintain the reputation among investors in supporting services, ensuring sustainable development and constantly opening of projects in the industrial park. In order to welcome “the eagle”, Trang Due Industrial Park not only prepares the best locations with the best conditions, but also diversifies products to meet the needs of large investors as well as their satellites, suppliers and supporters to create a complete ecosystem in the IP and help large and small enterprises in mutual and sustainable development.

With outstanding advantages in infrastructure, tax incentives, geographical location, along with the companionship and close attention of competent authorities of Haiphong City as well as the leaders and employees of SHP Corporation, Trang Due Industrial Park extension phase will be an attractive destination for domestic and foreign investors in future.

Location of Trang Due Industrial Park: 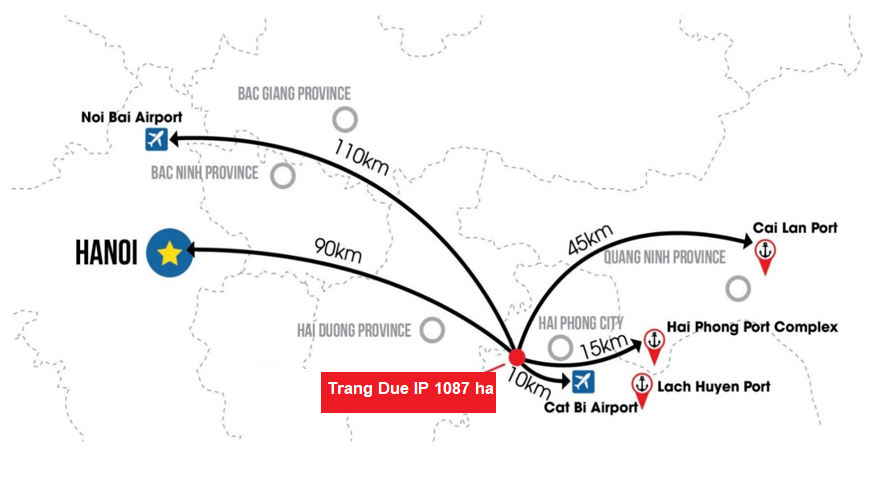 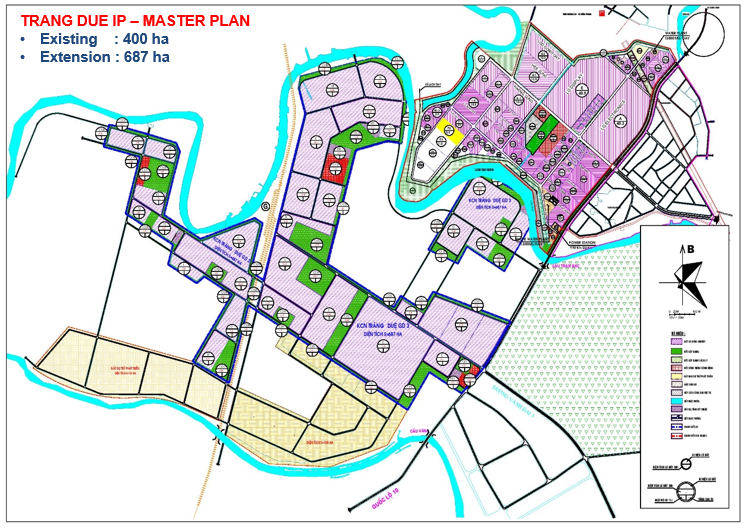 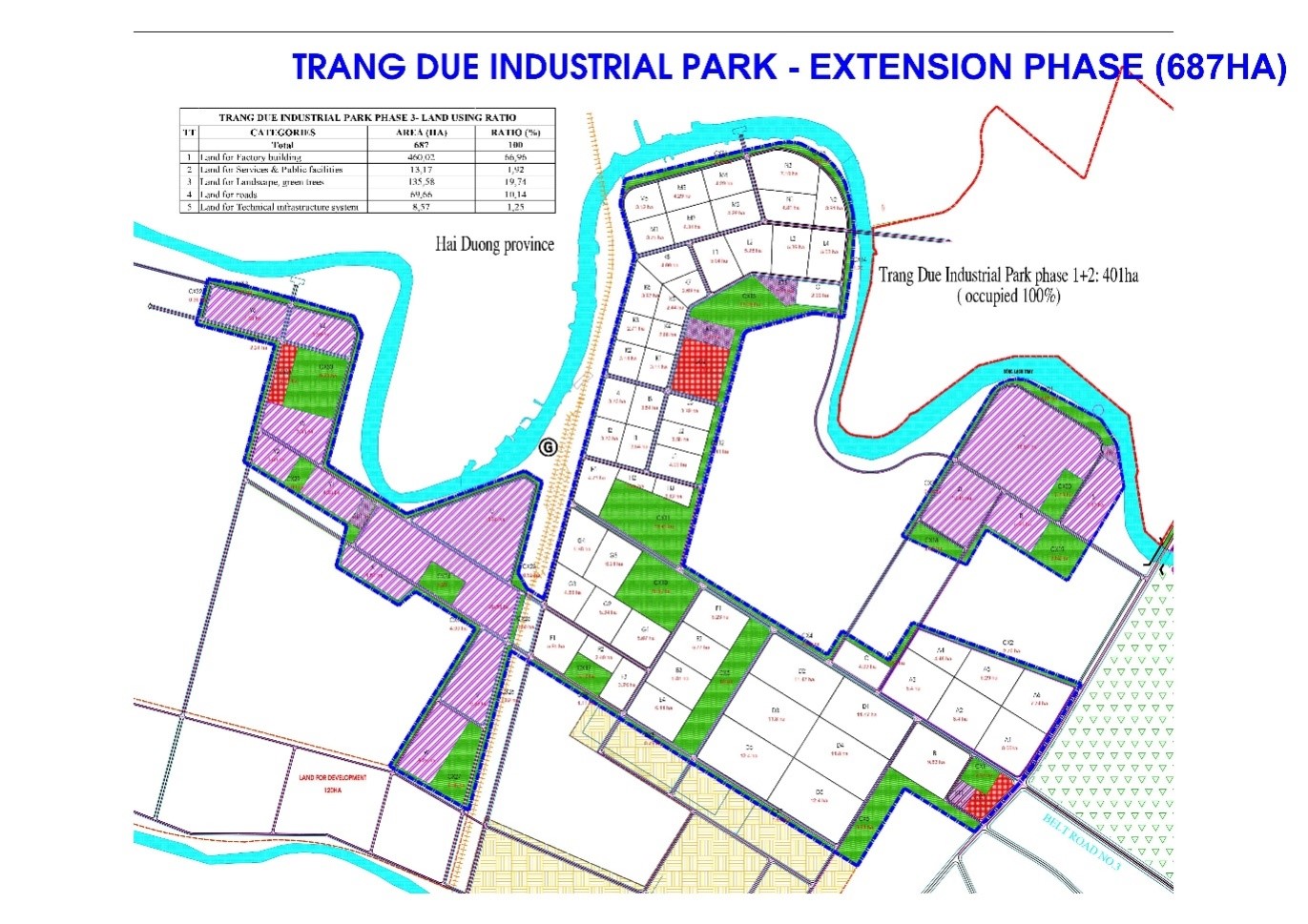 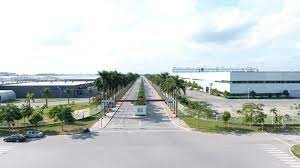 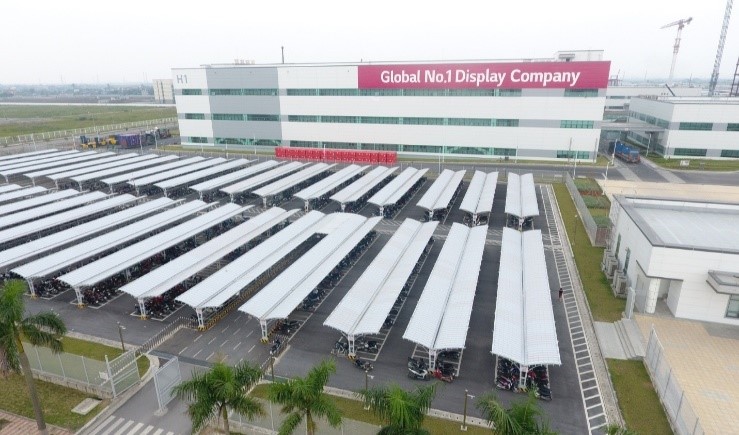 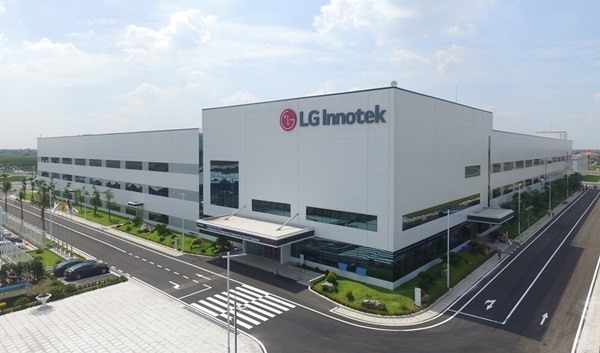 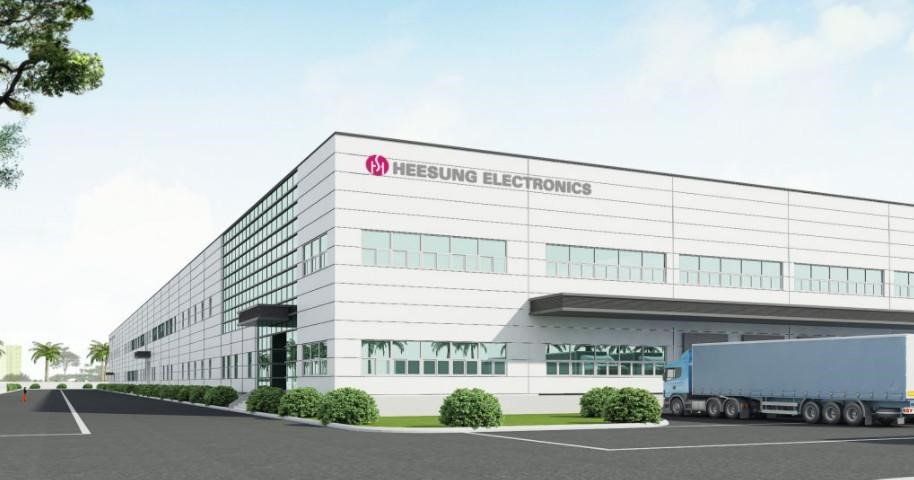 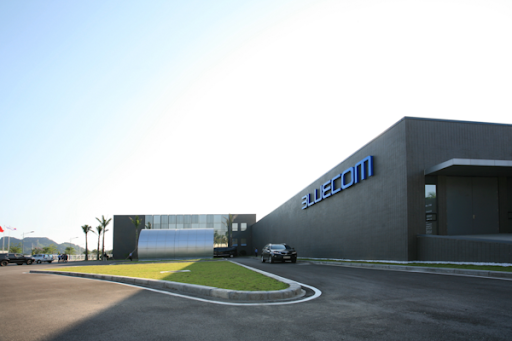