The project has a total cost of over 6.400 billion VND with investment in constructing 2 container terminals (each one is 375 metres long) to accomodate 100.000 DWT vessels (equivalent to 8.000 TEU). 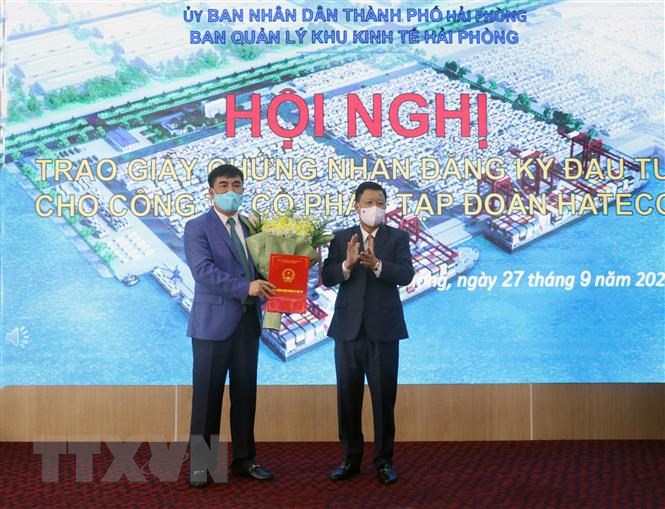 On September 27, the Management Board of Hai Phong Economic Zones (HEZA) handed over an investment certificate for the construction project of Terminal No. 5 and No. 6 in Lach Huyen port to HATECO Group Joint Stock Company based at No.1 Huynh Tan Phat, Sai Dong B Industrial Park, Thach Ban Ward, Long Bien District, Hanoi City.

This project was approved by Prime Minister at Decision No. 299/QD-TTg dated March 4, 2021, after which HEZA granted investment registration certificate on September 24, 2021.

After being granted the investment registration certificate, the investor would carry out the procedures related to land, planning and construction which was expected to start in December 2021.

The project coming into operation will be able to accomodate container vessels up to 100,000 DWT/8,000 TEU with cargo throughput of about 25 million tons/year and about 600 workers.

Mr. Hoang Dinh Tuan, General Director of HATECO Group Joint Stock Company, said that the Group considered this as the key project and would mobilize all resources to complete regulated procedures, enabling the construction to start soon at the end of this year and put the project into operation on schedule assigned by the Prime Minister.

Mr. Le Trung Kien, Head of HEZA expressed that HEZA would cooperate with relevant agencies to create the best conditions for the investor to quickly implement the project on schedule

As the northern sea traffic hub, the gateway to the sea of the northern provinces, terminal No.5 and No.6 together with terminal No.1 and No.2 put into operation since 2018 as well as terminal No.3 and No.4 constructed since May 2021 would extend Lach Huyen port area to directly serve Xuan Cau industrial park and non-tariff zone of which investment was approved by the Prime Minister at Decision No. 535/QD-TTg dated April 1, 2021.

Besides, the construction of terminals No.5 and No. 6 would contribute to the development of Lach Huyen port into an international gateway port, meeting the increasing demands of the market, and directly shipping the Northern region's exports to the European and American markets.