Groundbreaking ceremony for the construction project of a shopping mall, entertainment center, 05-star hotel, and offices for rent in the Iron Market area

(Haiphong.gov.vn) –On the morning of May 14, the City People’s Committee solemnly organized a groundbreaking ceremony for the construction project of a shopping mall, entertainment center, 05-star hotel, and offices for rent in order to embellish the Iron Market area administratively located in Phan Boi Chau ward of Hong Bang district. That is one of the key construction projects of Hai Phong in the year of 2022, once completed, the project will make a great contribution to Hai Phong City in realization of its target of becoming a big hub of commercial, tourist, and service activities of the whole country. 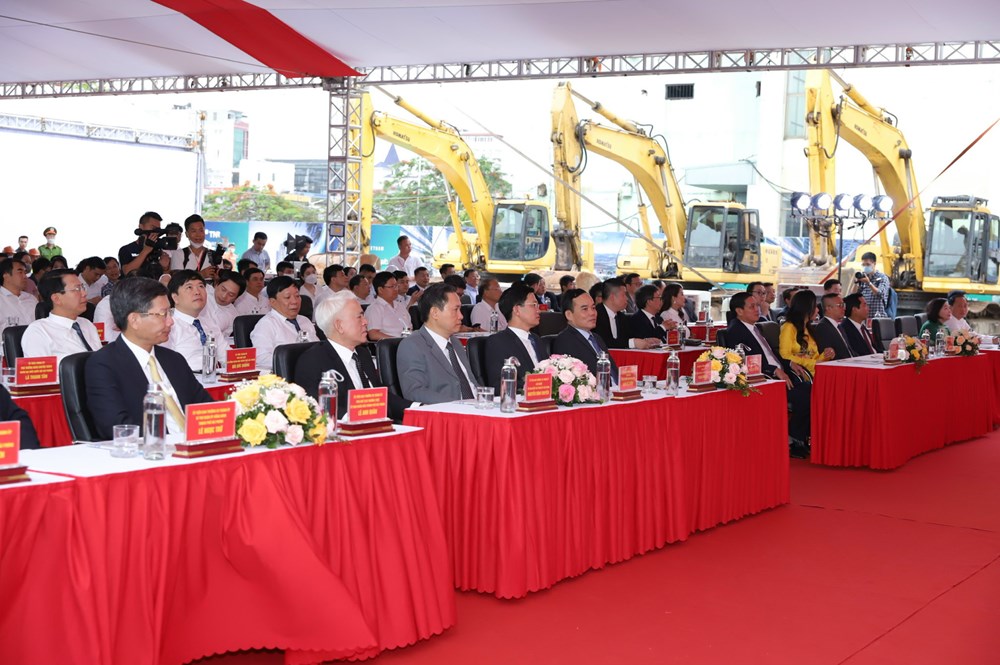 Delegates were attending to the ground breaking ceremony. 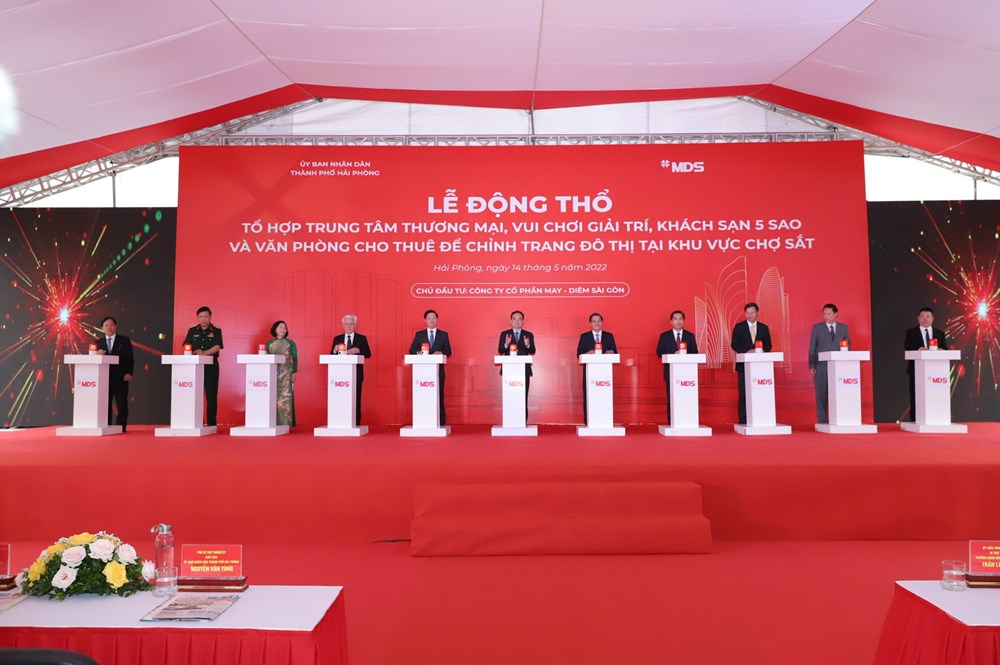 The city’s leaders were clicking on button for ground breaking project.

The Complex of commercial and entertainment centers, 5-star hotel, and for-rent offices for embellishment of the Iron Market area administratively located in Phan Boi Chau ward of Hong Bang district, invested by Sai Gon Textile – Matches Joint Stock Company. Within a construction scale of 40 floors and 02 basements in a land area of 15,187.2 square meters. Podium building density is 46.05%; tower block building density is 40%; the building height scaled from the ground to roof deck is 146 m, etc. 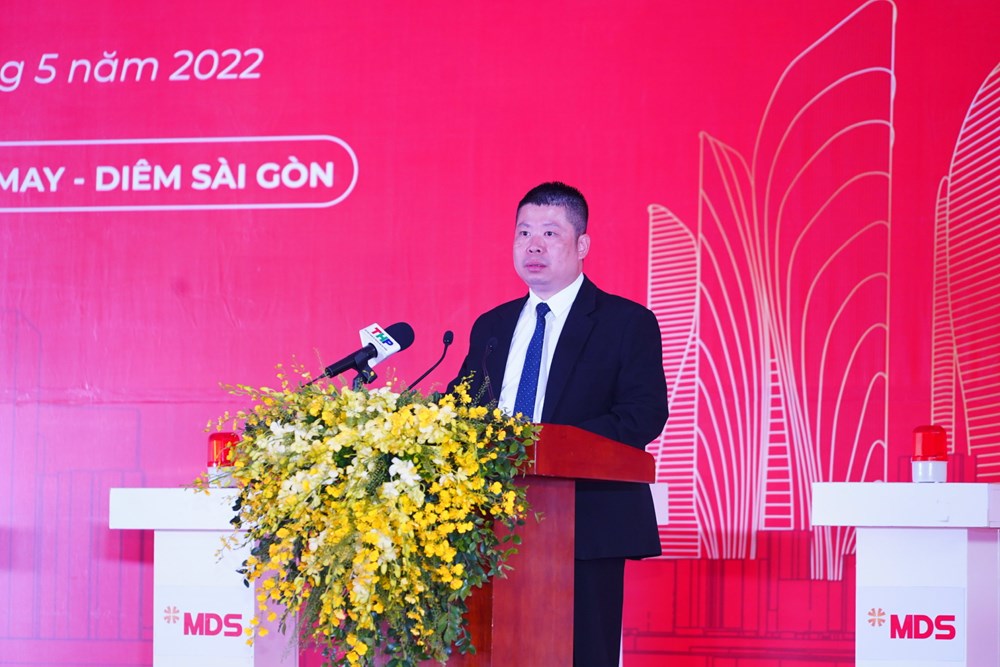 Owning a unique and modern design, the complex will have promised being crowded, delightful, and equal to central shopping malls fulfilled functions in the region that meets demands of amusement, shopping, offices for rent, and accommodation for tourists, experts, and businessmen when coming to Hai Phong for investment and cooperation.

The investment in the construction of the shopping mall, amusement, 05-star hotel, and for-rent offices complex will contribute to embellishing and synchronizing the appearance of Hai Phong urban area in terms of technical infrastructure, creating an urban landscape in accordance with the Hai Phong urban development master plan by 2030 and vision to year 2050. 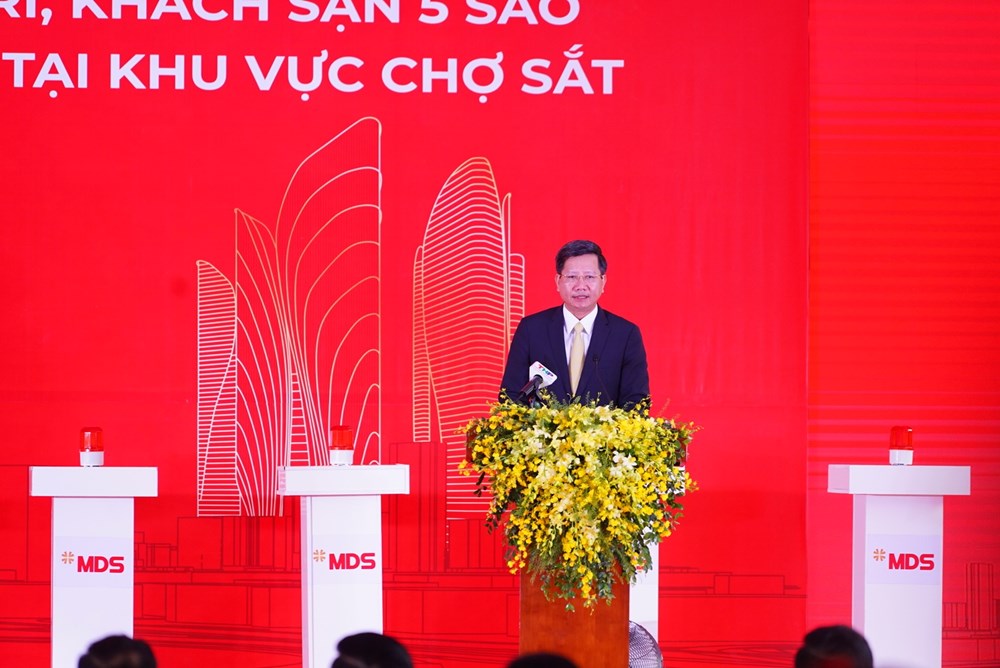 Gave a speech at the groundbreaking ceremony, Standing Vice Chairman of Hai Phong People’s Committee Le Anh Quan mentioned the name Iron Market was born in the fact that the place used to be built with iron and steel materials in the 19th century and that it was known as “big market”. That place convers rivers that is convenient for goods transportation by boats and ships to other economic centers in Vietnam and other countries; the Iron Market therefore used to be vivid and crowded in comparison with Dong Xuan and Ben Thanh markets.

By subsidy period, the Iron Market had been a prosperous commercial place, one of the biggest trade centers in the Northern of Vietnam, businessmen at the Iron Market were rich and successful. Hence, the Iron Market became a pride of the port city’s residentials. After the incident in 1985 where the market got fired, with opening and innovation across the country, Hai Phong City got a venture with foreign investors to rebuild the Iron Market for further use in 1994.

After many years of operation, the Iron Market was deteriorated, hence, to embellish and create a new appearance for that area, the city organized bidding for investors selection and construction of a new and modern trade center.

The Standing Vice Chairman underlined that the project of shopping mall, amusement, 05-star hotel, and for-rent offices complex got invested more than 6,000 billion VND, having a scale of 02 buildings in 40-floor height, with an architecture idea of “converging rivers”, the works will be one of outstanding spots regarding architecture, contributing to build up a modern and civilized Hai Phong City, step-by-step lifting up Hai Phong to become “a city equal with cities in the region and in the world”.

The Standing Vice Chairman requested the investor and contractors to gather material and labor sources for the works construction, ensuring completion earlier than set schedule, technically and aesthetically, absolutely safe for labors. Striving to complete and inaugurate the project by the end of 2024. From the city, leadership has committed to create all favorable conditions for optimal support to investor and contractors during the work’s construction. Particularly, the Standing Vice Chairman sent greetings and gratitude to the organization and more than 450 business households for their agreement and support to the city’s common undertaking, then a soon ground handover to the investor for the project implementation.