An outstanding breakthrough in FDI attraction 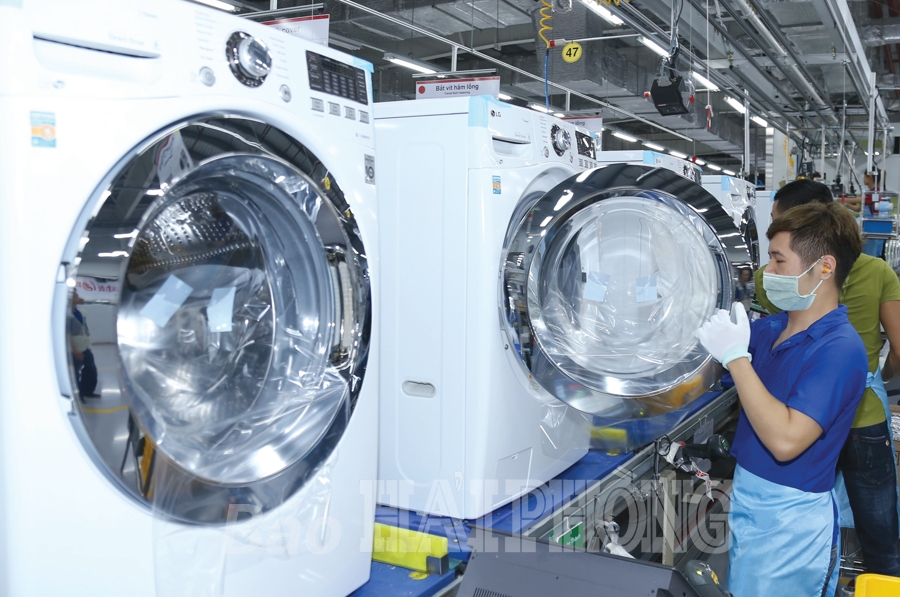 HaiPhong continues to be an attractive destination of strong investment waves.

In the photo: Workers of LG Electronics Company on production lines.

(HPDT)- At the awarding ceremony of the adjusted investment registration certificate of LG Display (LGD) at the end of August 2021, Mr. Suk Myung Su, General Director of LGD expressed his great happiness and strong impression when the project received special attention from Secretary of HaiPhong City Party Committee Mr. Tran LuuQuang; Chairman of the City People's Committee Mr. Nguyen Van Tung; Standing Committee of the City Party Committee; HaiPhong Economic Zone Authority and relevant sectors. Therefore, the adjusted project with investment capital of 1.4 billion USD was completed procedures and granted an investment certificate in just 3 days. This is a remarkable reform in administrative procedures, creating maximum conditions for businesses, so that HaiPhong continues to have an outstanding breakthrough of investment attraction.

The attraction of HaiPhong

Mr. Suk Myung Su, on behalf of major investors, expressed his feelings about the business investment environment in HaiPhong. Only 03 days to complete procedures for granting the adjusted investment registration certificate with capital of 1.4 billion USD is an unprecedented record, the best proof of innovative thinking, strong and effective reform of HaiPhong Economic Zone Authority and relevant sectors, levels. Previously, in February 2021, LGD's first capital increase of 750 million USD was also completed quickly and urgently in only 05 days. Therefore, in 2021, LGD emerged as a "phenomenon" in terms of investment attraction of HaiPhong with 02 "huge" capital increases.

Not only LGD, but also many large domestic and foreign investors have expressed their desire to invest in HaiPhong after conducting surveys and researches. That is the result of renewing the thinking process and perseverance of the whole political system in implementing administrative reform, especially administrative procedures, and improving the business investment environment. Most of investors coming to HaiPhong are now satisfied because of innovation in working style, taking efficiency as a measure of all authority levels. The site clearance work has made great progress, and directed closely, drastically for urgent implementation, many projects are assigned construction sites in the shortest time. More importantly, HaiPhong has abundant human resources, ability to learn new things, fast modernity to meet investor requirements. Along with that, HaiPhong is one of the localities doing well in effective prevention and control of COVID-19; basically, the safe city shows that HaiPhong converges all favorable conditions to attract investment capital.

The attraction of HaiPhong is also reflected in the city’s position and potential. Resolution No.45-NQ/TW of the Politburo identified HaiPhong as the driving force for development of whole region and whole country. When studying and promulgating specific policies and mechanisms for HaiPhong's development, the Central Government always has a consistent viewpoint: HaiPhong’s development is not only for HaiPhong but also for the whole country. This is the biggest attraction motivating investors from all over to HaiPhong. Together with that, with the city's great efforts and determination, the support and assistance from the Central Government, up to now, HaiPhong is proud of having a synchronous, modern and connecting infrastructure system. HaiPhong International Gateway Port, Cat Bi International Airport, extensive highway system, convenient waterway system with the strong vitality of HaiPhong urban areas being evaluated as the most dynamic area in Vietnam has created an irresistible attraction. Investors pay more attention to HaiPhong's transport infrastructure connecting to QuangNinh, northern coastal provinces, creating a solid connection and an extremely favorable environment. Thus, the attraction of HaiPhong extended beyond the city area and towards the region.

Not only FDI capital, but also domestic investment capital is increasing significantly. Notably, Hateco Group Joint Stock Company invested 6,425 billion VND to implement an investment project on building Terminal No.5 and Terminal No.6 of HaiPhong International Gateway Port. In addition, HaiPhong Port Joint Stock Company also invested nearly 7,000 billion VND to build 02 container terminals No. 3 and No. 4 at HaiPhong International Gateway Port. At the end of 2021, XuanCau Holding decided to invest 11,000 billion VND to build LachHuyen Non-Tariff-Logistics and Industrial Park with a total area of 752 hectares. As expected, the project will start construction in early 2022, complete phase 1 in 2025, phase 2 in 2030 and phase 3 in 2033. When put into operation, the project will attract 40,000-50,000 workers.

Moreover, many large domestic enterprises have conducted surveys and set up investment, their projects will be carried out in 2022 with total capital of up to tens of trillions VND. Typically, the investment project on building Sat Market Trade Center; projects on building new civilized and modern urban areas in Duong Kinh, Do Son and KienThuy Districts...

The reputation is spreading, the image is getting better and better, HaiPhong is becoming a land of great potential. In the last days of 2021, there are many domestic and foreign organizations, businesses and investors continuously wishing to cooperate and invest in HaiPhong, including projects with investment capital of up to 5 - 10 billion USD. And even, the city’s enterprises have plans to expand and increase investment in their own homeland. These signals showed that HaiPhong will continue to be an attractive destination of stronger investment waves in 2022 and the coming years.