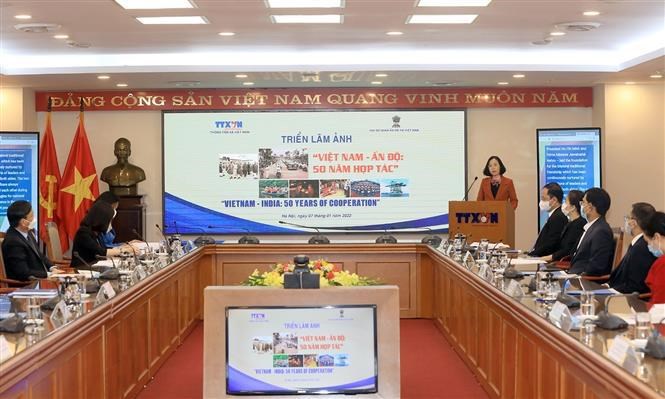 Hanoi (VNA) – A virtual photo exhibition entitled ‘Vietnam - India: 50 years of cooperation’ began on January 7. The event is in celebration of the 50th founding anniversary of the Vietnam - India diplomatic ties (January 7, 1972 - 2022) and five years since the establishment of the two countries' Comprehensive Strategic Partnership (September 2016 - 2021). Held by the Vietnam News Agency (VNA) together with the Embassy of India in Vietnam and the Vietnam - India Friendship Association, the exhibition can be viewed at https://link.gov.vn/TLAVNAD (in Vietnamese) and https://link.gov.vn/PICVNAD (in English) until January 11. In her opening remarks, VNA General Director Vu Viet Trang emphasised that amid complex developments of the COVID-19 pandemic, it is hard for many activities to take place on a large scale.

"The VNA and the co-organisers wish to highlight the historic landmarks in the traditional and long-standing friendship between the two countries, as well as the profound sentiment and sharing that the countries’ peoples have given to each other over the last five decades," she added.

Vietnam and India boast a long-standing friendship. The foundation of their friendship was set up by the two preeminent leaders - President Ho Chi Minh and Prime Minister Jawaharlal Nehru. Through ups and downs in history, the sound traditional friendship between Vietnam and India has always been nurtured, consolidated, and developed to a new level by generations of the two countries’ leaders and people in the interests of both sides, and it has been developing well across all fields. 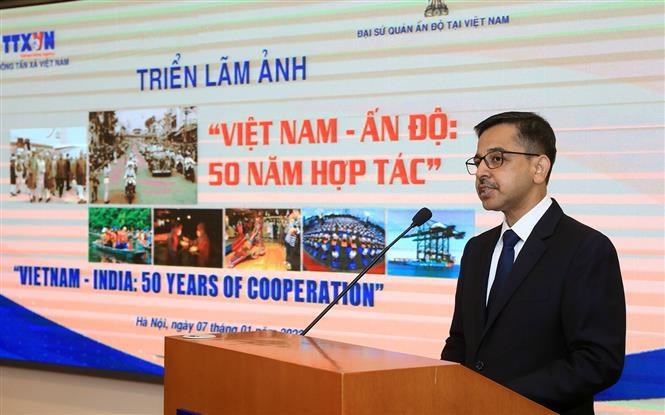 For his part, Indian Ambassador to Vietnam Pranay Verma thanked the VNA for sharing some rare pictures from its archives to commemorate the 50th founding anniversary of diplomatic ties.

He said the photo exhibition offers a glimpse of some precious historical moments in the India-Vietnam relations and captures the depth of the bilateral ties and close friendship. The common values and interests, along with the deep mutual trust and understanding, have turned Vietnam into an important partner of India in terms of bilateral, regional, and global cooperation, the diplomat continued.

He expressed his belief that the close friendship between the two peoples will become increasingly strong and the Vietnam - India relations will reach new levels.

The display features 50 black-and-white and colour archive photos which truthfully and vividly reflect the increasingly strong solidarity, friendship, and cooperation between the peoples of Vietnam and India.

The photos by the VNA introduce to the public touching moments of bilateral ties, from President Ho Chi Minh’s warm reception for Prime Minister Jawaharlal Nehru during the latter’s visit to Vietnam (on October 17, 1954) to the presence of both President Prasat and Prime Minister Jawaharlal Nehru at New Delhi airport to welcome President Ho Chi Minh, the warm welcome by New Delhi people for the Vietnamese leader during his India visit in February 1958, along with an image of Hanoians lining the street to welcome Indian President Prasat to Vietnam on March 22, 1959.

Visitors can get a look at important milestones in the two countries’ relations, including the signing ceremony of the Joint Declaration on the Framework of Comprehensive Cooperation between Vietnam and India as they enter the 21st Century; the elevation of bilateral ties to a Strategic Partnership and then to a Comprehensive Strategic Partnership; Indian President Ram Nath Kovind’s attendance in the sixth session of the 14th National Assembly of Vietnam; as well as activities in economic and defence cooperation, people-to-people diplomacy, and mutual support and assistance in the combat against the COVID-19 pandemic./.