The new Argentinian Ambassador to Vietnam, Luis Pablo Maria Beltramino, has affirmed his country’s willingness to upgrade its relations with Vietnam to a strategic partnership, especially when the two sides are preparing to mark the 50th founding anniversary of their diplomatic ties in 2023. 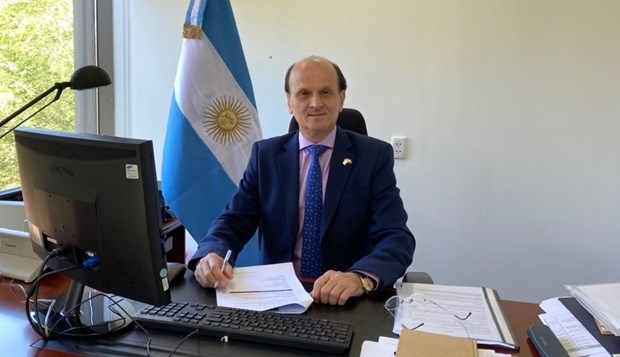 Argentinian Ambassador to Vietnam Luis Pablo Maria Beltramino (Photo courtesy of the Argentinian Embassy)
Hanoi (VNA) – The new Argentinian Ambassador to Vietnam, Luis Pablo Maria Beltramino, has affirmed his country’s willingness to upgrade its relations with Vietnam to a strategic partnership, especially when the two sides are preparing to mark the 50th founding anniversary of their diplomatic ties in 2023. Talking to the Vietnam News Agency after presenting his credentials to President Nguyen Xuan Phuc, Beltramino expressed his honour to be appointed Ambassador of Argentina to Vietnam and pledged all-out efforts to continue promoting the solidarity, friendship, and cooperation between the two countries, which set up their comprehensive partnership in 2010. Valuing the flourishing extensive cooperation, he highlighted its three pillars of political dialogue, trade, and technical collaboration. The ambassador noted the political dialogue mechanism has been deployed in the form of all-level mutual visits, especially those at high levels. Meanwhile, he went on, the two economies are complementary to each other, and Argentina is ready to diversify products to meet Vietnam’s demand. On the other hand, the Southeast Asian nation also boasts a number of high-quality products like technology, textile-garment, and footwear, which are all popular in his country. The seventh meeting of the inter-governmental committee on economic-trade and scientific-technological cooperation will take place in August to discuss trade opening, Beltramino announced. 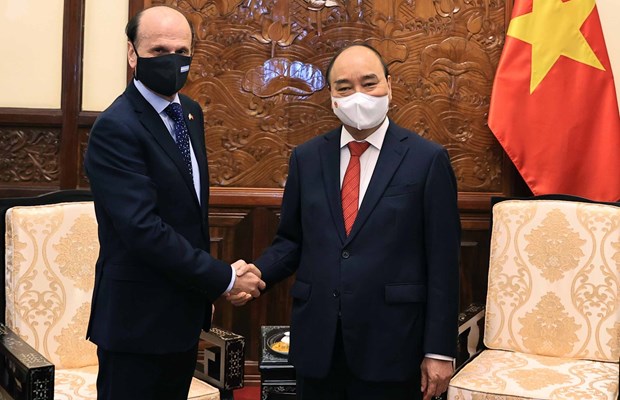 Argentinian Ambassador Luis Pablo Maria Beltramino (L) meets with President Nguyen Xuan Phuc after presenting his credentials (Photo: VNA)
He applauded the effectiveness of bilateral technical cooperation over the last two decades, noting the implementation of 15 joint projects in various fields, including industry and agriculture, which are the strengths of both Argentina and Vietnam. The diplomat also talked about bilateral collaboration in forensic anthropology, in which the South American nation has been helping Vietnam to identify war martyrs. Expressing his delight at the growth of the comprehensive partnership through multiple signed agreements, the ambassador highlighted potential fields for future cooperation, such as high tech and satellite services for peace purposes, for examples, supporting the study of soils, meteorology and agricultural production efficiency, of which Argentina holds competitive advantages. Beltramino also highly spoke of the two countries’ mutual support for each other and exchanges of views in addressing the world’s emerging challenges, namely climate change, human assistance, peacekeeping, observation of UN Charter and COVID-19 response. He expected Argentina and Vietnam will strengthen ties to together tackle these challenges for the benefits of the two peoples. He took the occasion to congratulate Vietnam's national football team on advancing to the third round of World Cup qualification for the first time. He proposed the two countries to cooperate in training players, saying promoting relations between their football federations and football clubs is a good idea, which will not only boost the development of the sport in Vietnam but also contribute to tightening the bilateral ties. Argentina, on the other hand, is very interested in developing badminton, a very popular sport in Vietnam, he said. Argentina was one of three Latin American countries, together with Cuba and Chile, to establish diplomatic relations with Vietnam before 1975. The bilateral diplomatic ties were set up on October 25, 1973. Argentina is now Vietnam’s third largest trade partner in Latin America, after Brazil and Mexico, with two-way trade reaching 3.95 billion USD in 2020, an increase of 4.3 percent from the previous year. According to the Vietnamese Ministry of Industry and Trade, the bilateral trade totalled 440 million USD in the first two months of this year, of which Vietnam’s exports to Argentina hit 174 million USD, up 164.52 percent year-on-year./.
VNA
https://en.vietnamplus.vn/argentina-hopes-for-strategic-partnership-with-vietnam-ambassador/203340.vnp
VietnamPlus, Vietnam News Agency (VNA) - Vietnamplus.vn