Indonesian President Joko Widodo warmly welcomed and highly evaluated the important significance of the visit to Indonesia by Vietnamese counterpart Nguyen Xuan Phuc ahead of the 10th anniversary of bilateral strategic partnership next year, during their talks in Jakarta on December 22. 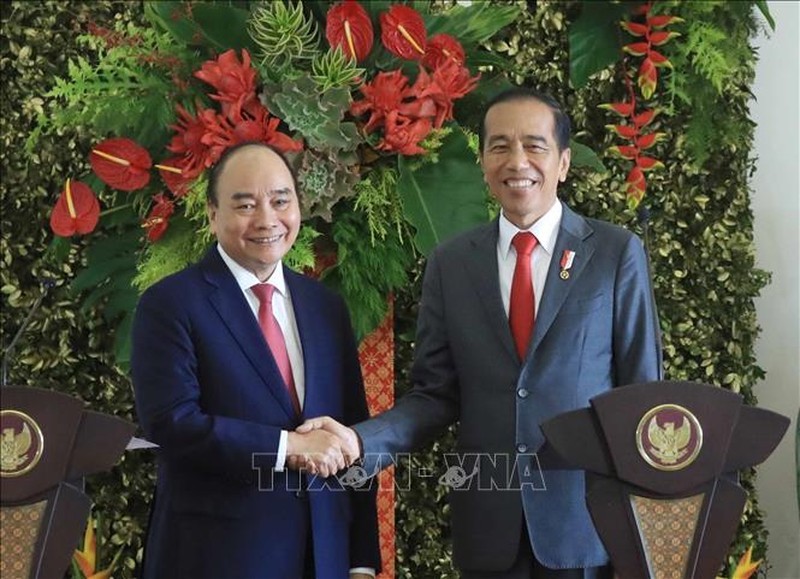 President Widodo said the visit will create new impetus for the extensive and practical development of the bilateral ties. Congratulating Vietnam on its achievements in controlling the COVID-19 pandemic, maintaining economic growth and ensuring social security, he affirmed that Vietnam is a partner of strategic importance of Indonesia in the region.

President Phuc, for his part, congratulated Indonesia on its post-pandemic recovery and development, fulfillment of its role as Chair of G20 in 2022 and a higher stature on the international arena.

Vietnam always treasures its strategic partnership with Indonesia, he stressed, wishing that the two countries would realise their goals of becoming developed nations by 2045 on the occasion of their 100th founding anniversaries.

On this occasion, President Phuc invited President Widodo to visit Vietnam at a appropriate time.

Both leaders expressed their delight at the rapid and effective development of the bilateral strategic partnership in all key spheres, from politics, security, defence, to economy, trade, investment, tourism, transportation, education-training and culture. In particular, two-way trade in the first 11 months of this year reached a all-time high of nearly 13 billion USD.

They pledged to continue facilitating all-level visits and exchanges and effectively implement cooperation mechanisms, especially the Joint Commission for Bilateral Cooperation and Joint Commission for Economic, Scientific, and Technical Cooperation, as well as signed cooperation agreements, especially the 2019-2023 action plan to realise the bilateral strategic partnership, towards building the 2024-2028 action plan and lifting two-way trade to 15 billion USD before 2028 in a more balanced manner.

Both sides affirmed their determination to step up investment ties to be on par with their potential and strategic partnership bby creating favourable conditions for enterprises to diversity investments, including in new fields such as digital economy and transformation, green economy and renewable energy.

President Widodo said that more and more Indonesian businesses are interested in investing in Vietnam and hoped that more Vietnamese enterprises will expand their operations in Indonesia.

The two leaders also agreed to enhance cooperation in other important fields such as national defence-security, including jointly dealing with common security challenges at sea, fighting transnational crimes, ensuring energy and food security while tightening bonds in education-training, tourism, increasing the frequency of direct commercial flights as well as people-to-people and locality-to-locality exchanges.

The two countries will increase consultations and work closely together at region and global forums, and uphold ASEAN’s solidarity and central role, they said.

The Vietnamese side affirmed support for Indonesia’s role as ASEAN Chair in 2023. Meanwhile, Indonesia also agreed to back Vietnam’s efforts to fulfill its role as a member of the United Nations Human Rights Council for the 2023-2025 tenure.

Reaffirming the importance of peace, stability, safety, security and freedom of navigation and aviation in the East Sea/South China Sea, they pledged to maintain ASEAN’s solidarity and common stance on the East Sea issue; promote the implementation of the Declaration on the Conduct of Parties in the East Sea (DOC) and work closely together in the negotiations on an effective and efficient Code of Conduct in the East Sea (COC) in accordance with international law and the 1982 UN Convention on the Law of the Sea (UNCLOS).

Concluding the talks, the two leaders witnessed the signing and exchange of cooperation agreements, including a Memorandum of Understanding (MoU) on cooperation in terrorism prevention and combat, a MoU on cooperation in fighting the illegal trafficking and transportation of narcotic drugs, psychotropic substances and precursors, and another on cooperation in energy and mineral resources.

Later, the two Presidents met with the press to inform about the results of their talks, including the completion of negotiations on the delimitation of the exclusive economic zone in accordance with international law and the 1982 UNCLOS

Earlier the same day, President Phuc and the Vietnamese delegation laid wreaths at a monument dedicated to Indonesian national heroes in Kalibata Heroes Cemetery where 7,000 fallen combatants, national heroes, leaders and well-known persons of Indonesia are resting in peace.