Permanent member of the Secretariat of the Communist Party of Vietnam (CPV) Central Committee Vo Van Thuong and the Party high-ranking delegation had a number of meetings with the Republic of Korea (RoK) officials on August 2-3 before concluding their visit to the RoK. 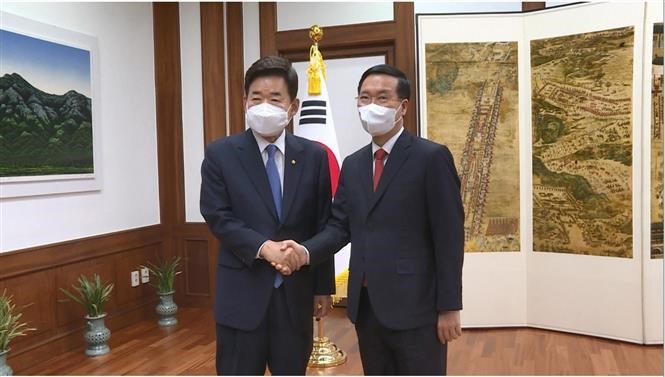 Permanent member of the Secretariat of the Communist Party of Vietnam (CPV) Central Committee Vo Van Thuong (R) and Speaker of the RoK's National Assembly Kim Jin-pyo (Photo: VNA)
Permanent member of the Secretariat of the Communist Party of Vietnam (CPV) Central Committee Vo Van Thuong and the Party high-ranking delegation had a number of meetings with the Republic of Korea (RoK) officials on August 2-3 before concluding their visit to the RoK.
They included a meeting with Speaker of the RoK's National Assembly Kim Jin-pyo, leaders of the ruling People Power Party, the head of the Senior Advisory Board of the President, the Minister of Employment and Labour, the SMEs and Startups Agency, and a number of RoK organisations such as the RoK-Vietnam Friendship Association, the Korea-Vietnam Friendship Parliamentarians’ Group, Korea-Vietnam Economic and Cultural Exchange Association (KOVECA), Association of Korean People Loving Vietnam (VESAMO).
The delegation also visited the Space Technology Centre of SK Group and Samsung Town.
At the meetings, Thuong informed the hosts on the development orientations, external policies and major issues discussed in the 13th National Party Congress of Vietnam, as well as achievements of Vietnam in various fields, the leading role of the Communist Party of Vietnam (CPV) and the Party’s relations with political parties and partners in the world.
He affirmed the policy to strengthen relations with the RoK as stated by Party General Secretary Nguyen Phu Trong during the telephone talks with President Yoon Suk-yeol.
Vietnam always create optimal conditions for investors and businesses from the RoK, he said.
Thuong proposed that Speaker Kim Jin-pyo support the strengthening of bilateral political relations through the exchange of delegations at all levels, and the fostering of economic, trade and investment collaboration, bringing labour cooperation as a major cooperation area, along with partnership in health care and vaccine. The National Assemblies of the RoK and Vietnam should work together to realise agreements reached during the RoK visit by Vietnamese National Assembly Chairman Vuong Dinh Hue in December 2021.
He also gave a number of proposals to Korean organisations and businesses on the orientations to further beef up cooperation between the two countries in all fields.
He suggested that the RoK continue to support the stance of ASEAN and Vietnam on promoting peace and cooperation in the East Sea, and the implementation of the Declaration on the Conduct of Parties in the East Sea (DOC), and soon reaching a Code of Conduct in the East Sea (COC), as well as the strict implementation of the 1982 UN Convention on the Law of the Sea (UNCLOS).
The top Korean legislator and Korean partners underlined that partnership with Vietnam is a model of the RoK's relations with other countries. They agreed with and gave active discussions on issues raised by Vietnam.
Kim Jin-pyo highlighted the growing ties between the two countries, and expressed belief in the great potential of the long-term and sustainable relationship between the two countries.
Head of the Senior Advisory Board of the President underlined the RoK President’s great attention to Vietnam in all fields. The RoK side agreed with Vietnam on the significance of maintaining peace, security and maritime and aviation freedom in line with the 1982 UNCLOS, and supported related viewpoints of ASEAN and Vietnam.
Meanwhile, representatives of the PPP said that a delegation of the party will visit Vietnam soon to seek ways to strengthen the relationship between the two parties, creating momentum for the growth of bilateral ties in the time to come./.
en.vietnamplus.vn