The Vietnamese Goods Week 2022 is taking place at over 350 supermarkets and stores run by retail giant AEON across Japan and on its website until June 3. 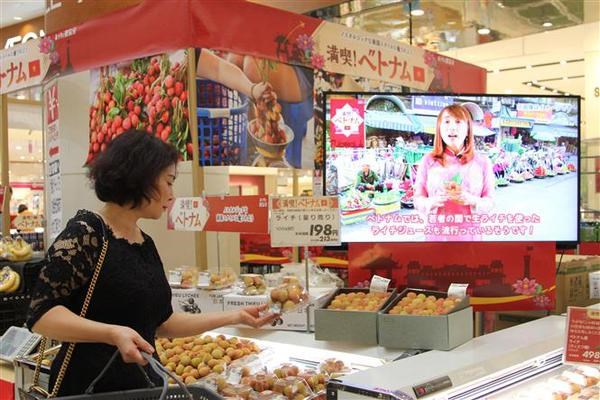 A Vietnamese selects lychee at a AEON's supermarket in Japan. (Photo: VNA)

Tokyo (VNA) – The Vietnamese Goods Week 2022 is taking place at over 350 supermarkets and stores run by retail giant AEON across Japan and on its website until June 3.

The three-day event, jointly organised by AEON Group, the Ministry of Industry and Trade and the Japanese Embassy in Vietnam, aims to raise the value of Vietnam's exports through the Japanese retailer’s system to 1 billion USD by 2025.

The products on display include fresh fruits such as lychee and banana, processed food, garments-textiles, leather and footwear, household utensils, and handicrafts.

One of the highlights of the event is a souvenir fair held for the first time to introduce Vietnamese products such as knitwear, embroidery and bags. In addition, AEON has also introduced a number of new products branded Topvalu but made in Vietnam such as frozen mango, cashew nuts and mixed nuts.

Soichi Okazaki - Executive Officer, ASEAN Business of AEON, said this year, they imported up to 22 tonnes of lychee from Vietnam for sale at the AEON supermarket chain across Japan, as compared to only 5 tonnes last year.

Vietnamese lychee is very fragrant, looks fresher and tastes better this year, he added, attributing it to improved preservation and sterilisation techniques. He also said that Vietnam's banana has also attracted the attention of Japanese consumers. 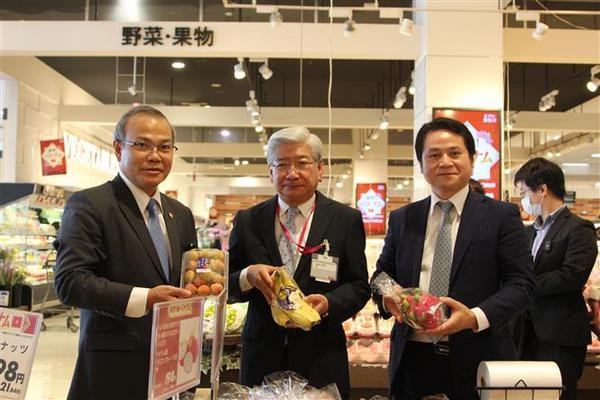 During a working session with Okazaki on July 1, Vietnamese Ambassador to Japan Vu Hong Nam appreciated AEON's contributions to trade relations between the two countries.

The ambassador emphasised that AEON does not only help bring Vietnamese agricultural products and other goods to the Japanese market, but also contributes to developing a high quality production system in Vietnam, thereby increasing the incomes of local farmers and other producers.

For his part, Okazaki said that AEON currently has about 170 business establishments in Vietnam, including six trade centres. It is constructing other facilities in Hoang Mai district (Hanoi), Hue and Da Nang, he added./.