Vietnamese Embassy in France to press on with economic diplomacy: Ambassador 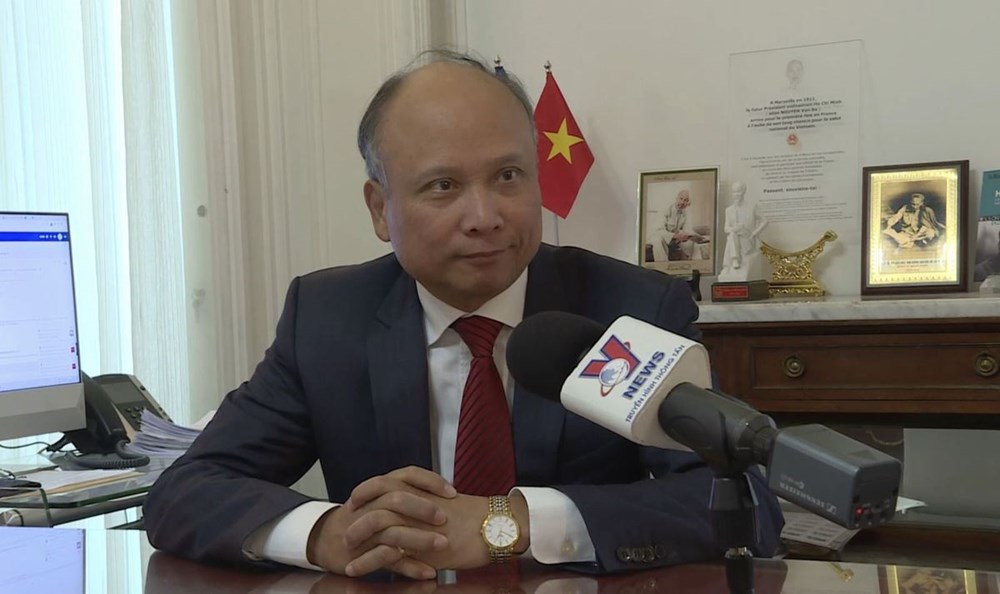 Vietnamese Ambassador to France Dinh Toan Thang in an interview granted to the Vietnam News Agency. (Photo: VNA)
Paris (VNA) – The Vietnamese Embassy in France is looking to promote economic diplomacy to contribute to national development, said Ambassador Dinh Toan Thang.
In a recent interview granted to the Vietnam News Agency (VNA)'s resident correspondent in Paris, he said economic diplomacy is one of the embassy’s focal tasks.
He noted a wide range of economic diplomatic activities have been carried out targeting French and international partners in France, encompassing localities, regions and enterprises, as well as factors that could contribute to economic partnerships with Vietnam.
During an official visit to France in November 2021, Prime Minister Pham Minh Chinh met with the country’s leaders, businesses and partners, which helped to promote bilateral economic ties.
Based on the outcomes of the trip, the embassy has stepped up coordination with other representatives bodies in trade, investment promotion, and science - technology to pay working visits to 10 economic hubs in the country and hold seven business forums along with nearby Andorra and Monaco, Thang went on.
The embassy's delegations have also visited over 100 French enterprises to discuss cooperation potential, learn about their demands, and present Vietnam’s desire to seek economic partnership opportunities.
The ambassador noted the embassy will push ahead with economic diplomacy with France, especially capitalising on opportunities and benefits generated by the EU - Vietnam Free Trade Agreement (EVFTA), to create favourable conditions for Vietnam’s key products, including farm produce and garments, to further enter the French and EU markets.
Regarding investment, he said, it will boost meetings with leading French firms, especially those involved in clean energy, infrastructure, logistics, pharmaceuticals, healthcare, agriculture and aerospace industries, which are the fields where France has strengths and Vietnam has demands, to help the Southeast Asian nation make economic breakthroughs.
The science and technology content of investment projects will also receive more attention, the diplomat added.
More efforts will be made to enhance business-to-business and locality-to-locality relations to form an extensive economic cooperation network between the two countries, Thang said.
The embassy will also work to organise more activities with France-based multilateral organisations such as the Organisation for Economic Cooperation and Development (OECD) and the International Organisation of La Francophonie so that they can help Vietnam build economic development strategies and strengthen ties with African partners, according to the ambassador./.
en.vietnamplus.vn