A Vietnamese association in the Japanese city of Kitakyushu has been founded, representing nearly 3,000 Vietnamese expats living here. 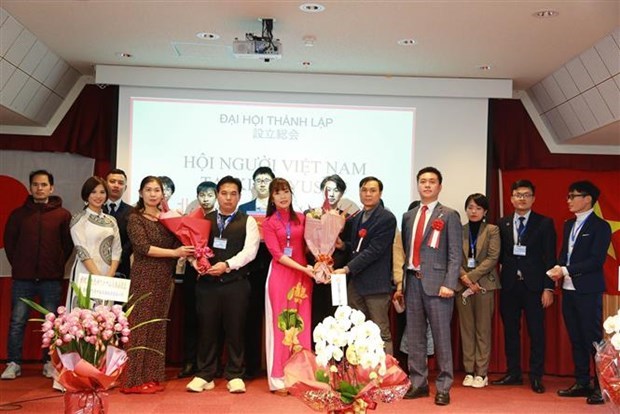 Tokyo (VNA) – A Vietnamese association in the Japanese city of Kitakyushu has been founded, representing nearly 3,000 Vietnamese expats living here. Its founding congress, which was attended by about 100 delegates, elected a 13-member executive committee chaired by President Ta Minh Thu, a Vietnamese woman living in Kitakyushu for more than 10 years. Two Japanese people, Matsushita – a pharmacist and Masuda Shin – a professor, who have made great contributions to enhancing the friendship between the two countries, were voted as honourable members of the executive committee. Addressing the event, Vietnamese Consul General in Fukuoka Vu Binh expected the association would have meaningful activities not only for the local community but also the homeland and contribute to further strengthening the bilateral ties between Kitakyushu and Hai Phong – its Vietnamese twin city, and Vietnam and Japan at large. Head of Kitakyushu’s international affairs department Oba Chie affirmed that the city’s authority is delight to see the Vietnamese community here growing day by day. She also hoped that the association would help tighten the relationship between Kitakyushu and Hai Phong. In her remark delivered virtually from Vietnam, Nguyen Thi Thanh Huong, Deputy Director of Hai Phong’s Department of External Affairs, highly spoke of the twin-city relations and described the establishment of the association as an important event that not only benefits the bilateral ties between the two cities but also facilitates the promotion of Vietnamese culture in Japan. The Consulate General of Vietnam in Fukuoka later took the occasion to present the Vietnamese Association in Kitakyushu a set of Vietnamese language teaching books in support of the opening of classes providing Vietnamese language lessons for Vietnamese children and Japanese people in the coming time./.