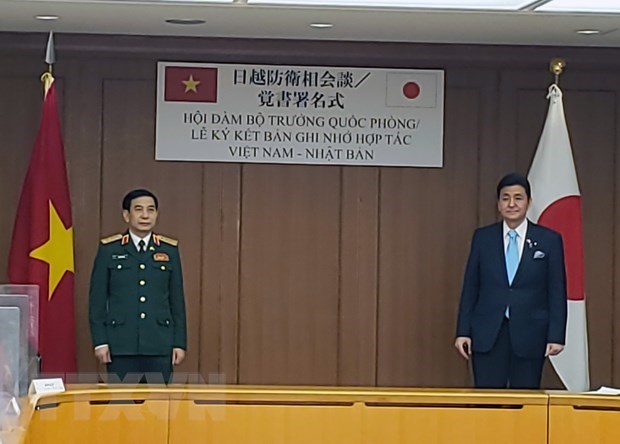 Tokyo (VNA) – Vietnamese Minister of National Defence Gen. Phan Van Giang held talks with Japanese Minister of Defence Kishi Nobuo in Tokyo on November 23, within the framework of Prime Minister Pham Minh Chinh’s official visit to Japan. Kishi said Giang’s ongoing visit will make an important contribution to maintaining momentum of cooperation, promoting the exchange of views on issues of mutual concern and orienting cooperation fields that need to be deployed in the coming time. The two ministers held that based on the Memorandum of Understanding (MoU) on Bilateral Defence Cooperation and Exchanges signed in October 2011 and the Joint Vision Statement on Defence Cooperation towards the next decade inked in April 2018, the two sides have closely coordinated together and promoted defence ties in a comprehensive, practical and effective manner in line with the Vietnam-Japan extensive strategic partnership. They exchanged views on global and regional issues of mutual concern, including the importance of freedom of navigation and aviation amid complicated developments in the region and the world as well. The two ministers affirmed the importance of respect for international law, including the 1982 United Nations Convention on the Law of the Sea (UNCLOS), in settling differences among concerned parties in disputed areas such as the East Sea and the East China Sea. They expected concerned sides to restrain, not to use force or threaten to use force, and settle disputes via peaceful measures on the basis of international law. In the coming time, the two ministers consented to direct relevant agencies of the two defence ministries to actively deploy agreements reached by their leaders, including an agreement on the transfer of military equipment and technology signed in September 2021 and two MoUs inked during this visit. Giang voiced his support for Kishi’s proposal on holding an ASEAN-Japan Defence Ministers’ Informal Meeting and backed Japan’s active participation in ASEAN-led multilateral defence cooperation mechanisms, especially ASEAN Defence Ministers Meeting Plus (ADMM ), thus contributing to peace, stability, cooperation and development in the region and the world at large. Both ministers spoke highly of the results of the 8th defence policy dialogue at the deputy minister level held earlier and agreed to assign authorised agencies to effectively carry out the consented contents, thereby strengthening Vietnam-Japan defence ties in the new development period. Following the talks, the two ministers witnessed the signing of two MoUs on cooperation in military medicine and cybersecurity between the two defence ministries. As part of the visit, Minister of National Defence Gen. Phan Van Giang also received Gen. Koji Yamazaki, Chief of Staff of the Joint Staff of Japan./.