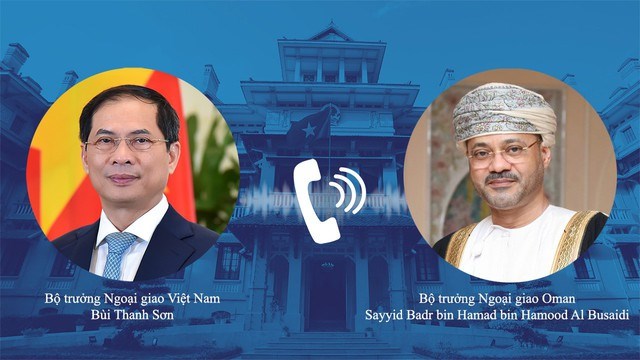 Minister of Foreign Affairs Bui Thanh Son talks over phone with his Omani counterpart Sayyid Badr bin Hamad bin Hamood Al Busaidi on June 22. (Photo: VNA)
Hanoi (VNA) – Minister of Foreign Affairs Bui Thanh Son talked over phone with his Omani counterpart Sayyid Badr bin Hamad bin Hamood Al Busaidi on June 22 after Vietnam and Oman celebrated the 30th anniversary of their diplomatic ties (June 9).
Son highly valued remarkable developments in cooperation between the two countries over the past three decades in politics, diplomacy, economy and trade, saying they have maintained delegation exchanges and mutual support at international forums, and in natural disaster response and the COVID-19 fight.
He viewed economic cooperation as a bright spot in the bilateral ties, with two-way trade hitting 338.1 million USD last year, nearly doubling the figure in the previous year.
The Vietnam-Oman Investment (VOI) fund has operated effectively, with an array of projects rolled out in essential fields in Vietnam like water management, agriculture, health care and renewable energy, the minister continued.
For his part, the Omani minister lauded achievements Vietnam has recorded in politics, external relations, economy and social affairs, and affirmed that Oman always attaches importance to promoting its multi-faceted cooperation with the Southeast Asian nation.
The two ministers shared the view that there is still ample room for the bilateral cooperation, especially in economy, trade, investment, labour, agriculture, fishery and seaports.
Regarding measures to consolidate and improve the efficiency of cooperation, they said Vietnam and Oman should step up the exchange of delegations at all levels, particularly the high-level one, continue their close coordination at international forums and organisations, and maintain the existing cooperation mechanisms such as the inter-governmental committee and political consultation between the two foreign ministries.
To create breakthroughs in economic collaboration, the ministers stressed that the two countries need to coordinate in trade and investment promotion, increase information exchange and business connectivity, and speed up negotiations of major cooperation agreements to consolidate the legal framework for the bilateral cooperation.
Son used the occasion to invite the Omani minister to visit Vietnam, and the latter accepted the invitation with pleasure.
The same day, Son hosted a reception for Abdulnasser Alshaali, Assistant Minister for Economic and Trade Affairs at Ministry of Foreign Affairs and International Cooperation of the United Arab Emirates (UAE) in Hanoi. 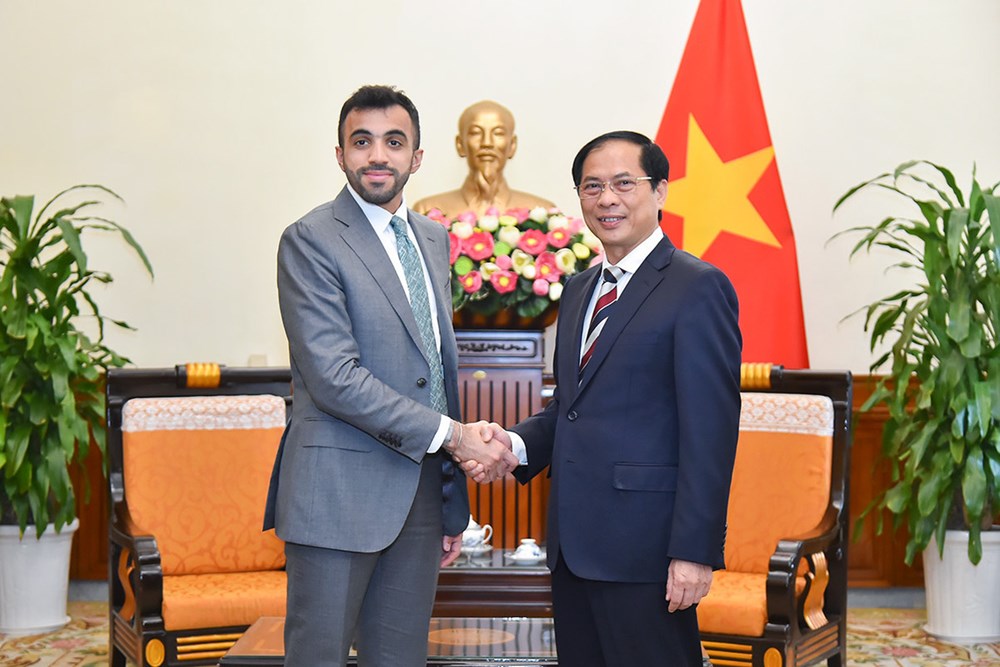 Minister of Foreign Affairs Bui Thanh Son (right) and Abdulnasser Alshaali, Assistant Minister for Economic and Trade Affairs at Ministry of Foreign Affairs and International Cooperation of the United Arab Emirates (UAE) (Photo: VNA)
The Vietnamese minister noted with pleasure the rapid and strong developments in the bilateral relations, especially in economy, trade and investment.
He affirmed the importance Vietnam attaches to the friendship and multi-faceted cooperation with the UAE, one of its leading trade, investment and labour partners in the Middle East.
The minister urged the two sides to enhance all-level delegation exchanges and soon organise the second political consultation between the two foreign ministries, while taking specific measures to foster collaboration, particularly in economy, trade and investment.
Son highlighted the initiative to establish a joint business council with the participation of state management agencies and enterprises of both sides.
Vietnam will create optimal conditions for UAE firms to seek and join business and investment projects in the Southeast Asian nation, he said, calling on them to increase investments in agriculture.
The minister suggested accelerating the negotiations and signing of cooperation documents in finance and banking to create a legal corridor for bilateral collaboration.
Speaking highly of Vietnam’s achievements in national construction and development, Abdulnasser Al Shaali emphasised that the UAE attaches importance to the country’s role and influence in Asia-Pacific.
The UAE wishes to boost multi-faceted cooperation with Vietnam, particularly in economy, push ahead with the establishment of the business council as well as the negotiations and signing of a bilateral free trade agreement, and utilise the UAE’s existing preferential policies to bring Vietnamese goods to the Middle East and Africa, he said.
The UAE also wishes to forge cooperation with the Association of Southeast Asian Nations (ASEAN), he added.
Earlier the same day, Abdulnasser Al Shaali held talks with Assistant to the Minister of Foreign Affairs Nguyen Minh Hang, during which they agreed on orientations and measures to beef up the bilateral ties in the time ahead.
On this occasion, the two sides held a roundtable seminar that brought together many UAE businesses operating in transport, finance, investment, education and energy.
Last year, despite difficulties caused by the COVID-19 pandemic, the two-way trade reached 5.3 billion USD, up 21 percent year-on-year./.
en.vietnamplus.vn