Ambassador of the Dominican Republic to Vietnam Francisco Rodríguez highlighted the close-knit relations between the two nations while addressing a ceremony to commemorate his country’s first President Juan Bosch at Hoa Binh (Peace) Park in Hanoi on March 17. 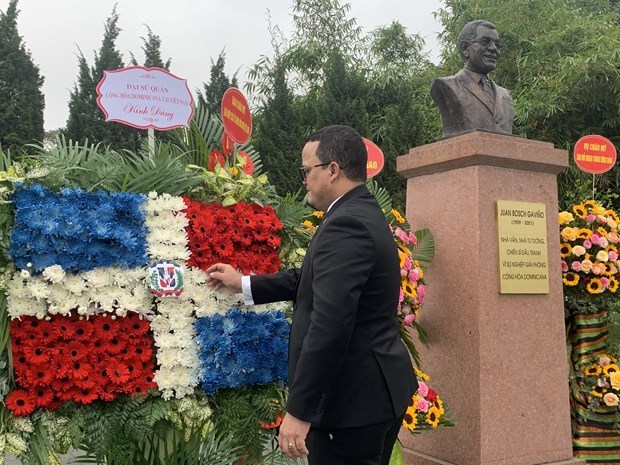 Ambassador of the Dominican Republic to Vietnam Francisco Rodríguez lays a wreath at the bust of Juan Bosch at Hoa Binh Park in Hanoi on March 17. (Photo: VNA)
Hanoi (VNA) – Ambassador of the Dominican Republic to Vietnam Francisco Rodríguez highlighted the close-knit relations between the two nations while addressing a ceremony to commemorate his country’s first President Juan Bosch at Hoa Binh (Peace) Park in Hanoi on March 17.
Professor Juan Bosch (1909 - 2001) was a writer, an ideologist, and an activist for the liberation of the Dominican Republic and Latin America. He took the lead in the struggle against dictatorial and oppressive regimes to liberate the peoples in Latin America in the 1930s. The founder of the Dominican Revolutionary Party became the first democratically-elected President of the Dominican Republic in February 1963, putting an end to the over-40-year rule of the dictatorial regime of Rafael Trujillo.
Both Juan Bosch and late President Ho Chi Minh of Vietnam were revolutionaries who made tireless efforts for the people’s freedom and happiness and for an increasingly better society, Rodríguez said at the ceremony, which was participated by representatives of the Party Central Committee’s Commission for External Relations, the Ministry of Foreign Affairs, and the Vietnam Union of Friendship Organisations.
The two leaders laid the foundation for the solidarity and friendship between two nations, he said, noting that Juan Bosch met President Ho Chi Minh in 1965, when the former came to Hanoi to attend a conference on Latin American countries’ solidarity with Vietnam. 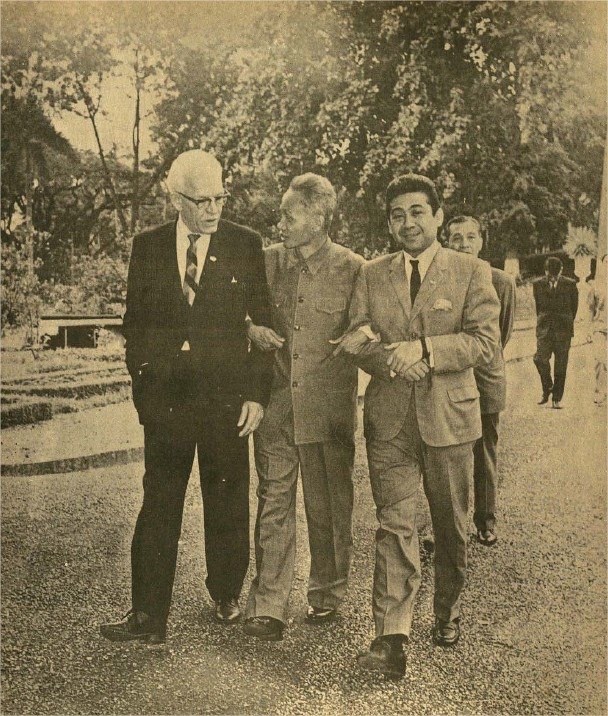 Then Vietnamese Prime Minister Pham Van Dong (centre) talks to Juan Bosch in Hanoi in 1971. (File photo)
The two countries set up diplomatic ties on July 7, 2005.
Besides, Juan Bosch always believed in the definite success of the Vietnamese people’s fight for national liberation and reunification, the diplomat added.
To honour the late leader of Vietnam, a Ho Chi Minh park and monument were unveiled in Santo Domingo capital in February 2013. Despite their geographical distance, Vietnam and the Dominican Republic are always strongly inter-connected thanks to their similarities in the desire for freedom and social progress, according to the diplomat.
On this occasion, the ambassador expressed his honour to be appointed as the first ambassador of the Dominican Republic to Vietnam, adding that preparations are being made for the inauguration of his country’s embassy in Hanoi, which will mark an important milestone in bilateral relations.
He also voiced his hope for stronger cooperation in multiple fields such as diplomacy, trade, science, sports, culture, tourism, telecommunications, and agriculture./.
en.vietnamplus.vn