Vietnam, Czech Republic beef up cooperation in fight against crimes

The Vietnamese Ministry of Public Security and legal enforcement agencies of the Czech Republic have been working closely together to fight crimes, especially trans-national, hi-tech, drug, and human trafficking crimes while taking measures to protect citizens of each country, said Minister of Public Security Gen. To Lam. 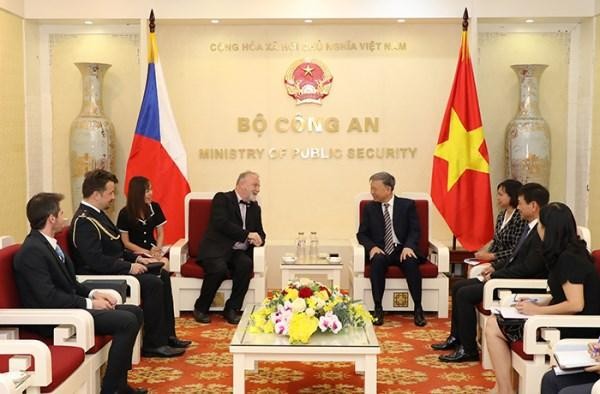 Minister of Public Security Gen. To Lam (right) and the Ambassador of the Czech Republic to Vietnam, Hynek Kmonicek, at the reception (Photo: VNA)

During a reception in Hanoi on November 2 for the newly-appointed Ambassador of the Czech Republic to Vietnam, Hynek Kmonicek, Lam suggested both sides continue facilitating visits at all levels, update information and share experience in combating organised, trans-national, hi-tech and human trafficking crimes.

He proposed preventing any individual or organisation from taking advantage of one country to sabotage the other; jointly ensuring security and safety of investment, trade, labour, study and tourism activities of the two nations' people; guaranteeing legitimate rights and interests of citizens and representative offices of one country in the territory of the other, and cooperating to ensure security for visiting high-ranking delegations.

Lam suggested the ambassador discuss with the Czech Republic’s relevant agencies the possibility of negotiating a bilateral extradition agreement and signing a new agreement on judicial assistance in criminal and civil affairs in replace of the one signed in 1984.

He called for attention to coordination in fields where both nations have strengths like national defence, manufacturing, energy, mining, health care and agriculture, thus making the most of advantage brought about by the EU-Vietnam Free Trade Agreement (EVFTA).

The minister expressed his belief that the diplomat will serve as a bridge to raise mutual understanding and promote cooperation in promising areas, particularly in security and order, and those within the framework of signed agreements.

Kmonicek, for his part, spoke highly of the traditional and fine friendship between the Czech Republic and Vietnam.

The ambassador pledged that in his capacity, he will do his best to reinforce the bilateral relationship, including ties in security and order.