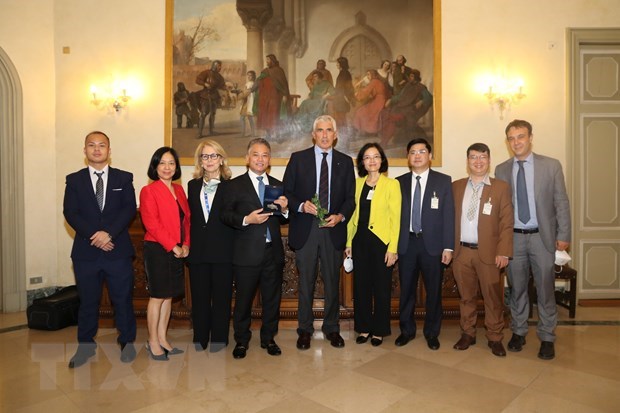 Co-organised by the Inter-Parliamentary Union (IPU) and the Italian Parliament, the meeting was held in preparation for the 26th UN Climate Change Conference (COP26), attracting 330 delegates from over 70 countries representing IPU member parliaments. Participants at the event expressed support for the goal of ensuring the global greenhouse emission at zero by 2050 and limiting the global warming to 1.5 degrees Celsius. They highlighted the role and actions of parliaments, saying that they are crucial to ensuring goals in the Paris Agreement 2015 on Climate Change. Speaking at the discussion on green approaches to post-COVID-19 recovery, the Vietnamese delegation suggested that the green economy policy should be drastically performed at national, regional and global level, within the framework of the UN Sustainable Development Goals 2030 and the 2015 Paris Agreement on Climate Change. The Vietnamese side proposed building a fair and effective legal corridor, encouraging the development of individuals, organisations and enterprises in a green manner, and raising public awareness of environment protection. On the occasion, the Vietnamese delegation held bilateral meetings with President of the Foreign Affairs Committee at the Italian Chamber of Deputies Piero Fassino, President of the Italian Parliamentarians’ Group at IPU and Honorary President of the IPU Pier Ferdinando Casini, and Chairwoman of the Italian Friendship Parliamentarians’ Group with Vietnam Chiara Gribaudo. At meetings, the Italian side affirmed that they consider Vietnam an important partner and wished to enhance strategic partnership with Vietnam in various areas. They suggested both sides offer mutual support at regional and global multilateral forums, and share experience in issues of shared concern. The Vietnamese side thanked Italy for offering COVID-19 vaccine supplies to the country, proposed several measures to boost ties between the two legislatures and nations, and hoped that the Italian Parliament will soon ratify the EU-Vietnam Investment Protection Agreement (IPA). On the occasion, the Vietnamese delegation met delegations from Russia, the Republic of Korea, the UK and Indonesia to discuss bilateral ties and issues of shared concern./.