Two Japanese have been appointed as Honourary Consuls General of Vietnam in Nagoya and Mie cities who pledged to do their utmost to developing Vietnam and its ties with Japan. 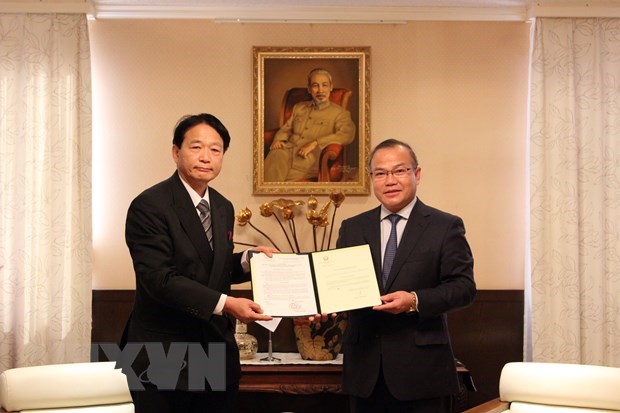 Tokyo (VNA) – Two Japanese have been appointed as Honourary Consuls General of Vietnam in Nagoya and Mie cities who pledged to do their utmost to developing Vietnam and its ties with Japan. During a ceremony held on January 14, Vietnamese Ambassador to Japan Vu Hong Nam, on behalf of Foreign Minister Bui Thanh Son, handed over the appointment decisions to the two Japanese citizens. Accordingly, Prof. Dr. Nagato Natsume is acting as Honorary Consul General of Vietnam in Nagoya for the second term. Moriyuki Taniguchi will hold the same position in Mie within the next three years. Speaking at the event, Nam expressed his hope that the consuls general will help further expand the strategic partnership between Vietnam and Japan, and provide assistance for Vietnamese students in Japan and Japanese enterprises in the two cities to invest in Vietnam. He himself also vowed to offer the best support for the consuls general so that they can successfully fulfill their mission. Natsume is Director of the Japanese Cleft Palate Foundation. The 65-year-old doctor has worked tirelessly to support Vietnamese children with cleft palate to receive life-changing surgeries since 1990 and transfer technologies in this field to Vietnamese doctors. As Honorary Consul of Vietnam in Nagoya, he contributed to establishing Aichi-Vietnam Friendship Association in April 2018. He plans to found a research institute in Vietnam that will focus on not only medical studies but also other fields this April.

73-year-old Taniguchi served as a member of Aichi council from 1983 – 1988. In 2011, he established the Japan-Vietnam association for friendship economic exchanges, acting as its president./.