The socio-economic impacts of the two-year-old EU-Vietnam Free Trade Agreement (EVFTA) along with issues that the deal poses for Vietnam were under focus at a scientific seminar held in Hanoi on August 4. 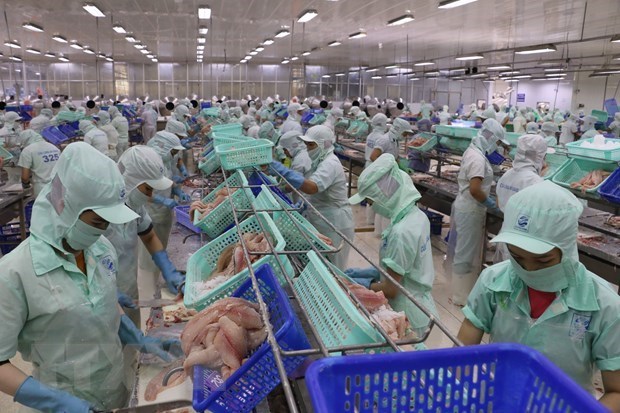 Illustrative image (Photo: VNA)
The socio-economic impacts of the two-year-old EU-Vietnam Free Trade Agreement (EVFTA) along with issues that the deal poses for Vietnam were under focus at a scientific seminar held in Hanoi on August 4.
Opening the event, Vice President of the Vietnam Academy of Social Sciences (VASS) Dang Xuan Thanh said despite the obvious benefits brought by the EVFTA, the optimization of incentives offered by the deal has not met expectations.
He cited examples such as Vietnam’s exports still focus on some traditional markets, and the mechanism for linking localities with Vietnamese representative agencies abroad for trade and investment promotion remains incomplete.
He hoped the seminar would identify outstanding problems in and draw lessons from the enforcement of the EVFTA over the past two years, and work out solutions to better utilize the deal in the following years.
Regarding the impacts of the EVFTA on Vietnam’s trade and investment, researcher Hoang Xuan Trung from the Institute for Europe Studies highlighted that bilateral trade increased by 14.5% year-on-year in 2021 to 57 billion USD, and 14.6% in the first six months of this year to 31.7 percent.
However, he pointed to arising challenges such as the limited capability of Vietnamese enterprises to make the best use of available incentives under the FTA, the increase in trade frauds in the digital trade environment, trade protection measures imposed by the EU against Vietnamese goods, and unforeseeable changes in the world security situation.
Participants exchanged views on the bilateral relations between Vietnam and EU members, localities and sectors’ experiences in carrying out the EVFTA, social issues arising in the enforcement of the deal, and possible ways to optimize the benefits of the FTA./.
en.vietnamplus.vn