Minister of Foreign Affairs Bui Thanh Son received Amanda Milling, Minister of State for Asia and the Middle East at the British Foreign, Commonwealth and Development Office, in Hanoi on March 29. 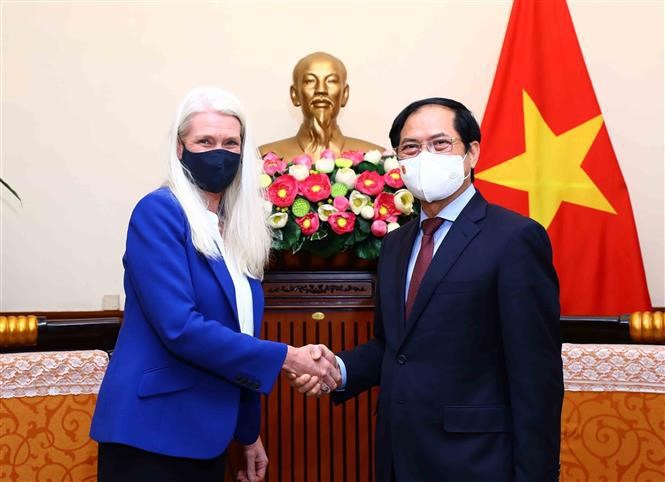 Minister of Foreign Affairs Bui Thanh Son (R) and British Minister of State for Asia and the Middle East Amanda Milling meet in Hanoi on March 29. (Photo: VNA)
Hanoi (VNA) – Minister of Foreign Affairs Bui Thanh Son received Amanda Milling, Minister of State for Asia and the Middle East at the British Foreign, Commonwealth and Development Office, in Hanoi on March 29.
Milling is on a working visit to Vietnam on the occasion of the 8th Vietnam - UK strategic dialogue at the deputy foreign minister level.
Minister Son expressed his delight at the strides in the two countries’ strategic partnership as seen in Prime Minister Pham Minh Chinh’s successful trip to the UK and attendance in the COP26 there from October 31 to November 3, 2021.
As the two countries are about to mark the 50th founding anniversary of diplomatic ties in 2023, Vietnam wishes to further intensify the strategic partnership with the UK, he said.
Son called for increasing high-level mutual visits; enhancing the key cooperation mechanisms, including the strategic dialogue at the deputy foreign minister level, the joint economic and trade cooperation committee, and the defence policy dialogue; stepping up trade and investment promotion activities to capitalise on the UK - Vietnam Free Trade Agreement (UKVFTA); and expanding ties in education - training, science - technology, and health care.
Minister of State Milling affirmed her country views Vietnam as an important partner in the region as it is looking to bolster cooperation with the Indo-Pacific, adding that the UK hopes to strengthen links in the fields matching the two sides’ strength and demand.
Highly valuing Vietnam’s strong commitment at COP26 to achieve net zero emissions by 2050, she said the UK will assist Vietnam to realise the commitments about emissions, climate change response, and sustainable energy transition.
The two officials agreed to keep their countries’ close coordination at multilateral forums, particularly the United Nations and regional cooperation mechanisms.
Milling spoke highly of Vietnam’s role and contributions as a non-permanent member of the UN Security Council during 2020 - 2021. She also appreciated the country’s support for the UK to become a full dialogue partner of the Association of Southeast Asian Nations (ASEAN).
On this occasion, Minister Son and the UK Minister of State also discussed some international and regional issues of common concern./.
en.vietnamplus.vn