Ambassador Giorgio Aliberti, head of the European Union Delegation to Vietnam, on February 23 affirmed that he will continue to support and facilitate the enhancement of cooperation between the State Audit Office of Vietnam (SAV) and the EU. 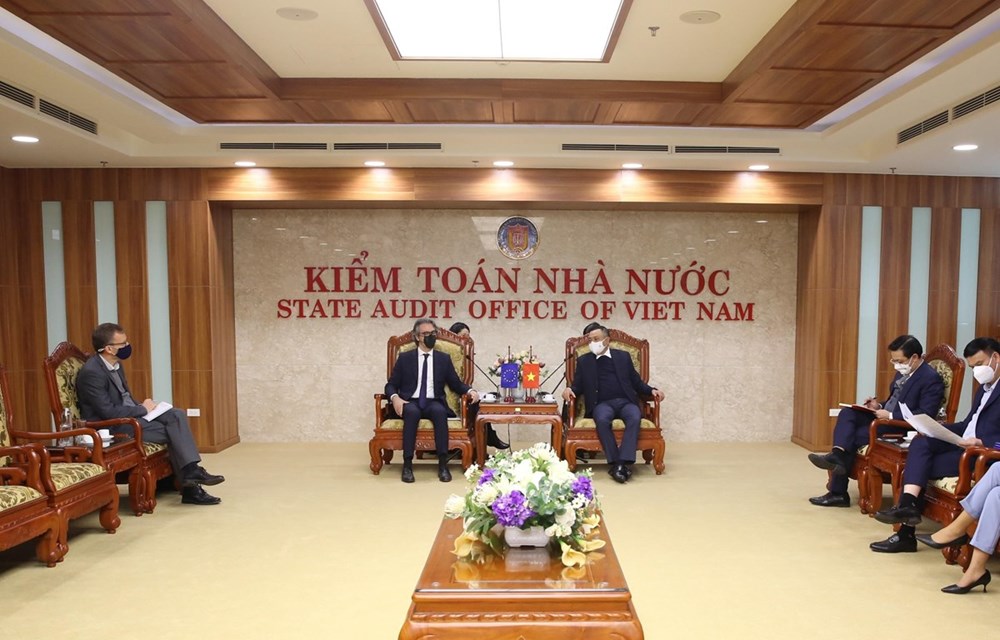 At the meeting between Ambassador Giorgio Aliberti, head of the European Union Delegation to Vietnam, and Auditor General Tran Sy Thanh (Photo: VNA)
Ambassador Giorgio Aliberti, head of the European Union Delegation to Vietnam, on February 23 affirmed that he will continue to support and facilitate the enhancement of cooperation between the State Audit Office of Vietnam (SAV) and the EU.
At a meeting with Auditor General Tran Sy Thanh in Hanoi, Aliberti said from 2021, the EU has agreed to support Vietnam through a multilateral cooperation programme.
Under the programme, during the 2021-2024 period, the EU will provide 210 EUR in non-refundable aid for Vietnam, he said, adding that with the package, the SAV will become an important partner of the EU in the time ahead.
Aliberti stressed the EU’s commitment to technical assistance to the SAV to enable the office access and utilise international standards, while helping Vietnam strengthen its governance system. For his part, Thanh hailed the ambassador’s contribution in his capacity as head of the EU Delegation to Vietnam, especially his role in urging the EU to ratify the EU-Vietnam Free Trade Agreement (EVFTA) and the EU-Vietnam Investment Protection Agreement (EVIPA).
The Auditor General briefed Aliberti on his office’s operations last year, notably its Chairmanship of the Asian Organisation of Supreme Audit Institutions (ASOSAI) for the 2018-2021 tenure.
The office has also issued a mid-term auditing plan for 2022-2024, and another plan for 2022, which are associated with the strategy on SAV development by 2030.
The SAV will continue to serve as an effective, essential tool of the Party and the State in inspecting and supervising the management and use of finance and public assets, Thanh said.
He thanked the EU for its great support to the SAV since the establishment of the office, highlighting the EU’s major projects for Vietnam with total funding of 3.9 million EUR.
Apart from the projects, the EU launched a software training course for 22 Vietnamese auditors and officials last December, he added.
The Auditor General expressed his hope for more support from the EU, with a focus on personnel training in such new spheres as IT, public debt, mining and environmental audits./.
VNA
en.vietnamplus.vn