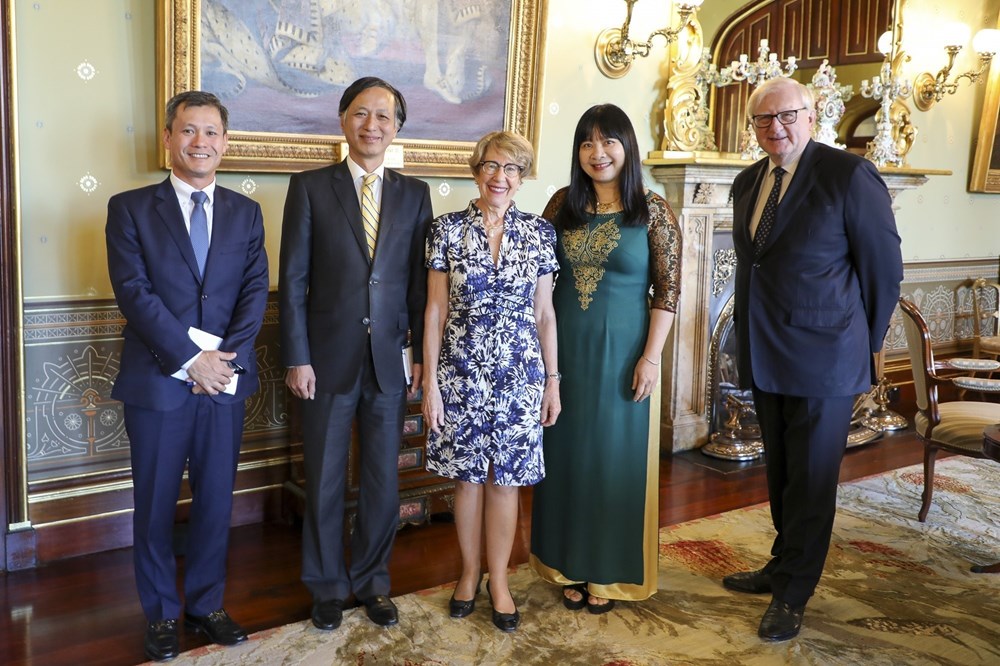 Vietnamese Ambassador Nguyen Tat Thanh (second, left) pays a courtesy visit to NSW Governor Margaret Beazley (centre). (Photo: VNA)
Sydney (VNA) – Vietnamese Ambassador to Australia Nguyen Tat Thanh has visited New South Wales to seek ways to foster cooperation between Vietnamese localities and the Australian state.
During his visit on May 4 and 5, Thanh paid a courtesy visit to NSW Governor Margaret Beazley, who stressed that NSW attaches importance to cooperation with Vietnamese localities.
The Governor also agreed to coordinate with the Vietnamese side in celebrating the 50th founding anniversary of Australia-Vietnam diplomatic ties in 2023, saying she is willing to welcome Vietnamese high-ranking delegations and will visit Vietnamese localities soon to boost the bilateral comprehensive cooperation.
In reply, Thanh said he hopes that NSW will soon implement an action programme to realise the 2019 memorandum of understanding on cooperation with Ho Chi Minh City, and consider expanding collaboration with other localities of Vietnam.
The ambassador also had meetings with leaders of the NSW Parliament, who noted with pleasure the development of the Vietnam-Australia relations, including their legislative ties.
At meetings with Jess Scully, Deputy Lord Mayor of the City of Sydney, and Joseph La Posta, Chief Executive Officer, Multicultural NSW, Thanh thanked local leaders for their assistance to the Vietnamese community, and called for their further support in preserving Vietnamese language and culture in NSW.
The diplomat also met with Chief Justice of NSW Andrew Bell, and representatives from Australian investors and businesses. Thanh noted his hope for stronger trade and investment ties between Vietnamese localities and NSW as the trade cooperation remained modest.
He used the occasion to make a field trip to the University of New South Wales and the University of Technology Sydney, which are leading educational institutions in Australia.
The ambassador said the two sides should step up cooperation in science and technology, and expressed his hope for tripartile cooperation between Vietnamese and Australian universities and businesses from one of the two countries./.
en.vietnamplus.vn