BRG Group JSC and its Japanese partner, Sumitomo Corporation, on March 24 signed a joint-venture contract on expanding the FujiMart grocery supermarket chain in Vietnam, towards opening 50 new stores throughout the country by 2028. 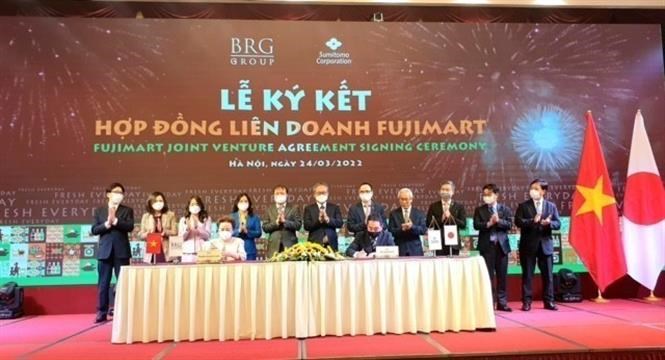 At the signing ceremony (Photo: VNA)

Hanoi (VNA) - BRG Group JSC and its Japanese partner, Sumitomo Corporation, on March 24 signed a joint-venture contract on expanding the FujiMart grocery supermarket chain in Vietnam, towards opening 50 new stores throughout the country by 2028.

Speaking at the signing ceremony, Chairman and General Manager of Sumitomo Corporation for Asia and Oceania Shiomi Keigo said the FujiMart supermarket chain is a perfect combination between the two famous brands of Japan and Vietnam to provide clean, safe and fresh products every day to consumers with a dedicated and professional service style.

Vietnam's retail market is said to develop quite strongly in recent years, witnessing a shift from the traditional form of small stores to modern one like supermarkets and convenience stores which offer superior levels of safety and convenience.

The impact of the COVID-19 pandemic has also prompted people to pay more attention to their health and thus preferring fresh and delicious foods with clear origins.

Chairwoman of BRG Group Nguyen Thi Nga said the firm has a long-term strategy with the desire to bring the best values to the community, adding that the FujiMart supermarket chain has become a friend of more and more families in Vietnam.

The contract between BRG and Sumitomo serves as a milestone for both sides when they officially enter a new phase in the retail field besides their on-going partnership in developing a smart city worth up to nearly 4.2 billion USD in Hanoi.

As planned, BRG Retail Co., Ltd – a subsidiary of BRG Group, will coordinate with Sumitomo Corporation to expand the FujiMart supermarket chain, aiming to annually open 5-10 new stores in the next seven years, and reach 50 more ones across the country by 2028.

Sumitomo Corporation and BRG Group launched the first FujiMart store in Hanoi in 2018, with three currently in operation./.