A Vietnamese delegation led by Foreign Minister Bui Thanh Son attended a dialogue between ASEAN FMs and representatives of the ASEAN Intergovernmental Commission on Human Rights (AICHR) in Cambodia on August 2. 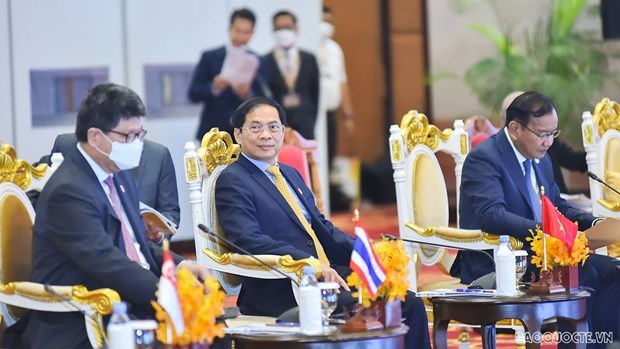 Foreign Minister Bui Thanh Son at the dialogue (Photo: baoquocte.vn)
A Vietnamese delegation led by Foreign Minister Bui Thanh Son attended a dialogue between ASEAN FMs and representatives of the ASEAN Intergovernmental Commission on Human Rights (AICHR) in Cambodia on August 2.
The dialogue took place within the framework of the 55th ASEAN Foreign Ministers' Meeting (AMM-55).
The AICHR representatives highlighted the significance of the ASEAN Human Rights Declaration on the occasion of the 10th anniversary of its issuance, along with the ten-member group’s efforts to implement commitments and protect fundamental freedoms, contributing to bringing a better life to people, even amid COVID-19.
Over the years, the commission has rolled out various activities in this regard, including dialogues, consultations and workshops.
The ASEAN ministers reaffirmed the significance and values of the ASEAN Human Rights Declaration in protecting and promoting human rights in the region, contributing to building the ASEAN Community.
They encouraged the commission to continue with dialogues and the integration of human rights into the community’s pillars, especially targeting vulnerable groups such as women, children, people with disabilities and migrant workers.
Son spoke highly of AICHR’s efforts to overcome difficulties and maintain its operations.
He also emphasised the importance of maintaining solidarity and observing the basic principles of ASEAN in implementing AICHR activities.
AICHR was inaugurated by the ASEAN Leaders on October 23, 2009 at the 15th ASEAN Summit in Cha-Am Hua Hin, Thailand. AICHR was designed to be an integral part of ASEAN’s organisational structure and an overarching institution with responsibility for the promotion and protection of human rights in ASEAN.
The ASEAN groups 10 member nations, namely Brunei, Cambodia, Indonesia, Laos, Malaysia, Myanmar, the Philippines, Singapore, Thailand and Vietnam./.
en.vietnamplus.vn