During the recent months and days, on and around the Thitu island belonging to Vietnam's Truong Sa (Spratly Islands) archipelago there have been a lot of activities by the Philippines and China that undermined Vietnam's sovereignty there and clearly violated international laws. 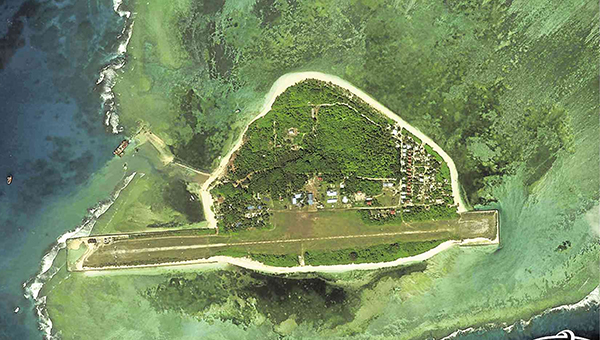 Similar activities of the navy and air force of the United States have also stirred concern. This island and the area around it became one political and security-related hotspot in the East Sea (internationally known as the South China Sea).

Thitu is the second biggest island in Vietnam's Truong Sa archipelago but is illegally administered by the Philippines. Despite continued strong protests of Vietnam, the Philippines started construction of a beaching ramp on the island and China sent a huge number of fishing boats with naval militia aboard to the maritime areas around the island.

Those activities have made the situation there tense and complicated. They violated severely Vietnam's sovereignty and territorial integrity as well as international law. They also absolutely contradicted the spirit and words of the Declaration on the Conduct of Parties in the East Sea (DOC) of 2002 to which both the Philippines and China are signatories.

Enhancing tension, ignoring international law, and not adhering to the DOC make all issues related to this island and to the East Sea more complicated and more difficult to be solved.

That would be destructive to the efforts being undertaken now to successfully complete the negotiations between the ASEAN and China on the Code of Conduct of Parties in the East Sea (COC).

Vietnam has good relationships with the Philippines and China and frankly wants to further strengthen those ties. Vietnam's stance is clear and consistent that the sovereignty and territorial integrity of Vietnam must be respected by everyone, and all related disputes should be peacefully resolved on the basis of international law and the DOC.

But the above-mentioned activities absolutely cannot be accepted. That is why Vietnam voiced deep concerns about it and strongly demands the other parties exercise restraint and immediately stop as well as do not repeat those activities in the future.

Mau is a former Vietnamese ambassador to Germany and Director General of the Policy Planning at Vietnam's Ministry of Foreign Affairs.
Vietnam News Agency