The Vietnamese Ministry of National Defence is ready to support Laos in terms of manpower and resources as the COVID-19 pandemic has still been developing complicatedly in both countries, Minister of National Defence General Phan Van Giang has said. 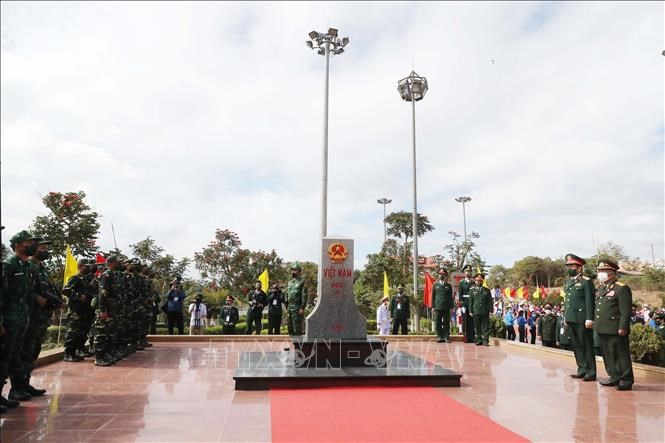 Quang Tri (VNA) – The Vietnamese Ministry of National Defence is ready to support Laos in terms of manpower and resources as the COVID-19 pandemic has still been developing complicatedly in both countries, Minister of National Defence General Phan Van Giang has said. Giang made the statement at the high-level talks between the defence ministries of Vietnam and Laos within the framework of the first Vietnam-Laos border defence friendship exchange in the central province of Quang Tri on December 12. He also emphasised the need to enhance the relationship between the armies of Vietnam, Laos and Cambodia, including the maintenance of the annual meeting between the three defence ministers. For his part, Lao Deputy Prime Minister and Minister of National Defence General Chansamone Chanyalath expressed his delight when the defence ministries of the two countries has successfully organised the Vietnam-Laos border defence friendship exchange for the first time, saying this is an important milestone of the bilateral security cooperation, contributing to raising the relationship to a new height. The meeting reflected the close friendship and solidarity between the two defence ministries, he said. At the meeting, the two sides appreciated the results of the 2nd Defence Policy Dialogue, affirming that this is a very important mechanism to unify a common perception on regional security issues of mutual concern. They also assessed the results of defence cooperation in the past time and set forth cooperation orientations in the coming time. The two sides held that although the COVID-19 pandemic remained complicated, defence cooperation between the two countries has been effectively implemented and achieved many positive results such as the signing of agreements on cooperation in rescue and relief, training cooperation and mutual assistance, especially in the prevention and control of COVID-19. In particular, the two sides successfully organissed the first Vietnam-Laos border defence friendship exchange which is considered as one of the key activities in the 2021 cooperation plan between the two defence ministries. Regarding cooperation orientations in the future, the two defence ministries reached consensus on contents discussed at the previous Defence Policy Dialogue at the deputy ministerial level. They underlined the need to step up communications to raise awareness among soldiers and people of the two countries on the great friendship, special solidarity and comprehensive cooperation between Vietnam and Laos; collaborate in organising training courses to improve capacity for its officers; and maintain existing cooperation mechanisms as well as supporting each other in the fight against COVID-19. After the talks, the ministers signed a protocol of cooperation on rescue and relief and the Vietnam-Laos Defence Cooperation Plan for 2022 between the two defence ministries. They also witnessed the signing of the Border Defence Cooperation Agreement between the Vietnam Border Guard Command and the General Department of Security and the General Department of Police under the Ministry of Security of Laos./.