The 31st Meeting of the States Parties to the 1982 United Nations Convention on the Law of the Sea (UNCLOS) took place at the UN headquarters in New York from June 21 to 25. 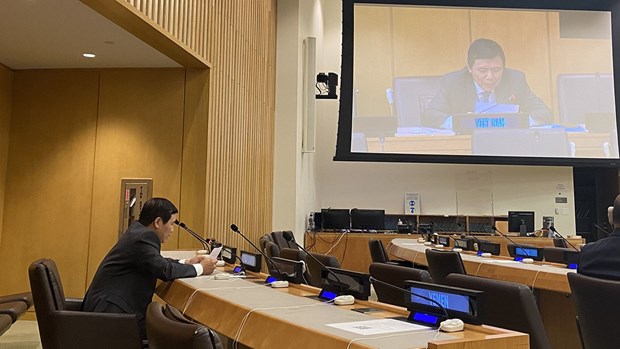 Ambassador Dang Dinh Quy, Permanent Representative of Vietnam to the UN, delivers a speech at the meeting (Photo: VNA)

New York (VNA) – The 31st Meeting of the States Parties to the 1982 United Nations Convention on the Law of the Sea (UNCLOS) is taking place at the UN headquarters in New York from June 21 to 25. The event looked into the reports by the bodies established under the convention such as the International Tribunal for the Law of the Sea, the Commission on the Limits of the Continental Shelf, and the International Seabed Authority, along with their procedural, budgetary, and personnel affairs. At the June 23 debate on the UN Secretary-General’s report about the issues related to seas and oceans, UN agencies’ activities, and international cooperation over the past year, participants called for adherence to the 1982 UNCLOS, and stronger regional and international cooperation in sea and ocean-related areas as well as in responding to such challenges as marine pollution and climate change, thereby contributing to the realisation of Sustainable Development Goal 14 on the conservation and sustainable development of seas and oceans. Addressing the meeting, Ambassador Dang Dinh Quy, Permanent Representative of Vietnam to the UN, reiterated that the 1982 UNCLOS is a comprehensive framework that regulates all activities in the oceans and seas, helping to guarantee safety, security, and freedom of navigation, maintain international peace and security, and carry out the 2030 Agenda for Sustainable Development. He highlighted Vietnam’s efforts to promote negotiations on maritime border demarcation with regional countries, the marine environment protection, and bilateral and multilateral cooperation in maintaining maritime security, fighting illegal, unreported and unregulated fishing, and developing the sea-based economy. With regard to the East Sea issue, Quy stated this body of water is an important international shipping route, and that the maintenance of peace, security, stability, safety, and freedom of navigation in the sea is critical to regional and international peace and development. All disputes must be settled by peaceful means on the basis of international law, including the UN Charter and the 1982 UNCLOS, with respect for diplomatic and legal processes, and without the use of force or threats to use force, he reaffirmed. The diplomat voiced his concern over some recent incidents in the East Sea that have seriously violated Vietnam’s sovereign right and jurisdiction. He called on the relevant parties to exercise self-restraint; not conduct militarisation or military activities complicating the situation, escalating disputes, and affecting safety and security of navigation and overflight in the East Sea which may threaten regional peace and stability; while fully implementing the Declaration on the Conduct of Parties in the East Sea and soon finalising a substantive and efficient Code of Conduct that matches international law, including the 1982 UNCLOS. The 1982 UNCLOS, taking effect on November 16, 1994, has been ratified by 186 states and international organisations. Fourteen other states have signed but yet to ratified the convention./.