Vietnam’s stance on the settlement of disputes in the East Sea is clear and consistent, spokeswoman of the Ministry of Foreign Affairs Le Thi Thu Hang on July 12. 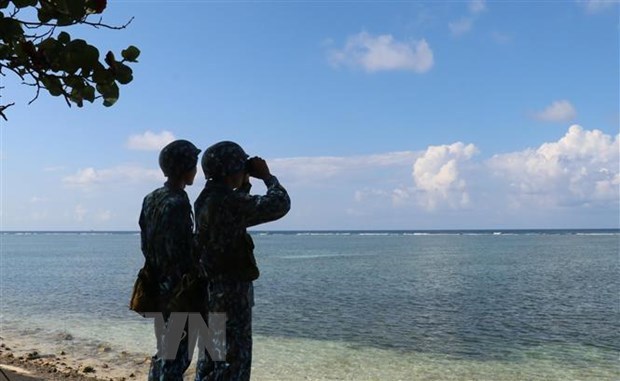 Vietnamese soldiers on a patrol on Son Ca island (Source: VNA)
Hanoi (VNA) – Vietnam’s stance on the settlement of disputes in the East Sea is clear and consistent, spokeswoman of the Ministry of Foreign Affairs Le Thi Thu Hang on July 12. Hang made the affirmation while responding to reporters’ question on Vietnam’s comments on the occasion of five years since the Permanent Court of Arbitration (PCA) issued its ruling on the East Sea issue. Vietnam always backs the settlement of disputes regarding sovereignty, sovereign rights and jurisdiction in the East Sea through diplomatic and legal processes, without the use of force or threats to use force, and by peaceful solutions and measures, in accordance with the UN Charter and the 1982 UN Convention on the Law of the Sea (UNCLOS). As a UNCLOS signatory and a coastal nation to the East Sea, Vietnam called on all concerned parties to respect and fully realise their legal obligations as stipulated in the convention, cooperate and actively and pragmatically contribute to maintaining peace, stability, security, safety and freedom of navigation and aviation, and order in the East Sea in line with international law, Hang said. On this occasion, the spokeswoman also reiterated Vietnam’s stance on its sovereignty over Hoang Sa (Paracel) and Truong Sa (Spratly) archipelagoes, and waters over which Vietnam has sovereignty, sovereign rights and jurisdiction as defined in the convention./.
VNA
https://en.vietnamplus.vn/vietnam-affirms-clear-consistent-stance-on-settlement-of-east-sea-disputes/204530.vnp
VietnamPlus, Vietnam News Agency (VNA) - Vietnamplus.vn