The Vietnam Coast Guard has for years worked to promote its external relation and international cooperation, creating favourable conditions for the implementation of its assigned tasks in contribution to keeping a peaceful and stable environment for national construction and defence from early and afar. 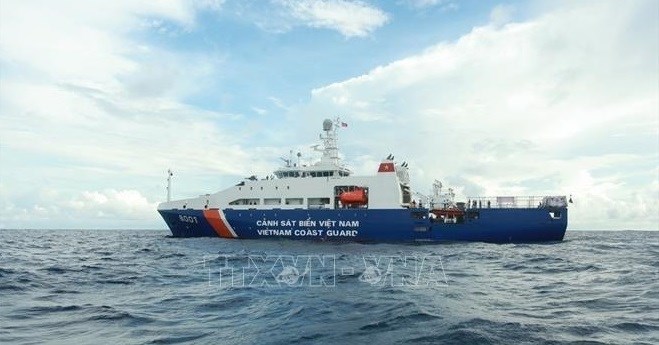 Vietnam Coast Guard's vessel coded 8001 is the largest of its kind in Vietnam, operating in the waters of the Truong Sa (Spratly) islands.

Hanoi (VNA) – The Vietnam Coast Guard has for years worked to promote its external relation and international cooperation, creating favourable conditions for the implementation of its assigned tasks in contribution to keeping a peaceful and stable environment for national construction and defence from early and afar.

Highlights in the force's international cooperation include the signing of a protocol on a hotline communication mechanism with the Cambodia National Committee of Maritime Security, a letter of intent with the Indonesian Maritime Security Agency (Bakamla) in 2017 and a letter of intent with Malaysia in 2019. Currently, the force’s Memoranda of Understanding (MoU) with Indonesia and the Philippines are in the preparation phase.

Under those documents, many practical and effective cooperation activities have been implemented, including those that contributed to Vietnam’s fight against illegal, unreported, and unregulated (IUU) fishing in recent years.

Many countries, such as the US, Japan, India and the Republic of Korea, have been willing to offer Vietnam their practical and effective support in terms of equipment, ships, logistical facilities and training to improve Vietnam's coast guards' capacity and knowledge on law, security and safety in law enforcement at sea.

The visits and exchanges of the Vietnam Coast Guard vessels to India in 2018 and Japan in 2019 contributed to enhancing the position of the force in the region and in the international arena. These trips provided opportunities to organise training for the force's officers and soldiers, thus improving its capacity.

In addition, the Vietnam Coast Guard has actively and responsibly participated in multilateral mechanisms and forums, including the Regional Cooperation Agreement on Combating Piracy and Armed Robbery against Ships in Asia (ReCAAP); the Southeast Asia Maritime Law Enforcement Initiative (SEAMLEI); and the Coast Guard Global Summit (CGGS).

In the time to come, the force will continue to promote its external relations and cooperation with its foreign counterparts, with priority given to countries in the region, those with sea areas bordering Vietnam, and traditional partners.

The Vietnam Coast Guard’s proactive expansion of its relationships with maritime law enforcement forces of other countries has contributed to maintaining security, order, safety, peace and stability in the waters of Vietnam, and to deepening the country's ties with Southeast Asian nations. Such external activities deliver a message of cooperation, growth and integration./.