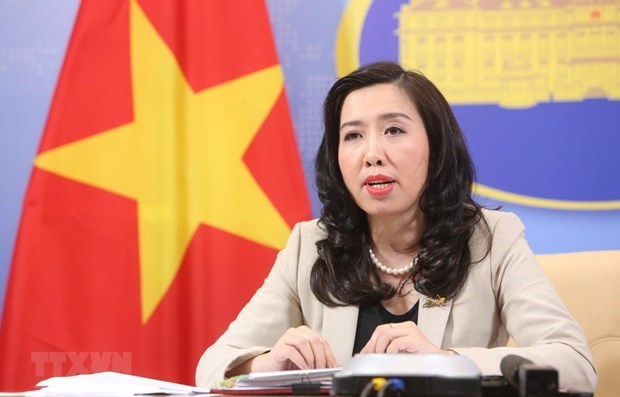 At the ministry’s regular press conference held online on July 8, Hang answered reporters’ queries about the information that a research vessel of Sun Yat-sen University (China) will head to the East Sea, specifically Vietnam’s Hoang Sa archipelago, in October 2021.

As affirmed many times, Vietnam has sufficient legal basis and historical evidence affirming its sovereignty over the Hoang Sa and Truong Sa archipelagoes as well as legitimate rights over its territorial waters as defined in the 1982 United Nations Convention on the Law of the Sea (UNCLOS), Hang stated.

She stressed that all exploration, survey and scientific research activities in the Hoang Sa archipelago without Vietnam’s permission violate its sovereignty and related rights, and are illegal and valueless.

Regarding women’s participation in Vietnam’s coast guard force, Hang affirmed that the Vietnamese Party and State always strive to perfect its policies and laws to ensure gender equality and empowerment for women, thus creating favourable conditions for them to access and take part in aspects of the social life, including improving their role and position in the armed forces.

Vietnam's efforts to ensure gender equality has been recognised and highly appreciated by the international community, she said.

According to the spokeswoman, female coast guards in different positions have well fulfilled their assigned tasks, helping to realise the Party and State’s political commitment as a responsible member of the international community, standing ready to join hands to deal with international issues, maintain an environment of peace, security and stability for the sake of cooperation and development in the region and the world./.