The Diplomatic Academy of Vietnam (DAV) held the 13th international conference on the East Sea under the theme "Looking back to a brighter future" in Hanoi on November 18. 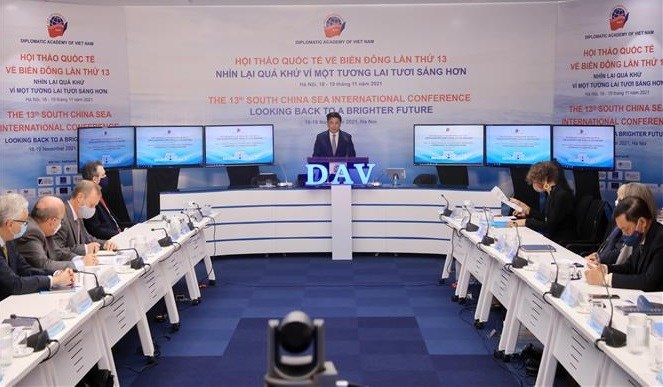 At the event (Photo: VNA)

Hanoi (VNA) – The Diplomatic Academy of Vietnam (DAV) held the 13th international conference on the East Sea under the theme "Looking back to a brighter future" in Hanoi on November 18.

The event attracted the in-person participation of over 180 delegates and more than 400 others attended via videoconference. There are around 60 speakers at the event, who are experts in the field from 30 countries.

In his welcoming remarks, Deputy Minister of Foreign Affairs Pham Quang Hieu said with its location in the centre of the Indo-Pacific, any developments in the East Sea can easily become precedents for the region and other regions in the world. The East Sea situation has still posed new concerns over the past year. Competition among major powers and new cooperation mechanisms in the region have posed new problems to the evolving regional architecture, especially ASEAN’s central role.

He expressed his hope that the event will continue to be a leading prestigious forum to discuss collaboration and development in the East Sea.

Hieu proposed that the workshop focus on four issues, namely ways to increase dialogues among nations, especially claimant ones, to control disputes and seek acceptable solutions; measures to strengthen order in the East Sea based on international law, particularly the United Nations Convention on the Law of the Sea (UNCLOS); how to build a multilateral security architecture in the region to effectively handle traditional and non-traditional security challenges with ASEAN's central role; and solutions to boost marine collaboration in various areas, and the application of technological advances in marine management, especially blue economy, to restore economic recovery and supply chain at sea.

The two-day event will feature eight sessions with various topics such as the East Sea in the changing global context, consolidating legal order in the East Sea over the past five years, ASEAN and the Quadrilateral Security Dialogue in regional architecture, promoting diplomatic science for common benefits of oceans, and transparency via supervision technology, among others.

In addition, three young leaders' sessions will be held to provide a platform for young generations to raise their voices about the East Sea issue. Following the conference, there will be commentary sessions with the participation of leading Vietnamese experts./.