Vietnam’s relations with Belgium, EU now at their prime: ambassador

Ambassador Nguyen Van Thao affirmed that the country’s relations with Belgium and the EU are now at their prime while addressing a banquet held on September 19 in celebration of Vietnam’s 77th National Day (September 2). 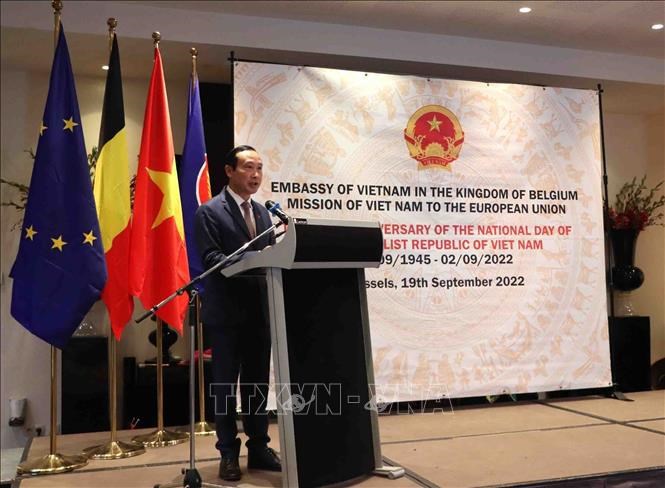 Vietnamese Ambassador to Belgium and Luxembourg Nguyen Van Thao, who is also head of Vietnam's Delegation to the EU, addresses the event on September 19. (Photo: VNA)
Brussels (VNA) – Ambassador Nguyen Van Thao affirmed that the country’s relations with Belgium and the EU are now at their prime while addressing a banquet held on September 19 in celebration of Vietnam’s 77th National Day (September 2).
In his remarks, the Vietnamese Ambassador to Belgium and Luxembourg reviewed the historic milestones since then President Ho Chi Minh read the Independence Declaration that founded the Democratic Republic of Vietnam, now the Socialist Republic of Vietnam, on September 2, 1945.
He took the occasion to thank Belgian and EU leaders for supporting the Southeast Asian nation in the fight against COVID-19 to maintain political and social stability and growth momentum.
Belgium is a strategic partner of Vietnam in agriculture. Bilateral trade hit a record of 3.6 billion EUR (3.5 billion USD) in 2021 and 2.5 billion EUR in the first five months of 2022, up almost 26% year-on-year.
Thao expressed his hope that Vietnam, Belgium and the EU will continue enhancing partnerships in multiple areas.
Offering congratulations on Vietnam’s 77th National Day, Jeroen Cooreman, Director-General for Bilateral Affairs at the Belgian Federal Public Service Foreign Affairs, Foreign Trade and Development Cooperation, highlighted the thriving economic links over the past years.
EU initiatives such as the Indo-Pacific and Global Gateway strategies show that the bloc attaches importance to relations with Vietnam and other members of the Association of Southeast Asian Nations (ASEAN), he said, adding he believes that with the experience his country has shared, Vietnam could become a major logistics centre in Southeast Asia.
EU Commissioner for Agriculture Janusz Wojciechowski said the EU highly values Vietnam’s role and potential and wishes to strengthen cooperation in building a sustainable agricultural product supply chain.
The EU will further encourage EU enterprises to invest in Vietnam, especially in agriculture, he noted.
Andries Gryffroy, First Vice President of the Belgian Senate and Chairman of the Belgian - Vietnamese Alliance, spoke highly of Vietnam’s development achievements since the Doi moi (Renewal) period started in 1986, and noted the country has become an emerging dynamic economy in the region./.
en.vietnamplus.vn