The Vietnamese Embassy in Germany held a banquet on September 17 to mark Vietnam’s National Day (September 2), the 47th anniversary of the Vietnam-Germany diplomatic ties (September 23) and the 32nd German Unity Day (October 3). 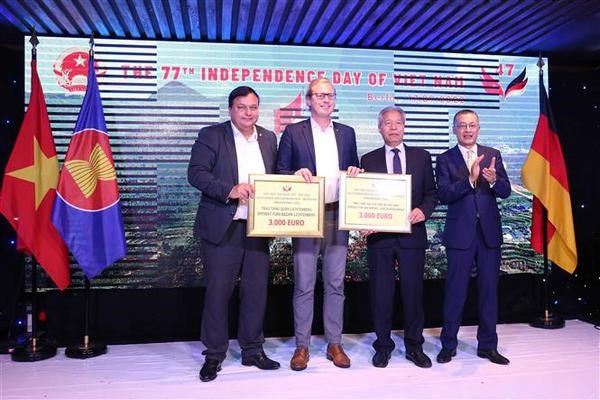 Vietnamese Ambassador to Germany Vu Quang Minh (the first from the right) hands over gifts to representatives of the Lichtenberg district government (Berlin) and the Central Committee of the Vietnam Red Cross. (Photo:VNA)

Addressing the event, Ambassador to Germany Vu Quang Minh thanked the German people for their feelings and support extended to Vietnam during its struggle for national liberation in the past as well as national development process at present.

Vietnam will continue to do its best as a reliable and responsible partner, always attaching importance to its cooperation and friendship with Germany and promoting the strategic partnership between the two countries, he said.

Martin Thummel, Deputy Head of the Department of Asia-Pacific region under the German Ministry of Foreign Affairs said during the COVID-19 pandemic over the past two years, the two countries have provided timely supported to each other with hundreds of thousands of masks given to Germany by Vietnam and 10,000 doses of vaccines donated to Vietnam by Germany. He emphasised that the vaccine donation programme to Vietnam is one of Germany's most successful programmes during the pandemic.

The German diplomat said many German businesses are expected to come to Vietnam to explore investment opportunities.

Germany and Vietnam will continue to promote cooperation in all fields to further promote the strategic partnership between the two countries in the coming time, he said.

Previously, on the same occasion, the Vietnamese Embassy and the Vietnamese community in Germany successfully organised a Vietnam-Germany friendship golf tournament, with the participation of 120 golfers from Vietnam, Germany and other countries.

On this occasion, the Vietnamese Ambassador handed over gifts worth a total of 6,000 euros (donated by donors and golfers) to the German side and to representatives of the Central Committee of the Vietnamese Red Cross to support charitable activities in Germany and Vietnam./.