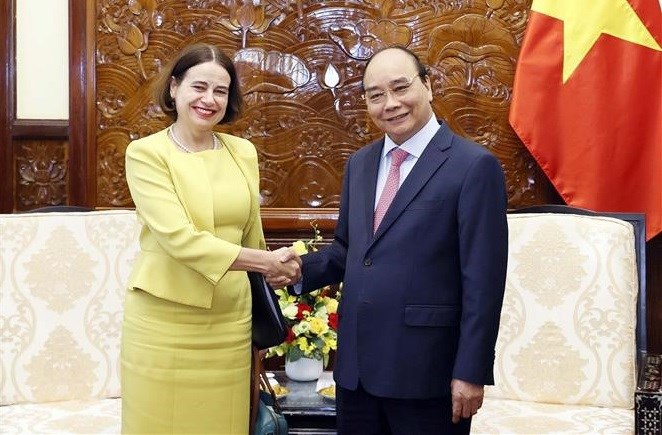 President Nguyen Xuan Phuc (R) and outgoing Australian Ambassador Robyn Mudie at the meeting in Hanoi on June 15 (Photo: VNA)
Hanoi (VNA) – President Nguyen Xuan Phuc received outgoing Australian Ambassador Robyn Mudie in Hanoi on June 15, highly valuing the diplomat’s fulfillment of duties which has helped further intensify the two countries’ strategic partnership.
The State leader said Mudie’s performance during her term has greatly helped the two countries’ relations become more substantive in politics, diplomacy, economy, and trade.
Vietnam and Australia boast not only growing political trust but also increasingly reinforced people-to-people ties, he said, thanking Australia for supporting Vietnam while the Southeast Asian nation served as the ASEAN Chair in 2020 and a non-permanent member of the UN Security Council for 2020 - 2021, and for assisting the transportation of Vietnam’s military personnel and supplies to the UN peacekeeping mission in South Sudan.
President Phuc also appreciated Australia’s donation of over 22 million COVID-19 vaccine doses to help Vietnam quickly and effectively carry out its vaccination campaign.
Mudie said it was her honour to work in Vietnam and that she considers the country as her second home country.
The diplomat promised that in what ever position in the time to come, she will still exert all-out efforts to promote the two countries’ relations, including upgrading bilateral ties to a comprehensive strategic partnership in 2023 when they will celebrate the 50th anniversary of their diplomatic ties.
Mudie noted the Vietnam - Australia enhanced economic engagement strategy, signed last December, has created an impulse for their economic links to become more substantive while opening up many major opportunities for enterprises to partner in such fields as agriculture, energy, education, and digital transformation.
Australian businesses also wish to invest in climate change response and energy in order to help Vietnam achieve net zero emissions, she went on, adding that her country has given comprehensive assistance in gender equality promotion and hopes to continue cooperation in this regard.
At the meeting, President Phuc called on Australia to continue supporting Vietnam’s viewpoint of maintaining peace, stability, security, safety, and freedom of aviation and overflight in the East Sea; protecting the legitimate interests and rights of the parties concerned; and resolving differences by peaceful means, through dialogue, and with respect for international law, especially the 1982 UN Convention on the Law of the Sea (UNCLOS).
He stressed that as cooperation potential remains huge, the two sides should step up ties in such areas as climate change response, digital economy, green growth, and renewable energy.
The leader voiced his belief that in whatever position she will hold, Mudie will also do her utmost for the sake of the countries’ sustainable relations./.
en.vietnamplus.vn