Red Flamboyant Flower Festival – Hai Phong 2022: An important event to enhance the position and prestige of HaiPhong City in the country and over the world

(Haiphong.gov.vn) - On the evening of May 13, at Great Theater square, Red Flamboyant Flower Festival - HaiPhong 2022 was officially opened with the theme: "HaiPhong - The successful destination". 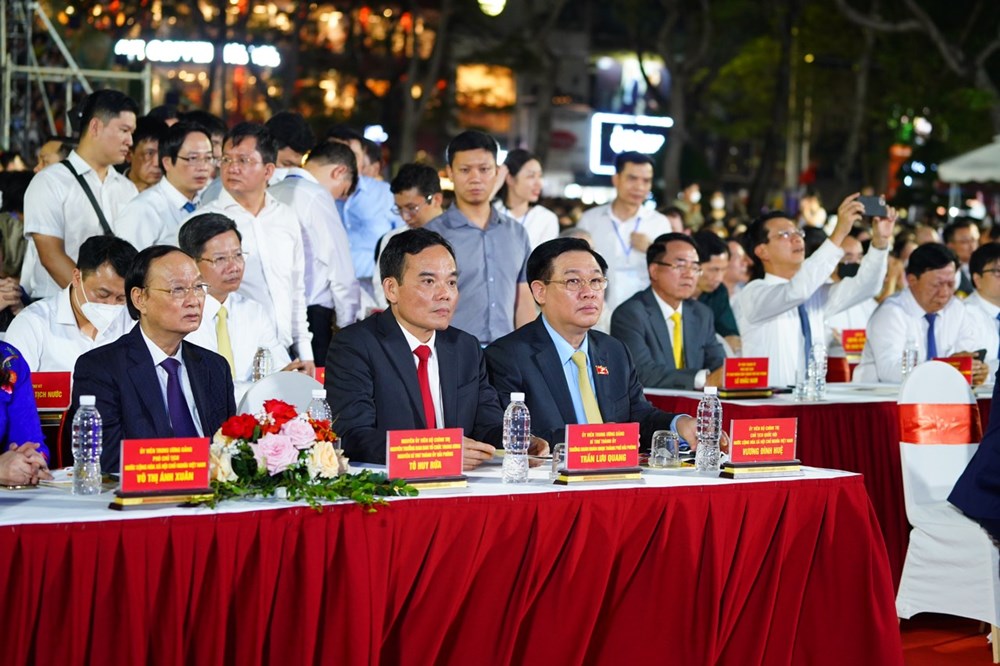 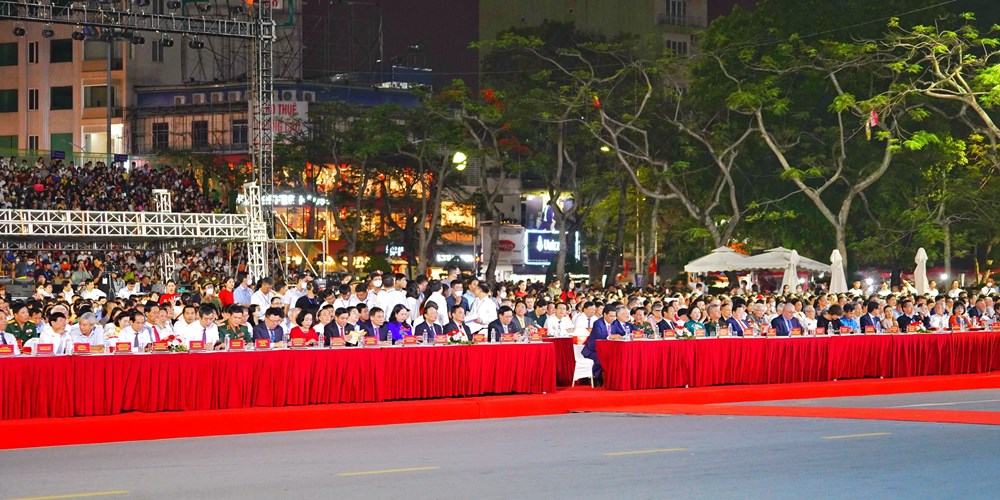 Red Flamboyant Flower Festival - HaiPhong 2022 is an important event to promote, introduce images, build a brand name, enhance the position and prestige of HaiPhong in the country and over the world; promote diversification and improve the quality of tourism products; foster information, advertisement, and tourism promotion;contribute to economic restructure, socio-economic development of the City; strive to exceed the goals and targets of socio-economic development, defense and security of 2022.

After 2 years of delaying the festival due to Covid-19 epidemic, Red Flamboyant Flower Festival - HaiPhong 2022 was held in association with the 67th anniversary of HaiPhong Liberation Day (May 13, 1955 - May 13, 2022) to meet the expectations of HaiPhong people, overseas Vietnamese, domestic and foreign tourists, the enthusiastic supports of donors.

On the occasion of the 67th anniversary of HaiPhong Liberation Day, looking back at the many-thousand-year-long history of the Vietnam nation, HaiPhong has always been a land with an important position. In the process of building and defending the country, HaiPhong was identified by dynasties as "the gateway of imperial city", “the most strategic position”, and a "solid shield" to protect the country. In particular, on the historical Bach Dang river, it has been associated with many glorious and resounding victories of our ancestors to gain national independence. In the revolutionary cause of the Party, HaiPhong continued to be a "going ahead and having benefits later" locality, both the frontline and rear in the resistance wars of the country. In the early years of renovation (doimoi) period, HaiPhong was a locality with many breakthroughs which suggested and contributed to the Central Government to plan strategies for national renovation. In recent years, with the attention of the Party and State, along with the active contribution of domestic and foreign investors, HaiPhong has had strong and breakthrough developments. The Provincial Competitiveness Index (PCI) of HaiPhong City has always improved in recent years, and the following year is ranked higher than the previous year. Notably, in recent years, HaiPhong has succeeded in controlling Covid-19 epidemic, with very high efficiency, and a very low rate of severe cases compared to national average. Giving the opening speech at the festival, Chairman of the City People's Committee Mr. Nguyen Van Tung said: To successfully implement the Resolution of the 13th National Party Congress and Resolution No.45-NQ/TW of the Politburo on construction and development of HaiPhong City to 2030, with a vision to 2045, HaiPhong has taken the theme of 2022 as "Promoting urban embellishment and modernization - Building new exemplary rural areas - Implementing digital transformation”, and achieved many outstanding results.

Specifically, HaiPhong will complete many new ports and airport terminals, continuously improve the transport system with regional connections and complete many new industrial parks to welcome investors; continue to embellish many urban areas and rivers in the inner city; build more new apartments to replace old ones, construct one more green park in each ward, new high-rise car parking lots in the city area and more new urban areas. HaiPhong strives to be in the top localities in digital transformation; continuously takes the leading position in social security for families with meritorious services to the revolution; complete the construction of new exemplary rural areas by 2025, with an average investment capital of 125 billion VND per one commune. Particularly, the City will strive to take the leading position of the whole country in the cause of industrialization - modernization and truly "become a driving force for the development of the whole country". Following the opening ceremony, there was an art program with the theme "HaiPhong - The successful destination". The festival stage was brilliant with majestic and impressive designs, clearly showing the characteristics of HaiPhong City. From there, the festival introduced to domestic and foreign tourists about potential, advantages and outstanding achievements of HaiPhong City in recent years. The art program consisted of 3 chapters: Chapter 1 - Brilliant HaiPhong with flower seasons, Chapter 2 - Aspiration of HaiPhong, Chapter 3 - HaiPhong Carnival with successful destination, through the vibrant and attractive performances of professional singers, artists and actors together with a large number of the city's students. Remarkably, the art parade is a highlight affirming the theme: "HaiPhong - The successful destination", a street carnival on remix music background with models depicting images and honoring the land and people of HaiPhong, honoring domestic and foreign businesses with contributions to changing the appearance of HaiPhong. HaiPhong Miss, Runner-up, Belle of Vietnam beauty contests, after participating in the Ao Dai performance stood on car models, paraded through the festival stage and around Tam Bac Lake so that a lot of people can meet beautiful and talented HaiPhong people, businesses investing in HaiPhong City with many successes. The art program ended with a brilliant fireworks display, spreading the festival atmosphere to all classes of people in the City. 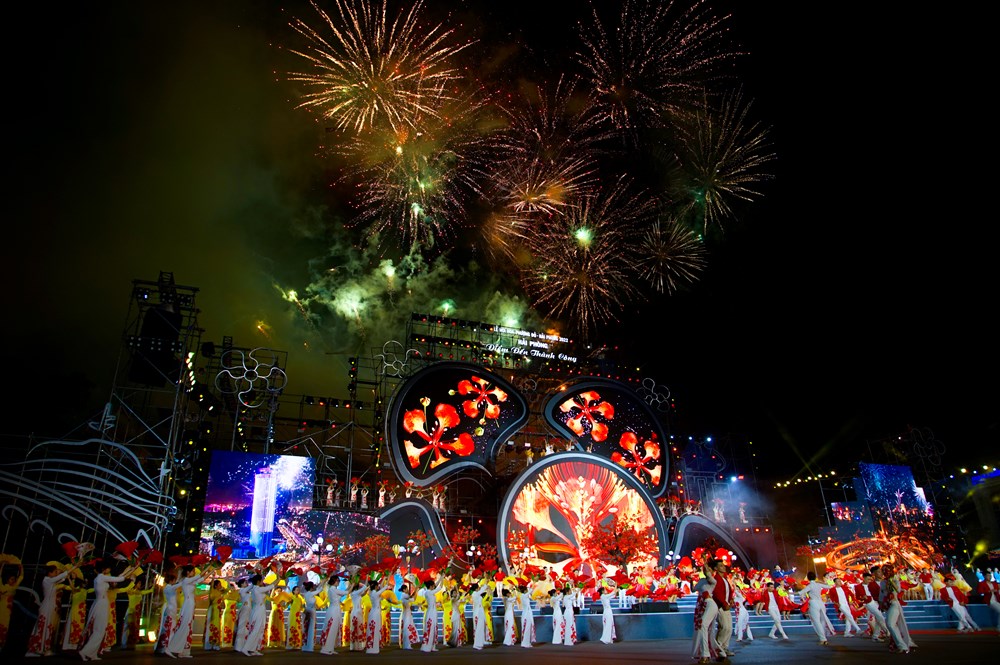 In addition to the main activities of festival, there are 67 typical economic activities (ground-breaking, inauguration ceremony...) of culture, sports, and tourism taking place on the sidelines of the festival in the city's central park areas, centers of districts, and towns. Typical and unique cultural, artistic, and sports activities have taken place and attracted a large number of people and tourists. With careful preparation, HaiPhong City is determined to successfully organize the Red Flamboyant Flower Festival - HaiPhong 2022, affirming that HaiPhong with development desires always be a successful destination with new appearances, new images of a smart, friendly, civilized, polite city for domestic and international friends; creating an atmosphere of excitement, emulation and striving to exceed the goals and targets of the city's socio-economic development, defense - security plan in 2022. Thereby, the festival created a basis and foundation to promote the development of HaiPhong's tourism sector as a key economic sector, contributing to the effective and successful implementation of Resolution No. 45-NQ/TW dated January 24, 2019 of the Politburo on construction and development of HaiPhong City to 2030, with a vision to 2045.