Prime Minister Pham Minh Chinh and his entourage arrived in Hanoi on May 19, successfully concluding their trip to the US to attend the ASEAN-US Special Summit, and to make visits to the US and the United Nations. 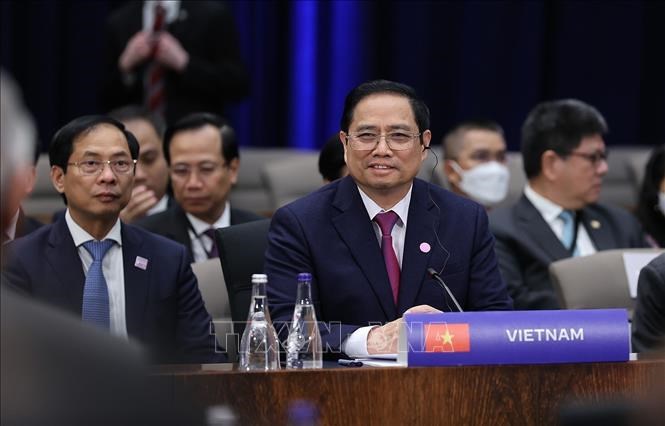 Prime Minister Pham Minh Chinh at the ASEAN-US Special Summit (Photo: VNA)
Hanoi (VNA) – Prime Minister Pham Minh Chinh and his entourage arrived in Hanoi on May 19, successfully concluding their trip to the US to attend the ASEAN-US Special Summit, and to make visits to the US and the United Nations.
The trip has contributed to promoting the relations between the Association of Southeast Asian Nations (ASEAN) and the US, and between Vietnam and the UN and the US, while affirming Vietnam’s role and prestige in the international arena.
During his week-long stay in the US, the PM visited the four cities of Washington D.C, Boston, New York, and San Francisco, with more than 60 activities. He attended and delivered speeches at the summit, and met with ASEAN leaders, including his counterparts from Laos, Cambodia and Singapore, and the Indonesian President.
Chinh also had meetings with UN Deputy Secretary-General Amina J. Mohammed, UNICEF Executive Director Catherine Russel, President of the UN General Assembly Abdulla Shahid and Administrator of the UN Development Programme (UNDP) Achim Steiner.
He met President Joe Biden, and received senior officials of the US government such as Secretary of State Antony Blinken, Secretary of Commerce Gina Raimondo, Secretary of the Treasury Janet Yellen, and National Security Advisor Jake Sullivan, and representatives of some US cities.
The PM visited and delivered speeches at the Centre for Strategic and International Studies (CSIS) and the Harvard Kennedy School, and attended and responded to questions on Vietnam’s economic, political, social and external affairs at seminars, workshops and conferences.
Chinh witnessed the exchange of cooperation documents and agreements between Vietnamese and US agencies and businesses, covering a wide range of spheres.
He had working sessions with leaders of major US groups and Vietnamese firms there, and visited tech giants like Intel, Apple and Google, and the New York Stock Exchange.
Despite his hectic schedule, the PM received US experts, scholars and friends who always love and support Vietnam, and had three meetings with Vietnamese communities in the country.
On this occasion, Vietnamese delegation members, including leaders of ministries, agencies and localities, carried out result-oriented activities.
The trip has demonstrated Vietnam’s consistent policy of independence and self-reliance, for peace, friendship, cooperation and development, the multilateralisation and diversification of relations, being a reliable friend and partner and a constructive and responsible member of the international community, and ensuring the highest interests of the nation, on the basis of the UN Charter and international law, in an equal, cooperative and mutually beneficial manner.
Through his presentations, Chinh also reaffirmed Vietnam’s consistent policy of building an independent, self-reliant economy in tandem with intensive, extensive, pragmatic, effective international integration, with building a socialist-oriented market economy, a law-governed socialist State and a socialist democracy as the pillars.
He emphasised that overseas Vietnamese, including those in the US, form an integral part of Vietnam./.
en.vietnamplus.vn