President Nguyen Xuan Phuc hosted receptions in Hanoi on June 13 for the ambassadors of Croatia and Senegal as they presented their credentials. 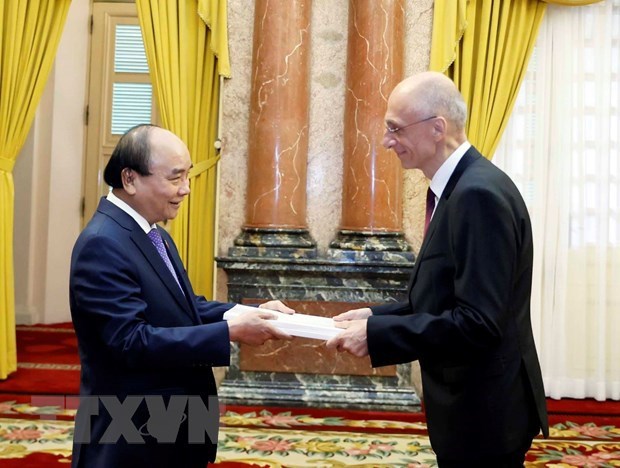 Hanoi (VNA) – President Nguyen Xuan Phuc hosted receptions in Hanoi on June 13 for the ambassadors of Croatia and Senegal as they presented their credentials.

At a meeting with Croatian Ambassador Ivan Velimir Starcevic, President Phuc affirmed the importance Vietnam attaches to consolidating and developing friendship and cooperation with Croatia.

He thanked the Croatian government for its donation of 60,000 COVID-19 vaccine doses to Vietnam last year, which, the leader said demonstrated the good traditional friendship between the two countries.

Starcevic stressed that Vietnam is Croatia’s biggest partner in the Association of Southeast Asian Nations (ASEAN), and that as a EU member, Croatia will work to promote the implementation of the EU-Vietnam Free Trade Agreement (EVFTA).

The ambassador suggested Vietnam and Croatia step up cooperation in tourism.

President Phuc said the two sides should increase the exchange of delegations at all levels to boost cooperation in all spheres, thus deepening and raising the efficiency of the EU-Vietnam comprehensive partnership and cooperation.

Vietnam stands ready to help Croatia enhance its relations with ASEAN and its member countries, he noted.

The leader said the Vietnam-Croatia trade value of only around 100 million USD has yet to match their potential, and urged the two countries to double the revenue in the next five years.

Vietnam is willing to create optimal conditions for Croatian firms to study the Vietnamese market and invest in the country, particularly in renewable energy, transport infrastructure, tourism, environment, food processing, tourism and sports, he said.

While receiving Senegalese Ambassador Abdoulaye Barro, the President emphasised that Senegal is an important traditional African partner of Vietnam.

President Phuc expressed his hope that Senegal will successfully perform the rotating presidency of the African Union (AU) in 2022, and thanked the country for its support for the proposal of establishing the official relationship between Vietnam and the AU.

Barro lauded Vietnam’s role in international organisations and the United Nations General Assembly, as well as its important role in Southeast Asia and Asia at large.

Senegal wants to learn from Vietnam’s experience in agricultural development, he said, adding that Senegal stands ready to support Vietnam in the international arena and always opens door for Vietnamese investors and products.

President Phuc suggested Vietnam and Senegal further support each other at multilateral forums, particularly the UN and the International Organisation of La Francophonie.

The two countries should increase trade and investment exchanges, and coordinate to review and promote the signing of important agreements in order to create a legal framework for the bilateral cooperation, he said.

President Phuc also noted his hope that the Senegalese government will further support the Vietnamese community in the host country./.